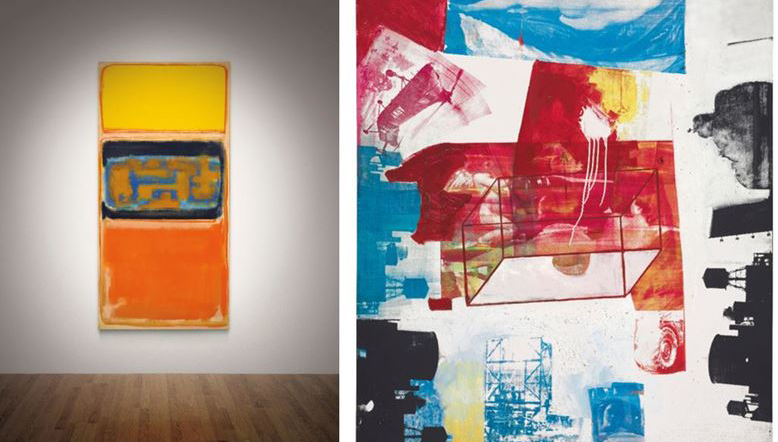 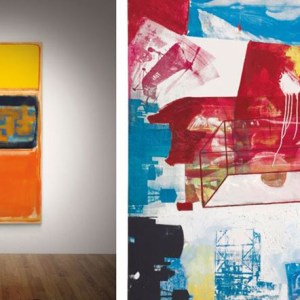 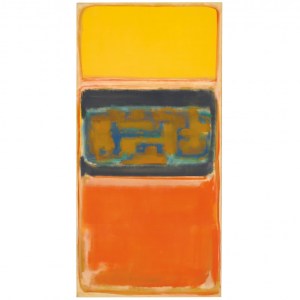 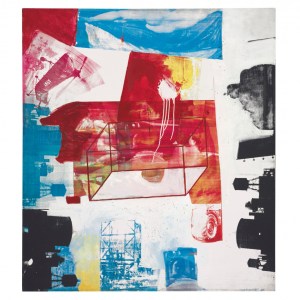 Collectors of abstract expressionism will be given a well-defined focus when seminal selections from Mark Rothko and Robert Rauschenberg highlight Christie’s Post-War and Contemporary Art Evening Auction in London on March 7. Representative of the two artist’s oeuvres will be Rothko’s No.1, an oil on canvas from 1949, and Rauschenberg’s silkscreen painting Transom created in 1963—contrasting works that share the same invitation for introspection and define their artist’s singular style.

The first time at auction, Rothko’s No.1 is an example from his “multiform” period. During this time, he used large vertical canvases to present dominant blocks of color and varying bands of delineation. It was a departure from his earlier influences which included surrealism, cubism, and thematic elements from mythology.

Though mentored by modernist Max Weber and briefly attending Parsons School of Design and the Art Students League in New York, Rothko was primarily his own source of instruction. And though honing his craft since the 1920s, Rothko’s major break came from Betty Parsons who gave him his own exhibition at her eponymous gallery in 1950. Fame followed and his list of patrons came to include John and Dominique de Menil of oil aristocracy. In 1964, the couple commissioned him to design Rothko Chapel as a repository for his work on the Menil Collection campus in Houston, Tex.  Construction was completed in 1971, a year after Rothko’s suicide at the age of 66.

Transom, the other leading lot showcased, illustrates why Robert Rauschenberg has been credited as a pioneer of the Pop Art movement along with the likes of Andy Warhol and Jasper Johns. Famous for his use of disparate materials, including repurposed refuse, for dimensional relief (works referred to as his “Combines”), he also often relied on the silkscreen process to produce. The piece on offer displays the juxtaposition of black and blue water towers, a combat helicopter, and imagery from Rokeby Venus by 15th-century painter Diego Velázquez—a dichotomy of common, classic, and chaotic.

Educated in fine art after leaving the Navy, Rauschenberg was the first American to win the Grand Prix award for painting at the 1964 Venice Biennale. In 2008, Rauschenberg passed away at the age of 82. Two years later, his piece Overdrive (1963) sold through Sotheby’s for $14.6 million. Another, Studio Painting (1961), crossed the block at Christies for $11 million in 2010.

Christie’s Post-War and Contemporary Art Evening Auction will take place at the auction house’s King Street location. The estimated value for each work is available upon request. (christies.com)