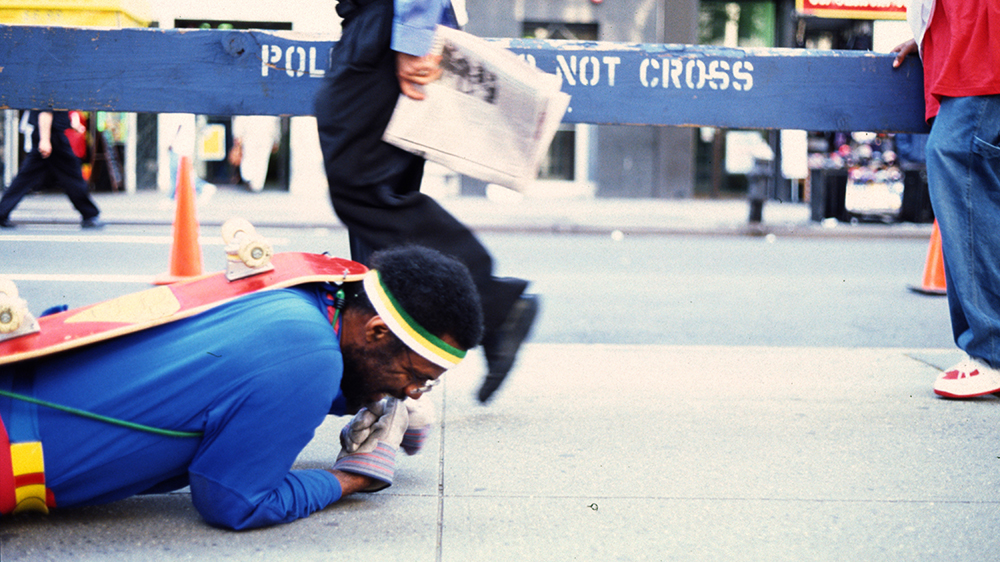 This September, as galleries and museums hope to kick off the fall art season with a bang, African-American artists are leading the most highly anticipated openings. Betye Saar has a show at the Los Angeles County Museum of Art, followed by one next month at the Museum of Modern Art. Pope.L will be triply honored in New York, with exhibitions at the Whitney Museum of American Art and, in October, MoMA; he’ll also present one of his grueling performances, organized by the Public Art Fund. Kehinde Wiley will unveil a monumental public sculpture, Wangechi Mutu’s bronzes will be the first-ever commission for the Metropolitan Museum of Art’s main facade, Theaster Gates will have his first major US museum exhibition of his socially activist work at the Walker Art Center in Minneapolis, and painters Amy Sherald, Ed Clark and Charles Gaines will make their Hauser & Wirth solo debuts with simultaneous shows. Their collective works speak volumes about the moment we are living in.

Wiley’s piece, a 30-foot bronze of an African-American youth—wearing sneakers and a hoodie while astride a powerful steed—questions who deserves to be memorialized. Rumors of War came about after Wiley had a solo exhibition at the Virginia Museum of Fine Arts in Richmond in 2016 and saw the city’s Monument Avenue, a landmarked promenade lined with statues of Confederate leaders plus the late black tennis star Arthur Ashe. Known for substituting African-Americans into old-master-style compositions (and for painting President Obama’s official portrait), Wiley closely modeled Rumors of War after the statue of General J. E. B. Stuart; his reimagined piece will stand in Times Square through the fall before being permanently installed outside the VMFA in December.

“It’s a contemporary statement based on history,” says Alex Nyerges, director of the VMFA. “But it’s looking forward instead of backward.”

Kehinde Wiley, Napoleon-Leading the Army over the Alps, 2005.  Courtesy of Brooklyn Museum

Pope.L has been considering race and society for decades, and his “Crawl” series, in which he dragged his body along city streets, has been a cutting metaphor for the struggle for human rights. On September 21, he tells Robb Report, his piece Conquest will feature “160 people crawling on their bellies through a very nice neighborhood for a good and troubled cause.” While the MoMA exhibition will focus on his early seminal performances, the Whitney will mount an installation titled Choir, which he describes as a “contraption, a device that uses the noise of water to tell a story about the fuss inside our heads today.”

The Met offered Mutu, who was born in Kenya and has long had a studio in Brooklyn, the prestigious commission to fill four niches on either side of the grand Fifth Avenue entrance in part because of “her cosmopolitan perspective, her non-Western perspective,” according to curator Kelly Baum. “Many of us wanted to see a strong artist bring a feminist perspective to a facade that is insistently Western and male. It was important to us to open up the dialogue.”

Amy Sherald, Handsome, 2019.  Courtesy of the artist and Hauser & Wirth

Mutu responded with four kneeling female figures, cast in bronze and patinated with a blowtorch. “They’re very imposing, very stately, very regal,” says Baum, noting that Mutu was inspired by caryatids, sculptures of women used as columns and found in both Western and African art. “There’s also a sense of humor to them.”

The twin shows devoted to Saar may be the sentimental favorites. At 93, Saar is venerated as a longtime force in the making of art about the black experience in America, but she didn’t always get her due. “She had three strikes against her,” says Carol Eliel, senior curator of modern art at LACMA. “She lived in California, and she was a woman of color.”

LACMA’s show will capture Saar’s creative process by pairing her sketchbooks, which will be on public display for the first time, with her completed assemblages, made from everyday objects.

The concurrent exhibitions devoted to prominent African-American artists are no fluke. “You’re seeing the edge of a virtual tidal wave,” Nyerges says. “It is a long time in coming.”