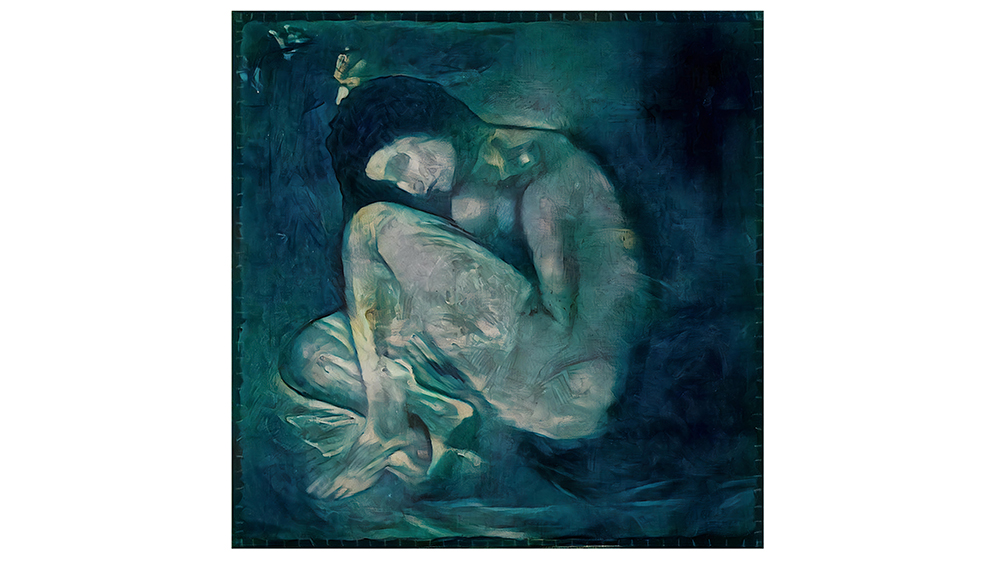 Nearly a half century may have passed since his death but Pablo Picasso still has a trick or two hidden up his sleeve.

A nude figure has been found hiding beneath the oil paint of the Spanish artist’s The Blind Man’s Meal (1903). And we don’t have to wonder what the original work would have looked like thanks to the magic of AI technology.

The image, which is being referred to as The Lonesome Crouching Nude, has been recreated by Oxia Palus after more than a century spent covered up, according to a press release. Its existence was previously discovered by superimposed X-ray fluorescence (XRF) imaging in 2010—it’s even noted in the Metropolitan Museum of Art’s listing for the painting—but the London-based startup, which uses computers to resurrect lost art, has taken things a step further.

In order to recreate the painting, Oxia Palus first used XRF imaging and imaging processing software to build an underlying skeleton. Then AI was used to apply brushstrokes similar to those found in Picasso’s working during the era to fill out the painting. Once done, a heightmap was generated and printed on a canvas using 3D printing to give it the look of a real oil painting.

The Lonesome Crouching Nude dates back to Picasso’s Blue Period, which lasted from 1901 to 1904. The same image of the nude woman pops up elsewhere in his work, most notably in La Vie (1903). If you’re wondering why Picasso would choose to paint over one of his own works, it’s likely due to the fact that he was still a struggling artist at this point and had to paint over the image to save money. As The Blind Man’s Meal is one of his most famous pieces from this era, he made the right choice, but it’s interesting to see what could have been.

“I hope that Picasso would be happy in knowing the treasure he’s hidden for future generations is finally being revealed, 48 years after his death and 118 years after the painting was concealed,” Oxia Palus co-founder George Cann said in a statement to Robb Report. “I also hope that the woman within the portrait would be happy in knowing that she hadn’t been erased from history and that her beauty was finally being revealed in the 21st century.”

If you happen to be in UK capital you can actually check out Picasso’s AI-generated painting for yourself. The 3D printed canvas is set to be on display at the Deeep AI Art Fair in Shoreditch, located in East London, from Wednesday to Sunday.

If you miss it, don’t worry. For better or worse, this is just the beginning of AI-generated masterworks, if Oxia Palus has anything to say about it.