By Sheila Gibson Stoodley on December 1, 2014 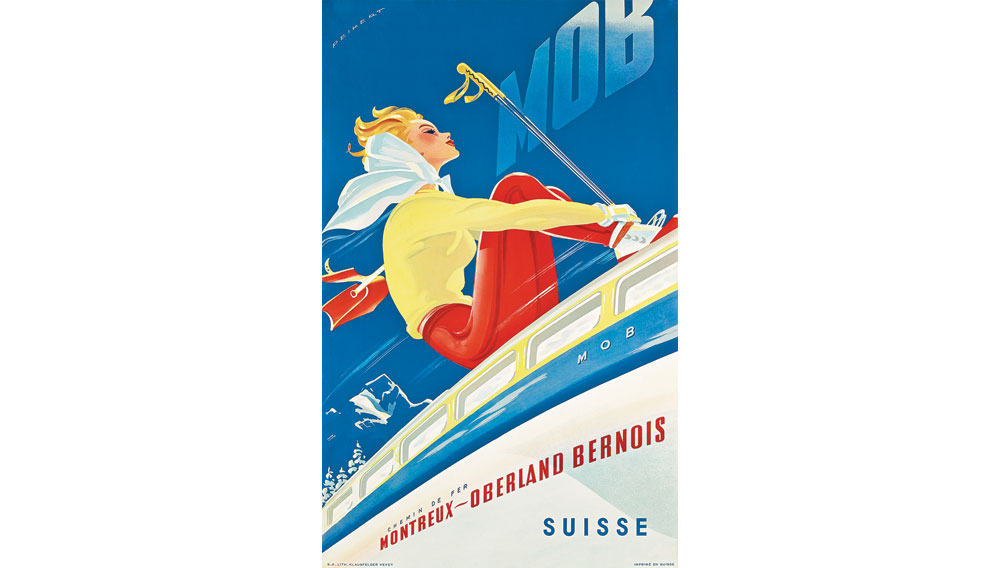 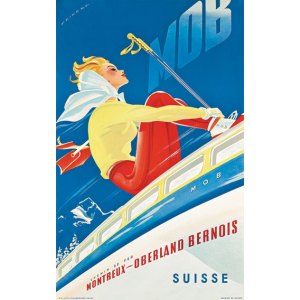 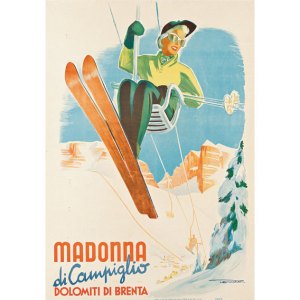 Owning a ski Chalet is not a prerequisite to acquiring a vintage ski poster, but it is something that many buyers have in common, says Nicholas Lowry, president and principal auctioneer of Swann Auction Galleries in New York. “What distinguishes ski posters is not necessarily how they look, but how they’re used,” says Lowry, who is also the head of Swann’s vintage-posters department. “You can buy a poster of an ocean liner, but you can’t hang it in your own ocean liner. You can buy a poster of a car, but you can’t put it up in your car. But you can put a ski poster in your winter home.”

In the world depicted by vintage ski posters—those produced in the early- to mid-20th century—the skies are blue and cloudless, the powder is pristine, and the mountains are free of shivering hordes waiting impatiently in lift lines. It is not surprising that skiers want these idyllic images hanging on the walls of their chalets.

On December 17 in New York, Swann will conduct a sale of travel posters from the Julius Paul collection that will include at least six skiing- or winter-themed vintage posters. The South Kensington, London, branch of Christie’s will have its annual ski-poster sale on January 22. Launched in 1998 by Nicolette Tomkinson, head of Christie’s 19th- and 20th-century poster department and an avid skier herself, the auction typically offers more than 200 poster lots. (Vintage Louis Vuitton luggage was added to the lineup in 2013.) Tomkinson says that usually about 95 percent of the auction’s bidders are skiers.

Attractive as the images are, ski posters were never meant to become collectible art. They were produced as marketing material designed to lure vacationers to the destinations they depicted. They were not intended to last, and the vast majority were torn down, pasted over, or just thrown away when the season changed and it was time to tout summer resorts. Posters that have survived and are in good to excellent condition are scarce.

In addition to condition, factors that influence a poster’s value include the visual power of the image and the reputation of the artist; the poster with the highest presale estimate ($24,000 to $32,000) in the Christie’s sale is Golden Mountain, Pullman Express. It was created around 1930 by Roger Broders, a favorite of collectors.

The factor that can have the greatest impact on a poster’s value is geography. If the poster clearly and boldly spells out the name of certain places—Gstaad, St. Moritz, Davos, Klosters, Chamonix, Stowe, Sun Valley—its price may soar. “If a St. Moritz poster sells for a price that takes your breath away, you can bet the bidder has a house in St. Moritz,” says Lowry. “Where you ski is what you want.” Then he adds, “If you can afford a ski chalet, you can afford a poster, and you’re unlikely to be cowed by competition.”

Less Than a Third of Retailers Paid 75% of Rent in June, With a Majority in Favor of Rental Assistance

Face Shields vs. Face Masks: Which One Offers Better Protection Against Covid?