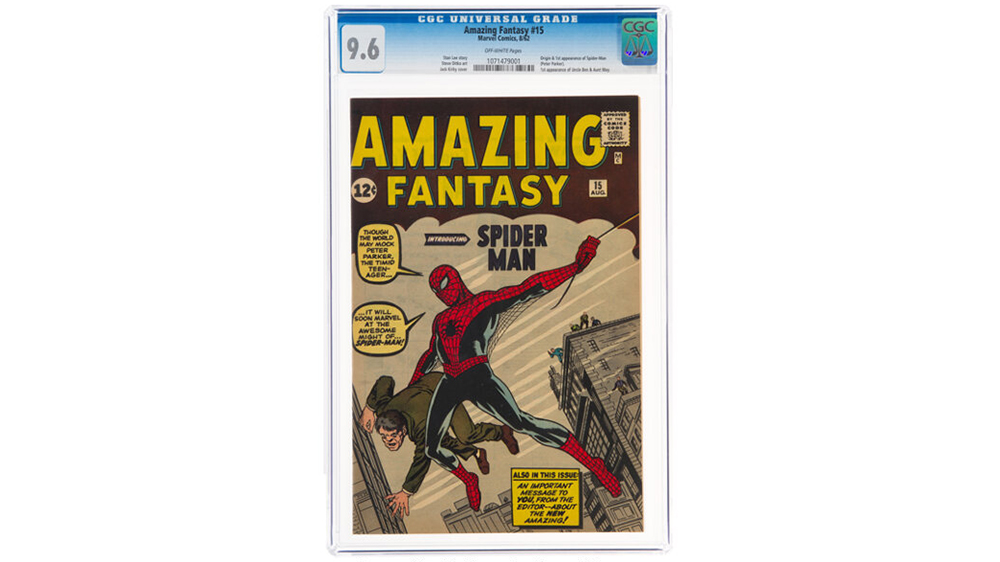 Spider-Man may not be able to beat Superman in a fight, but his comic book debut just did.

Amazing Fantasy no. 15, the comic book in which the wall crawler and his alter ego, Peter Parker, first appeared, sold for a record-setting $3.6 million on Thursday as part of Heritage Auction’s Signature Comics & Comic Art sale. The gavel price easily bests the previous record of $3.6 million, which was set by a copy of Superman’s debut, Action Comics no. 1, earlier this year.

Amazing Fantasy originally launched in June 1961 as a science fiction anthology under the title Amazing Adventure. With the comic slated for cancellation in July of the next year, writer Stan Lee and artist Steve Ditko (although the iconic cover was drawn by Jack Kirby) were given free reign for the book’s final issue. The result was a story about Peter Parker, a teenage boy who gains super powers after being bitten by a radiated spider, but fails to use them to stop a robbery, resulting in the death of his Uncle Ben. Chastened by his selfishness, Parker decided to use his powers for good and become Spider-Man. The issue proved to be a hit with readers, and though the comic was still canceled, the character would get his own title, the Amazing Spider-Man, in March 1963. The rest, as they say, is history.

The back of “Amazing Fantasy” no. 15  Heritage Auctions

This particular copy of Amazing Fantasy no. 15 has been graded a 9.6 by Certified Guaranty Company, and is one of just four near-mint copies still said to exist. There are no known copies in better condition. The previous record sale price for a copy of the comic was $1.1 million. That example also had 9.6 rating and sold in May of 2011. That’s a jump of over $2.5 million in just over a decade.

Prices for comic books—like other collectibles—have soared over the last year. In addition to record-setting sales for Amazing Fantasy no. 15 and Action Comics no. 1, a copy of Batman no. 1 hammered down for $2.2 million in March, while X-Men fetched $807,500 in July. It shouldn’t be a surprise, though. As Hollywood has found out over the last decade, superheroes are big business.