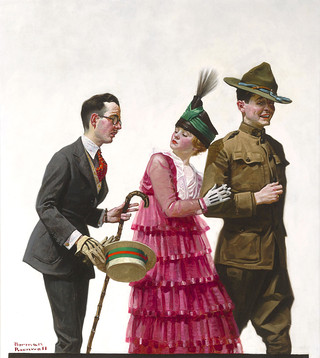 Excuse Me by Norman Rockwell at M.S. Rau Antiques

One of the most renowned American artists, Norman Rockwell captured the spirit of our nation as no other had before, and his patriotic compositions like this oil on canvas are among his most desirable. Entitled Excuse Me, the work depicts a young woman snubbing a wealthy gentleman in favor of her soldier suitor. The work encapsulates the patriotic fervor of the nation during the First World War, providing a fascinating window into American ideology in the early 20th century. This painting was featured on the cover of the July 1917 issue of Judge magazine.