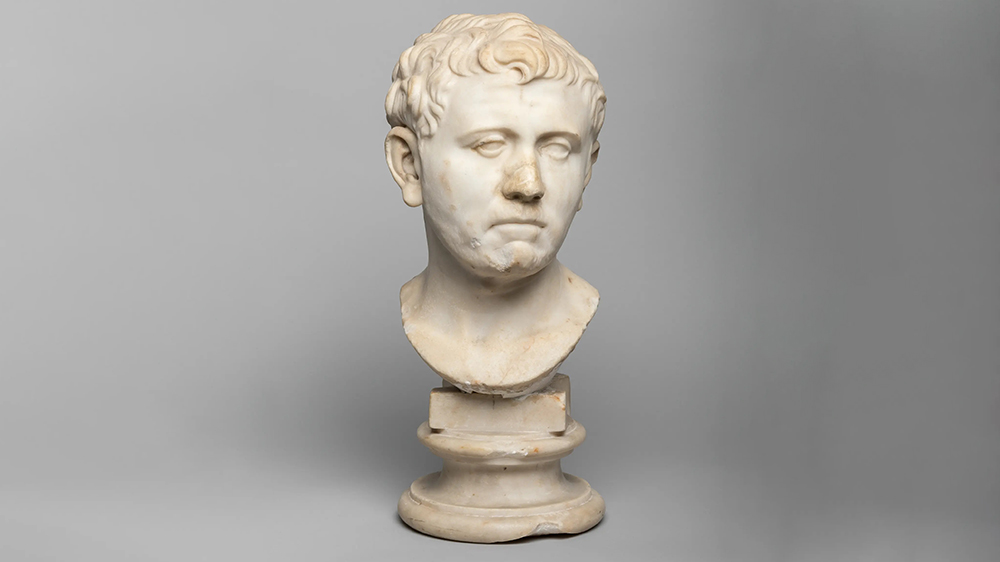 Courtesy of the Bavarian Administration of State-Owned Palaces, Gardens and Lakes

In 2018, Laura Young, the owner of vintage good shop in Austin, Texas, spotted a carved marble bust priced at $34.99 in a local Goodwill. At 52 pounds, it was heavy, and it looked old.

An expert examination revealed that it was, in fact, ancient. It dated back to the 1st century CE—and had once belonged to the collection of King Ludwig I of Bavaria.

Four years later, the ancient Roman bust, which may depict Roman commander Drusus Germanicus, will be returned to Germany’s Bavarian Administration of State-Owned Palaces, Gardens and Lakes. In a signal of the institution’s gratitude, it will be installed under a plaque bearing Young’s name.

Before it goes back to Germany for good, the bust will spend a year on view at the San Antonio Museum of Art, which supported the identification and reunion of the bust with Bavarian authorities. During that time, Jessica Powers, interim chief curator of the art of the ancient Mediterranean world at the museum, will help identity the subject of the artwork. The bust is now on view at the Texas museum, and will remain there through May 21, 2023.

How the bust traveled from Bavaria to Austin is another mystery that will need to be unraveled.

Researchers know it was looted near the end of World War II from the Pompejanum, a mid-19th century full-scale replica of a Pompeiian villa built by King Ludwig I in Aschaffenburg, Germany. After the end of the war, the U.S. Army stationed troops in Aschaffenburg. Many of them remained there throughout the Cold War.

According to the San Antonio Museum of Art, a retuning troop may have smuggled the portrait back to America. In the decades between, someone dropped it at the backdoor of the Austin Goodwill.

“My husband and I were on a road trip when I got an email from [the auction house] Bonhams confirming the head was indeed ancient Roman, but without provenance they could be of no further assistance. Soon after that, Sotheby’s got in touch,” Young said in a statement.

Young was advised not to attempt to sell the work at auction, or through private channels, as U.S. state law does not recognize the transfer of title of stolen property.

“There were a few months of intense excitement after that, but it was bittersweet since I knew I couldn’t keep or sell” the sculpture, Young continued. “Either way, I’m glad I got to be a small part of [its] long and complicated history, and he looked great in the house while I had him.”

Young and her legal counsel contacted Bavarian authorities about the restitution of the bust. The Bavarian government agreed to cover all costs accrued in transporting the artifact to Germany, and agreed to a short-term loan arrangement with San Antonio Museum of Art.

Emily Ballew Neff, the museum’s director, said in a statement, “It’s a great story whose plot includes the World War II-era, international diplomacy, art of the ancient Mediterranean, thrift shop sleuthing, historic Bavarian royalty, and the thoughtful stewardship of those who care for and preserve the arts, whether as individuals or institutions. We are so pleased that the Bavarian Administration of State-Owned Palaces agreed to allow us to have the sculpture on view at SAMA before it returns to its rightful home. A wonderful example of international cooperation, this is another critical way in which our art museums participate in diplomacy around the globe.”