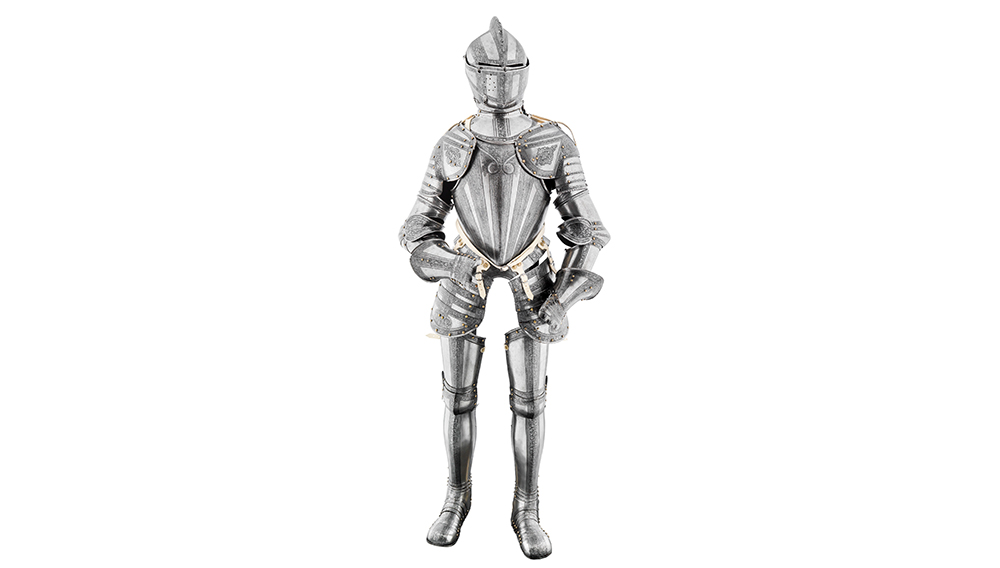 Six ancient helmets and 10 suits of armor—all from Italy and Germany—a collection of a European Prince, an important collection of American Firearms plus a copper saucepan rescued from Sebastopol in 1855 are among the array of objects offered in Thomas Del Mar Ltd’s auction of Antique Arms, Armor and Militaria at 25 Blythe Road, London W14 on Wednesday, December 2, 2015.

Thomas Del Mar Ltd – which was founded 10 years ago – holds two sales each year. The forthcoming sale in December comprises over 500 lots from the bronze age to the early 20th century, with pieces from ancient Greece, Persia, Europe’s middle ages and renaissance, tribal African and Australia and the American civil war.

The 10 suits of armor from Italy and Germany are being sold by order of the Trustees of the John Woodman Higgins Armory Collection to benefit its ongoing study and display at the Worcester Art Museum. Over the past three years, Thomas Del Mar has sold £2.5million of items on behalf of the Woodman Higgins Collection. With estimates up to £20,000 and dating from as early as the 15th century, examples include a composite North Italian cap-a-pie armor with etched decoration dating from the late 16th century which is estimated at £15,000-20,000 and a composite North Italian field armor with later etched decoration dating from mid-to late 16th century which is expected to fetch £12,000-18,000.

One of the more unusual items is a Crimean copper saucepan, taken at Sebastopol – inscribed ‘taken from the ruins of Sebastopol, the day after the fall Septr. 9th 1855 by A Farquharson, cook of the S. S. Imperartix’ (Estimate: £150-200).

An important private collection of American firearms also includes swords that belonged to members of 29th New York State Volunteers Regiment (Astor rifles) and 139th regiment New York Volunteers. A .40 calibre sharps model 1874 ‘old reliable’ Schuetzen rifle, circa 1877, probably made as a test piece or prototype is expected to fetch £6,000-9,000, while a Fine .400 Calibre Borchardt Patent Sharps Model 1878 Rifle, Sold to Hugo Borchardt, Patentee of the System and Superintendent of the Sharps Rifle Company is estimated at £3,000-5,000.

Firearms included the property of Wesley I Paul, former Chairman of the Board of Trustees of the Royal Armouries such as a fine cased pair of 40 bore percussion rifled duelling pistols by J. Purdey, dating from 1834 is estimated at £15,000-20,000, while a cased pair of 40 bore percussion rifled duelling pistols by John Manton & Son, Dover Street, London, circa 1822 carries an estimate of £10,000-15,000. These are being sold with a transcript of a letter from leading expert David Back stating that these appear to have been made in 1825 and are the earliest recorded pair of pistols by John Manton to use copper caps. Elsewhere a very rare 32 bore Irish hand rotated seven-shot revolving carbine by W. & J. Rigby, Dublin, circa 1838, which sold for £34.13.0 to S. Crothwaite in 1838 is estimated at £7,000-10,000.

Several important swords include a Ceylonese silver-mounted shortsword presented to the Right Honorable Sir William Henry Gregory, K.C.M.G., 14th Governor of British Ceylon (1872-1877), from Mrs Alwis, circa 1872-90, which carries an estimate of £3,000-5,000 (See bottom of the release for Biography). A Royal Highland dirk inscribed for King Peter II of Yugoslavia (1923-70) – the godson of King George VI and Queen Elizabeth The Queen Mother – is expected to fetch £1,000-1,500.

A Brunswick State two-hand processional sword of the guard of Julius, Duke of Brunswick and Lüneburg in Wolfenbüttel (1528-89), dated 1573 is expected to fetch £7,000-9,000. Duke Julius of Brunswick-Wolfenbüttel (1528-1589) inherited the title following the death of his two older brothers in battle. He was a keen supporter of the Reformation and introduced it into the Duchy of Wolfenbüttel.

Thomas Del Mar Ltd  was founded in 2005 and has been holding sales biannually entitled “Thomas Del Mar Ltd in association with Sotheby’s” since then. Thomas was formerly Head of Sotheby’s Worldwide Department of Arms, Armour and Militaria and assisted Sotheby’s with sales in London, New York, Denmark, Zurich, Billingshurst and Hanover. The sale of works of art from the Royal House of Hanover included arms and armour which sold for £4,764,004 ($8,392,610) which continues to stand as a World Auction Record for an ancestral collection in this field. Thomas continues to work as a Consultant to Sotheby’s on valuations and sales of major collections. Thomas Del Mar Ltd gratefully acknowledges the specialist contribution of Nicholas McCullough as cataloguer of the Langenburg armoury.

25 Blythe Road, founded in 2007 by Arms and Armour specialist Thomas Del Mar, is a collective of highly experienced specialists many of whom who have worked at Sotheby’s who organize auctions twice a year under their own names. The specialists will willingly sell good quality low value lots to open up the doors to first time collectors, starting at £50, going up to many tens of thousands. Curators, collectors and dealers from around the world buy from the various fields of expertise. ! The auctions include Photographs, Posters, British & Continental Pictures, Decorative Works of Art which includes Silver, Ceramics, Jewellery and Objects of Vertu. Also Antique Arms, Armour & Militaria, and Maritime and Scientific Models, Instruments and Works of Art. Each auction is preceded by viewing days at the 25 Blythe Road Gallery.