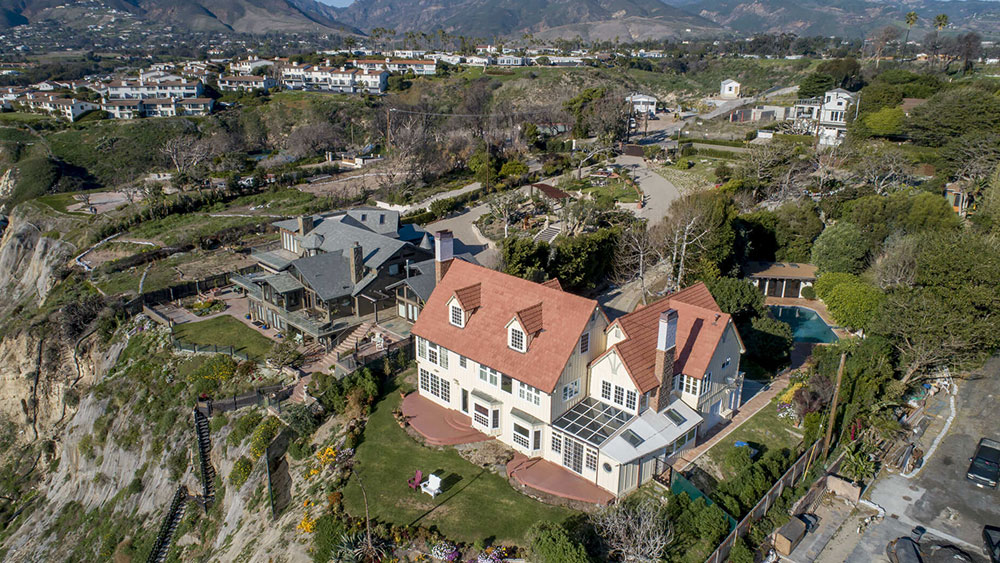 Courtesy of the Agency

You can almost hear the thrum of bulldozers idling in the street, waiting for the ink on the contract to dry before swinging their wrecking balls to commence demolition.

Yes, Oscar-winning actor Anthony Hopkins is selling his longtime Malibu, Calif. beach house. But the chances of any buyer actually moving in furniture are slim.

No, think of the $11.5 million asking price being for the prized, one-acre of land and its coveted, spectacular position high on a Point Dume bluff overlooking the crashing Pacific, migrating whales and what is arguably Malibu’s best stretch of sand, Westward Beach.

That, and the fact that it’s just a stone’s throw from the calm of Paradise Cove and less than an hour’s drive to downtown Los Angeles. Depending on traffic.

As a result of the erosion, the home’s front lawn has shrunk to little more than a tiny, unprotected triangle of grass, with steep, dangerous-looking drop-offs on two sides. No, not a good spot for the kids to play soccer.

But with much of the lot’s one acre at the rear of the house—right now there’s a pool, cabana, stand-alone guest house and large parking area back there—building a new home further back would unlikely pose a problem. Except you might be competing for construction permits with Malibu homeowners who lost structures in the 2018 Woolsey fire.

That Hopkins’s house is even standing today is something of a miracle. That November, flames from the fire came close, completely destroying the house right next door.

Among the 97,000 acres and 1,643 structures incinerated in the blaze were the nearby homes of other actors, Gerard Butler, Kim Basinger, Liam Hemsworth and Miley Cyrus, and singers Robin Thicke and Neil Young.

According to property records, The Silence of the Lambs actor, now 82, bought the house on Birdview Avenue 19 years ago for $3.8 million. Built in 1958, the rambling structure features five bedrooms, five baths plus that hidden-away, one-bedroom guest house.

The kitchen.  Courtesy of the Agency

The home’s pool cabana is where Hopkins reportedly set up an art studio. Check out his website and you can see some of his paintings of Malibu, no doubt created from that studio.

But one thing’s clear: Looking at the interior photography of the main house, the much-loved actor spent little of his earnings on renovations. The rooms still have a ’50s vibe with a mixed bag of wood and terracotta tile, basic maple kitchen cabinetry, low ceilings and a rather strange metal spiral staircase going up to the third floor from the middle of a room.

The living room.  Courtesy of the Agency

Which is surprising considering how much the Welsh actor and his wife Stella Arroyave are spending on property in the nearby Pacific Palisades neighborhood.

Back in December 2018, they reportedly shelled out $6.6 million for a 5,778-square-foot, super-contemporary, spec home in the Bluffs section of the Palisades. Then, last March Hopkins quietly dropped another $6 million on the house next door.

Beautiful paned windows let in the sun.  Courtesy of the Agency

The task of finding a buyer for the Point Dume oceanfront home is down to listing agent Santiago Arana, of high-profile brokers the Agency.

The master bath.  Courtesy of the Agency

That odd staircase.  Courtesy of the Agency

Westward Beach is one of Malibu’s best.  Courtesy of the Agency