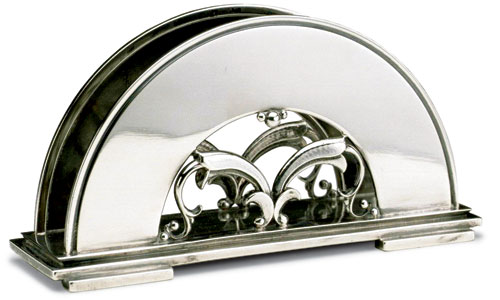 Alastair Crawford holds a large silver platter in his hands and tilts it to show the subtle detail that marks the piece as a product of the Georg Jensen silversmith workshop. Direct light transforms lesser-quality platters into a uniform sheet of blinding white, but when the rays hit the Jensen platter, they reveal innumerable shimmering circles that overlap each other and cover the flat surface. Jensen called this effect “the moonlight glow.”

“You have to hit [a platter] quite hard, using a round hammer [to create the circles]. It’s a day’s worth of work,” says Crawford, managing director of the Silver Fund, an 8-year-old concern that deals solely in vintage Jensen flatware, hollowware, and jewelry. (The company is not affiliated with Georg Jensen.) “It’s a real Jensen signature, the hand-hammering.” This attention to even the least obvious features won countless admirers and customers for Georg Jensen, which was founded by its namesake in 1904 in Copenhagen, Denmark. While Jensen’s talent for metalsmithing was evident in his youth, he aspired to a different calling, and he continues to declare his preference long after his death: Engraved below the name and the dates (1866–1935) on his gravestone is the word sculptor. “That’s what his abiding love was, and you can see it in his work,” says Crawford. “It’s as close to art as silver can get.”

Michael James, co-managing director of the Silver Fund, concurs. “Most other silver was made for a utilitarian purpose and then decorated. With Georg Jensen, the sculptural quality is apparent,” he says. “When he designed the Blossom tea service [the Blossom motif debuted on a teapot in 1905 and evolved into a pattern that the company continues to produce], he made the blossoms look like they grew in the ground. They’re earthy and natural-looking. You want to pick them up and caress them.”

The Georg Jensen company, which reached its centenary this year, has encouraged such artistry by allowing designers to sign the pieces they create. This practice, says Christie’s silver specialist Jennifer Pitman, has its roots in the Arts and Crafts movement, which was ascendant when the workshop opened. The creative license and public recognition offered by Jensen proved attractive for talented designers such as Harald Nielsen and Henning Koppel. “That’s the secret to its popularity, and why it remains so successful,” Pitman says. “It’s very hard for a firm to remain current for a long period, but Jensen employed designers who were allowed to create freely, and it gave them credit for their work.”

Collectors covet early examples of Jensen silver made by the master himself or under his supervision, as well as pieces inset with precious stones and those that were produced in limited numbers. Among the most valuable of these items are chandeliers. Jensen is believed to have produced fewer than 20 during his lifetime, and the Silver Fund sold one at auction earlier this year for $320,000.

Those who wish to own rare Jensen pieces need to display patience before they can display their treasures. “The biggest problem with Georg Jensen is not the price; it’s finding it,” says Crawford. “The really great stuff is in private collections all over the world, and some collections never come on the market. People who acquire Jensen silver tend to be wealthy and tend to hang on to it.”