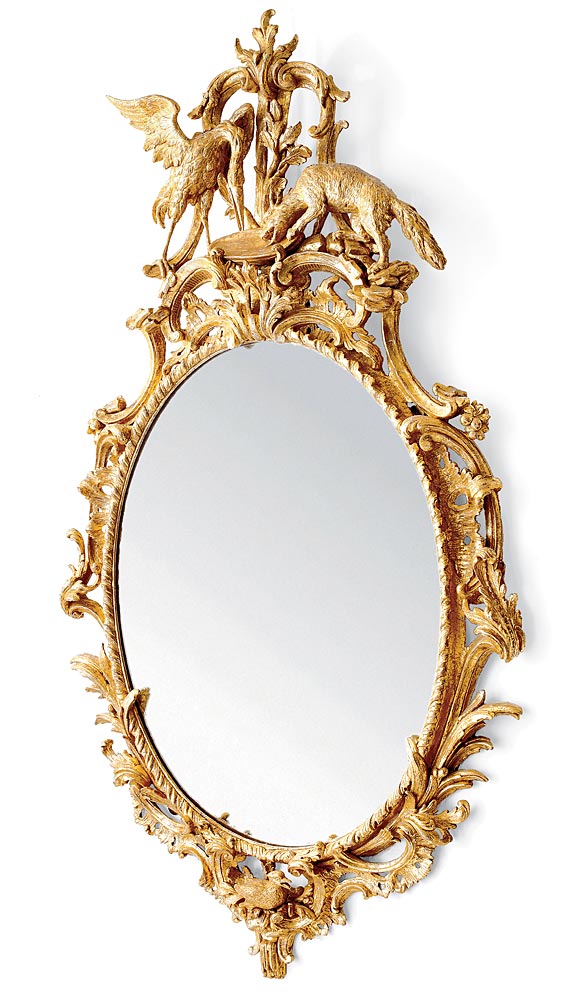 “Johnson was a carver, as opposed to Chippendale, who was a cabinetmaker,” says Matthew Imberman, of Kentshire Galleries in New York, who has acquired a pair of circa-1755 mirrors by the master carver. “His designs were incredibly distinctive.” According to Imberman, Johnson’s private life seemed to mimic his quirky art: His studio on Grafton Street in London was dubbed Golden Boy, he had a sometime apprentice by the name of Hercules Courtenay, and—whether a result of the era’s political climate, Johnson’s own prejudices, or perhaps a mere competitive streak—he tended toward fierce anti-Gallican sentiments.

The mirrors, which illustrate scenes from “The Fox and the Stork,” are priced at $675,000. Framed by scrolling leaves and flowers, each is decorated with different vignettes from the fable, their variations—as well as their provenance—rendering them all the more valuable. For the sake of comparison, the gallery owners point to a pair of circa-1765 giltwood mirrors—lacking provenance yet resembling the work of Chippendale or William Linnell, another mid-18th-century carver—which sold for $408,000 at a Sotheby’s auction last year.

The Johnson mirrors’ provenance includes stints with Lord Duveen of Millbank, one of the most influential art dealers of the 20th century, and Douglas Dillon, secretary of the treasury under President Kennedy. Dillon’s personal interest in the arts led to posts as president, and then chairman of the board of trustees, of the Metropolitan Museum of Art. In their journey from the shop on Grafton Street to the Kennedy Cabinet to Kentshire, the mirrors are believed to have never been separated. “Sometimes collectors have two mirrors and two children—it’s as simple as that,” Imberman says. “It is hard to imagine that these would have been separated and then reunited. When you couple that with a great provenance, it makes for a real home run.”

The only other piece by Johnson that is currently on the market is a marble-topped giltwood console offered by London-based Ronald Phillips Ltd.; it bears the same telltale curls, tendrils, and avian themes as Johnson’s other works. “Currently, I’m enjoying it in my private office,” says owner Simon Phillips, who is offering the table for roughly $170,000. “There’s a lot going on for such a small piece—it’s like a bit of jewelry.”

Both Phillips and Imberman are aware of the existence of one another’s rare Johnson finds. “There is sadly only one table and a pair of mirrors,” Phillips says. “They would still make a great combination.”

For his part, Imberman speculates that the mirrors could have been made to hang above a console table like Phillips’ “or as part of a whole suite of gilded furniture. They are something we are extremely privileged to possess and something you will likely see only once.”