“The blacker the better,” Eric Streiner says as he lifts a heavily tarnished Tiffany & Co. jug from a table in the living room of his Manhattan apartment. “See the detail?” he asks, pointing to raised depictions of sea grasses, butterflies, dragonflies, and trout that ornament the jug. Unlike the body of the piece, which is silver, these decorations are made from gold, platinum, brass, and copper that have been applied to the silver. A polishing cloth would set the jug aglow, but its dark patina serves a purpose. “Polishing can rub the detail right off the piece,” explains Streiner, a 35-year-old dealer of coins and art whose apartment holds at least 40 other Tiffany mixed-metal jugs, vases, boxes, and other items. “Think of what happens to the face of a quarter over time. Same thing here, only you’d be rubbing away precious metals, eroding their integrity.”

Tiffany’s craftsmen created the pieces in Streiner’s collection during the Aesthetic Movement, a period that lasted from about 1870 to 1890. The movement followed American commodore Matthew Perry’s 1853 visit to Japan, which opened the country to the West. Once trading began, Japanese art displaying such treatments as mixed metal arrived in America and England and influenced those countries’ decorative arts and design. Indeed, Tiffany’s chief designer at the time, Edward Moore, stocked the company’s New York studio library with Japanese design books and wood-block prints to further inspire his colleagues.

Collectors rediscovered Tiffany mixed metal during the 1960s, and now even the smallest items fetch high prices. “Each piece is different, and each piece speaks to you for different reasons,” Streiner says of his collection. “I look for the piece with the strongest design. I look for something I’ve never seen before. Like this,” he says, raising a flask bearing an abstract pattern in applied gold. “You’ll never see anything like this again. It’s totally unique.”

Streiner, who often is alerted by auction houses about choice lots of silver that will appear in their future sales, learned late last year that Sotheby’s New York was planning to offer in January a tea service that Tiffany had made in 1885 for the Westinghouse family. “The tea set itself didn’t really interest me,” says Streiner, who declined the invitation, “but the tray was another thing.”

The seven-piece Westinghouse service displays what is called the parcel gilt technique: The coffeepots, milk jug, and sugar bowl are decorated with pieces of silver that were gilded or covered with other metals. The irregularly shaped square tray, however, is a mixed-metal collector’s dream. It has been etched with a giant spider web, and the spider at its heart is a brilliant inlay of copper, Japanese gold, platinum, and niello, a black-colored alloy of sulfur, silver, copper, and lead.

Sotheby’s opened bidding for the Westinghouse service at $150,000. Moments after London silver dealer Anthony Marks secured it for $380,000, a woman whom he had bested in the contest approached him. When she learned that Marks was a dealer, not a collector, she gingerly asked if he might be interested in selling her the tray. “Oh no,” said Marks, “I have no plans to separate the set.” However, he certainly understood her having to ask.

The tray from the Westinghouse tea set, which recently sold at a Sotheby’s auction, is a mixed-metal masterpiece. 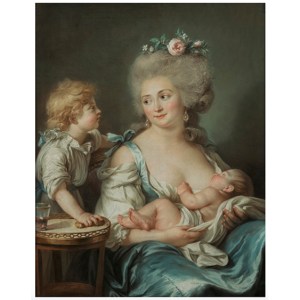 The Getty Museum Just Bought This Adélaïde Labille-Guiard Work for a Record-Setting $764,000 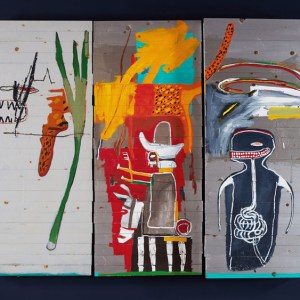 This Basquait Painting Became an Iconic Magazine Cover in 1985. It Just Sold for $37 Million.