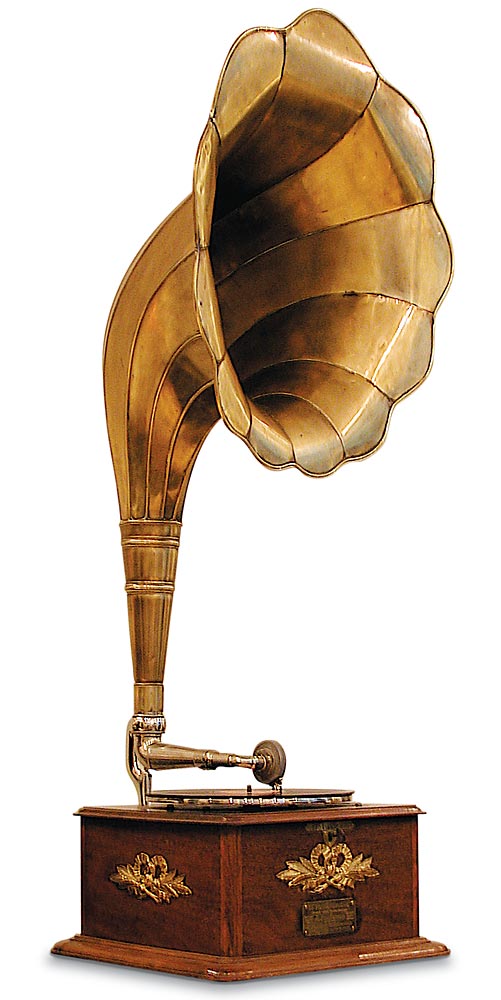 Jalal Aro places a wax cylinder onto one of the record players in his Paris shop and invites his guest to listen. The music, a violin solo, sounds clear—surprisingly so, considering that the cylinder was made in 1912 and that the player is a circa-1918 model designed by Thomas Edison. “If the cylinder is perfect and the reproduction is perfect, you don’t have the sound of the crackle and pop,” explains Aro, the 41-year-old Frenchman who owns Phonogalerie, a business in the 9th arrondissement that sells antique record players.

This particular machine is topped with a large wooden horn that looks like the bell of a tuba. Aro, who speaks English fluently, loads a shellac disc onto a different machine, fitted with a shorter metal horn resembling a trumpet bell. This time the music sounds as though it is being played underwater. “The music is too loud for the size of the trumpet horn,” Aro says. He explains that it is a horn’s shape, not its material, that has a bearing on the acoustics. The ideal horn’s aperture is about 20 inches in diameter, and the barrel, or shaft, should be about 16 inches long. “Top-quality horns were made from mahogany because it was a hardwood, and it lasted longer. It didn’t affect the sound,” Aro says, adding that manufacturers used tin and brass for the cheaper models. Other horns were made from crystal and glass, he says, because those materials “looked nice.”

Phonogalerie, which Aro, a former Jean Paul Gaultier store manager, opened four years ago, usually has about 100 record players in stock. These include rarities from the late 19th century, mahogany-bodied mechanical and electric beauties from the early 20th century, and a few post-1950 examples that catch Aro’s fancy. Also among his inventory are about 6,000 antique discs and 2,000 cylinders. (Victrolas and most other antique machines play discs, while a minority, Edison’s included, play cylinders; the formats are not interchangeable.)

The record players’ prices start at a few hundred dollars and can exceed $50,000, particularly for models made between 1877—the year that Edison first introduced the Phonograph, as a dictation tool for office use—and 1897, when he and other entrepreneurs began producing their record players as home entertainment devices. (Phonograph, Gramophone, and Victrola were brand names for specific products. All can be described as antique record players, but Aro prefers to call his wares “talking machines.”)

Before he became a dealer, Aro was a collector, drawn to the devices by their designs, not by their engineering. “I just liked them. There was something about the shape,” says Aro, who acquired his first machine, a Gramophone, in 1991. (Although the seller assured him it was old, Aro later learned that most of its parts had been made in the late 1980s.) “I like the sound now, but that wasn’t the reason. It was aesthetic.”

Despite the nature of his initial attraction to the record players, Aro no longer thinks of them solely as objets d’art. In fact, no machine leaves his shop unless it can play music. “Once I had a customer say, ‘I don’t need it to be working. I want it to be without a motor,’? ” recalls Aro, who taught himself how to repair and restore the mechanical players but subcontracts work on the electric ones. “I refused, and he asked why. I said, ‘When you have people in your house, they will ask if they can play it, and you will have to say it doesn’t work.’ Just being decorative is not good. It should be decorative and functional.”