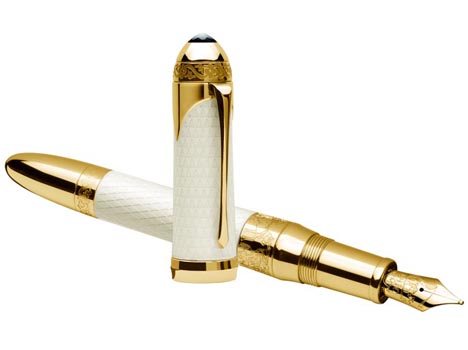 Montblanc is celebrating the legacy of German archaeologist Max von Oppenheim with its 2009 Patron of Art Edition, an annual limited-edition pen dedicated to a contemporary figure in the arts. Oppenheim, who discovered evidence of a prehistoric culture in Tell Halaf, Syria, is famous for helping to preserve and understand ancient civilizations. His most important discovery, Prince Kapara’s temple palace in Syria from the 9th or 10th century B.C. served as the inspiration for the pen design. The palace walls were adorned with huge animal sculptures and decorative reliefs that helped explain a previously unknown period, and some of these details have been reconstructed on the 18-karat gold pen. Gold-plated rings encircling the barrel and cap are decorated with reliefs inspired by the temple façade, and the geometric pattern on the pen is similar to that of the temple and of the prehistoric ceramics from Tell Halaf. Only 888 pieces will be created of the Oppenheim Patron of the Art Edition, $8,100, available in Montblanc boutiques in May. (www.montblanc.com)