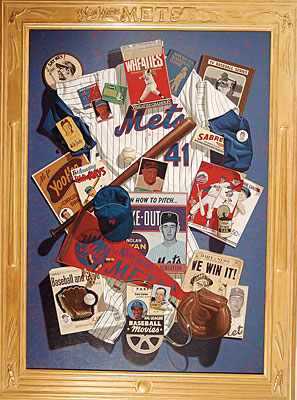 Three years ago, Larry Charles learned how well he had mastered trompe l’oeil when he brought one of his works to a frame shop near his hometown of Peoria, Ariz. The style of painting takes its name from the French phrase meaning “fool the eye,” and Charles’ Don’t Erase, an oil-on-canvas depicting a chalkboard, did just that: The framer hesitated to accept the job because he feared smudging the lettering on the board’s face. “He didn’t realize it wasn’t real chalk,” says Charles.

Don’t Erase, which Charles painted in 2002, adhered to the rules that have governed trompe l’oeil since the Greeks used the art form five millennia ago: The chalkboard is shown at its actual size, and it is flat. A trompe l’oeil artist will paint two-dimensional items because the renderings tend to appear more realistic than those of three-dimensional objects. Charles says you can judge an artist’s skill by conducting a simple test: “You should be able to take a real postage stamp, hold it next to a trompe l’oeil painting of a postage stamp, and not be able to tell the difference between the two.”

Like most trompe l’oeil artists, Charles gathers the items that he plans to depict, assembles them into a sort of collage, and then spends at least a day repositioning the pieces and adjusting the lighting. Once he settles on the ideal composition, Charles keeps the collage in sight while he paints so that he can continually refer to it. Gary Erbe, a Hoboken, N.J., artist, takes a less traditional approach. He places his collages behind his easel so that his paintings are not exact copies of them.

When Charles is trying to duplicate something as intricate as the engraving marks on a dollar bill, he uses a tiny brush with bristles that he likens to “a collection of eyelashes.” Although he might be tempted to do so, Charles does not employ a magnifying glass, because practitioners of trompe l’oeil pride themselves on relying on the naked eye, however inefficient that might be. “The amount that I can do in a year is very limited,” Charles says, noting that he paints about a dozen works annually. “Monet could paint a haystack in three hours, but it would take a trompe l’oeil artist a month to do something of the same size.”

Because the work is so time-consuming, it is impossible for a trompe l’oeil artist to produce the 60 or so pieces needed to supply a new one-man show every two or three years. In 2001, to remedy this situation, Charles and fellow artist Donald Clapper founded the Trompe l’Oeil Society of Artists, which musters enough paintings for group shows. Seven of its members contributed to Trompe l’Oeil: The Art of Illusion, a traveling exhibit that opened in February 2005. It will appear at the Lakeview Museum of Arts and Sciences in Peoria, Ill., through May 13, then move to the Philip and Muriel Berman Museum of Art in Collegeville, Pa. (June 3 through July 29), and conclude its run at the Mary Brogan Museum of Art and Science in Tallahassee, Fla. (August 24 through November 25). Some of the exhibit’s paintings will be available for purchase.

Those who visit the exhibit, or view any high-quality example of trompe l’oeil, might be surprised at how potent this ancient art form remains, even when compared with computer animation and other digital special effects. “I don’t think anything has changed as far as fooling the eye,” Weatherly, Pa., artist Michael Molnar says of viewers’ reactions to his paintings. “At first, they don’t know what it is. Then they always want to touch it.”