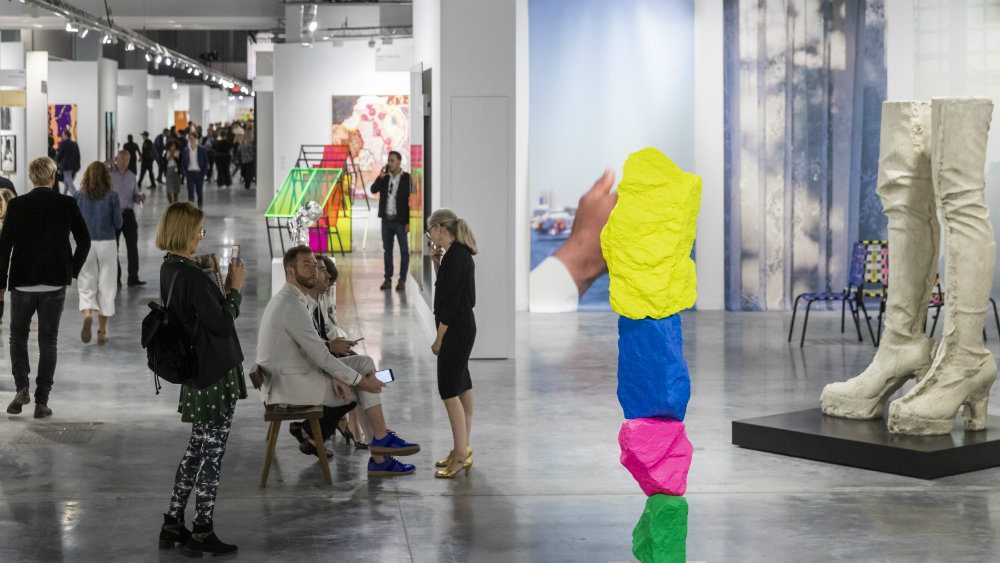 Fairgoers came and went during VIP preview of Art Basel Miami Beach and hardly noticed the biggest art object of all: the entirely renovated Miami Beach Convention Center where the art fair has taken place since its first foray in Florida in 2002. Once as woeful a slog as New York’s dreaded Javits Center, Miami Beach now feels like a clean, modern, airy facility, though the long-touted permanent art installations that were supposed to open this week are apparently on “Miami-time” and their postponing quietly went without mention.

Despite an impending U.S.-Chinese trade war and a nearly 800-point decline in the Dow Jones the day before, there were some big sales on during the first hours of Wednesday’s VIP preview, with at least one morning sale hitting eight figures: New York based Van de Weghe gallery sold Picasso’s Tête de Femme (1971), priced at $17 million.

Robb Report spotted Jeffrey Deitch in rapt conversation with a patrician couple in the booth of Helly Nahmad Gallery, which was offering  Mark Rothko’s Untitled (Yellow, Orange, Yellow, Light Orange) (1955). Priced at $50 million, the painting’s was owned for four decades by Paul and Rachel Mellon, before it was sold at auction for $36.6 million in 2014.

Over cocktails at a private event for the Metropolitan Museum of Art Wednesday night, Liz Klein, of the art advisory Reiss Klein, congratulated Noah Horowitz, Art Basel’s head of the Americans, on strong work on view at the the fair. “With so many art fairs, it’s always a wonder that dealers can find and hold back and parcel out such good material,” Klein said. “I really think galleries worked hard to find and hold back and present special work for this fair and that’s a big feat because there are just so many fairs and the fairs are a big part of the business.” Horowitz, naturally, concurred.

Indeed, there were a number of rarefy seen gems from the 20th century sprinkled throughout the fair. These included a Richard Diebenkorn still life at Van Doren Waxter that gallerist John Van Doren said had been in a private Californian collection of friends of the artist since the paint dried in 1956; Philip Guston’s Shoe Head (1976) which hasn’t been exhibited since the year it was made; and a beautiful, much-exhibited Robert Rauschenberg from 1978 on sale “directly from the estate,” according to staff of Galerie Thaddaeus Ropac, headquartered in Paris and Salzburg.

Elsewhere, we spotted Alice Neel portraits at David Zwirner and at London-based gallery Victoria Miro and a half dozen Milton Averys, also at Victoria Miro. Art advisor Todd Levin, seen walking clients through the fair, pointed to the Romare Beardens and the Jacob Lawrences at the booths of the New York–based DC Moore  and Michael Rosenfield galleries, as well as work by Doris Salcedo at White Cube, which Levin touted as among the best artwork in the building. “You often get a lot of works with a lot of bling, but it’s just work made for wall power for fairs, to draw our eye—it’s art fair art,” he said, “but not this year.”

Also sold within the first minutes of the fair were the colorful biomorphic table top ceramics by the Los Angeles-based artist/design team known as The Haas Brothers at Marianne Boesky Gallery, based in New York and Aspen. That’s not a shock considering the warm reception the artist duo—the fraternal twins Nikolai and Simon Haas—have been receiving since the opening earlier this week of their first solo museum show “Ferngully” at the Bass Museum here. Their exhibition showcases table-top sculpture like those shown by Boesky inside an imaginarium of hirsute, beaded, ceramic and velvet animals, monsters, mushrooms, trees, and biomorphic furniture.

Though they have enjoyed a long career that straddles design and fine art, the Bass exhibition seems to have catapulted the handsome brothers to rock-star status; they were seen in Boesky’s booth sporting colorful sport shirts—one in fanciful a floral, the other a print of retro-candies for the other—where they were recognized and asked to pose for photos.

The Parisian gallerist Daniel Templon is presenting a solo booth of sculptures and four large sculptural installations by the late American sculptor George Segal. Segal’s signature works are the life-size or almost life-size sculptures of men and women rendered in white plaster bandages caught in the everyday moments and the motion of modern life, recalling the preservations of Pompeii, plus a few thousand years. (Segal used a layered molding technique by plastering the bandages directly onto the model’s body.)

But Templon’s presentation includes late work from the artist, who died in 2000 with four installations here (The Dumpster, 1994; Guinness Gold, 1995; Bus Passengers, 1997; 42nd Street Deli, 1999), in which Segal plays with color and background: figures are rendered in bright blue or black and installed (following archival photos, according to the blue eyed Monsieur Templon) against wall-panels the include photographic imagery and a select use of every day objects. Most arresting is 42nd Street Deli (1999), in which a cobalt-colored man stands against a lit-from-behind night-time cityscape, complete with stars, skyscrapers, and a sign for what can only be a New York City deli.

In the Positions section of the fair, which is for solo presentations of artists (often up and comers, often from younger galleries), the New York-based Thierry Goldberg Gallery devotes its booth to work by Tschabalala Self (also represented in the main section of the fair by London-based gallerist Pilar Corrias alongside art stars like Alice Neel and Rirkrit Tiravanija). Self, born in Harlem, New York, and based in New Haven, Connecticut, recently completed the inaugural three-month Red Bull’s art residency in Detroit. Given her stomping grounds, it’s not surprising that one of her main preoccupations is wholly urban: the bodega, and its role in the day-to-day life of the urban poor.

The work in Goldberg’s booth is based on Self’s personal interactions with the bodega as a socio-political space of exchange. In her work here, paper and canvas covers the booth, from the ceiling to the black-and-white checkered floor, which is strewn with plastic packing crates. In the corner is the ubiquitous convex mirror that helps shop-owners everywhere keep their eye on potential shoplifters and other trouble makers.

This booth’s presentation relates to Self’s works on view in a show of new acquisitions that opened early this week at the Rubell Family Collection. At the Rubell are paintings where Self carefully depicts in broad, loose color the goods for sale in bodegas, including off-brand, chemical laden cleaning products that she has memorialized her in portraiture. (Much father afield, Self has a multi-media solo exhibition entitled “Bodega Run” on view at the Yuz Museum, West Bund Shanghai through December 9.)