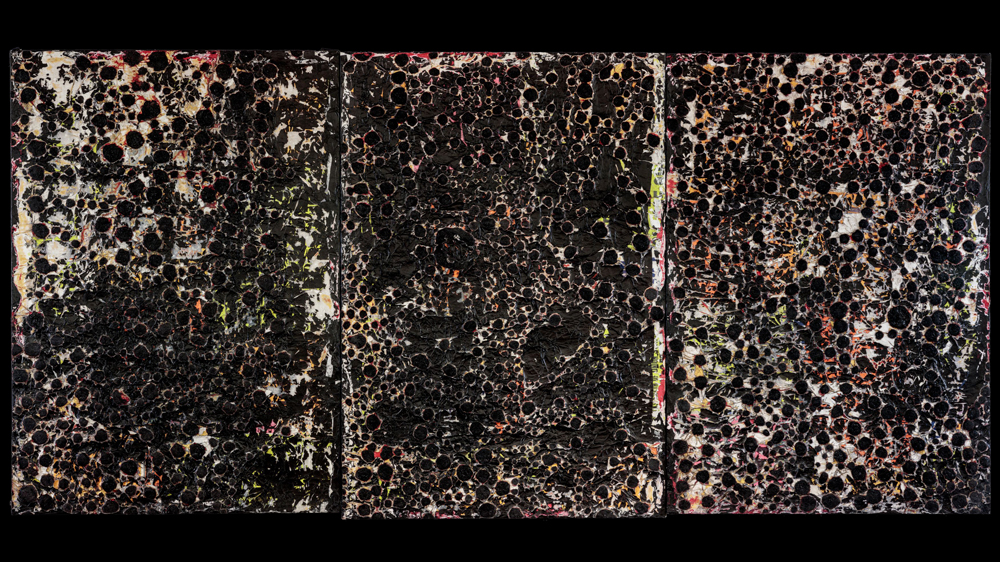 The Miami Beach Convention Center venue is still undergoing a massive renovation—and with it, a complete rearrangement of the 268 participating galleries, giving even seasoned visitors a lost-in-translation feeling. Even with that initial obstacle, steady commerce was instantly at play.

“For us,” said Marc Payot, a partner at gallery giant Hauser & Wirth, “this is the strongest fair for us by far. The fair has a level of maturity that allows us to bring really major pieces and place them in great contexts.”

The gallery sold a major sculptural work by Bruce Nauman titled Untitled (Two Wolves, two Deers) (1989), executed in polyurethane foam, glue, and steel wire, with the carcasses hung like slowly spinning trophies in a hunter’s den. It sold for $9.5 million to an Asian client, according to Payot. Hauser & Wirth also sold Los Angeles superstar Mark Bradford’s magisterial composition Moon Rocks (2017), a mixed media on canvas composed of three panels measuring 100 by 210 inches. It sold to a European collector for $5 million.

Other sales completed within the first few hours of the fair included Jack Whitten’s large-scale abstraction Barney’s Legacy II (1980), composed of acrylic and paint collage on canvas. It sold for $950,000, a new price level for the artist, according to Payot. The title of the 78½-by-107-inch work refers to the abstract expressionist master Barnett Newman and includes striking geometric shapes in red, blue, and yellow positioned across the massive canvas.

Hauser & Wirth also sold Achrome (circa 1959), an important work by Piero Manzoni, the Italian avant-garde legend, executed in stitched canvas and kaolin. The all-over white composition is divided into perfectly formed squares and stands as a brilliant precursor to the minimal art movement. The gallery declined to state the price, though it certainly hit the eight-figure mark.

London’s Alison Jacques Gallery also registered early sales with two important sculptures by the late American artist Hannah Wilke: Untitled (1975-79), composed of 60 glazed and painted ceramic forms on a painted wood board, which sold for $550,000, and Wilke’s wall-mounted abstraction Mellow Yellow (1975) in latex and snaps, sold to another private collector for $750,000. Jacques also sold the late American surrealist artist Dorothea Tanning’s watercolor and graphite work on paper, Around Town (1986), for $50,000.

“Art Basel Miami Beach is the most important American art fair, and you have to do a museum-level presentation,” said gallerist Alison Jacques. “It is Basel,” she continued, referring to the older and more established fair in Switzerland, “but it’s Basel in America.”

That positive feeling was also voiced by seasoned collector Ron Pizzuti from Columbus, Ohio, who said, “This is growing into a very good fair, and I wouldn’t have said that 10 years ago.” When asked if he bought anything, Pizzuti responded, “I’m not aggressively looking, but I can count on one hand the number of art fairs I’ve gone to where I haven’t bought anything.”

Other early sales include a stunning Sigmar Polke double-sided painting, Transparent #8 (1988). It’s set in an acrylic artificial lacquer on polyester fabric and an artist-made wood frame. It sold at New York/London Michael Werner Gallery for $1.75 million to an American collector, according to gallery partner Gordon VeneKlasen. Another early sale includes a large-scale figurative work by the Japanese artist Nara, Young Mother (2012); it sold at Pace Gallery for $3 million, according to gallery president Marc Glimcher.

Glimcher seemed even more excited with the sale of newbie gallery artist Loie Hollowell and her color-saturated abstraction Full Fontal (blue, purple and red) (2017), which went for $65,000. Pace also had a display of sculptural maquettes by art-world titans Alexander Calder, Jean Dubuffet, and Tony Smith, with options to commission the full-blown version, such as Dubuffet’s Theatre of Trees (1974). Standing at 28 by 40 feet, it can be yours for $12 million.

In one of the major sales of the fair, New York’s Paul Kasmin Gallery sold abstract expressionist painter Lee Krasner’s standout and shimmering Sun Woman I (1957) for $7 million. The price exceeded the artist’s auction record set by Shattered Light (1954), which sold at Christie’s New York this past November for $5.4 million.

With much to see and do, Art Basel Miami Beach and its attendant fairs continue through Sunday, December 10. For those needing a respite from the frenzied activity, Robb Report recommends a host of spas and resorts to refresh your state of mind.