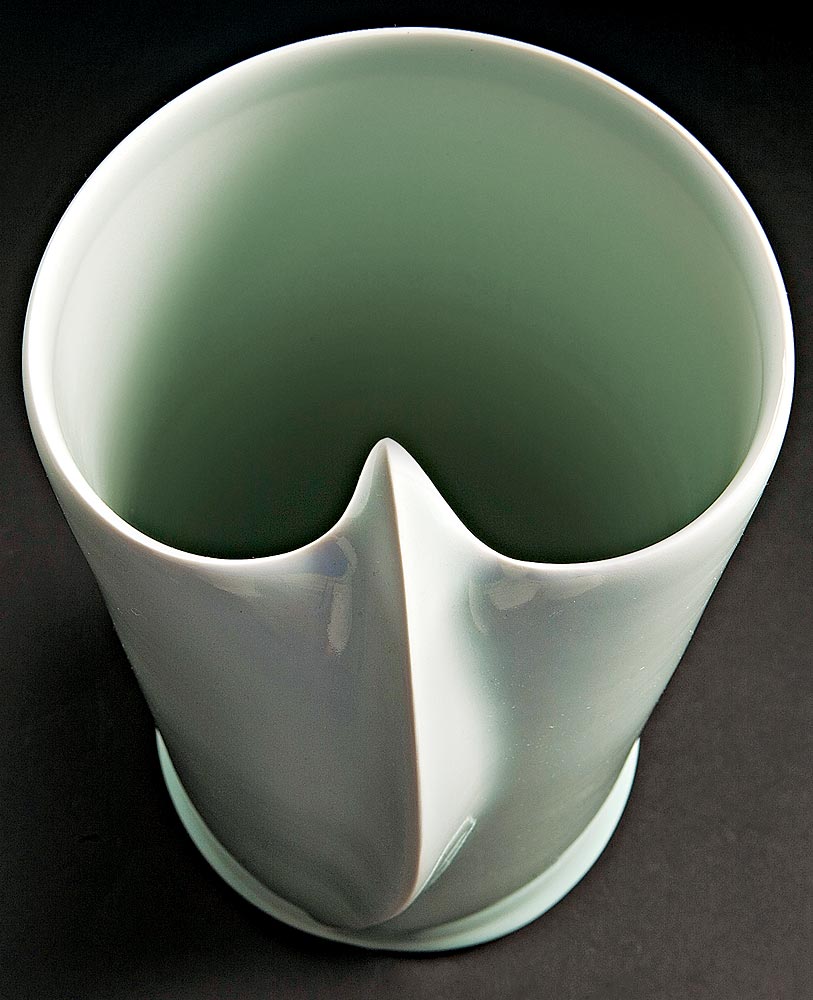 “All Japanese art is a niche,” says Erik Thomsen, a New York gallery owner and dealer in Japanese art, “but Fukami is a very well-known artist, and he is easy to sell.”

Well known, indeed: Sueharu Fukami, a native of Kyoto, has his works in more museum collections around the world—including the Metropolitan Museum of Art—than any other living ceramist. His abstract porcelain sculptures, treated with a traditional pale bluish-green glaze called seihakuji and often mounted on wooden bases, are instantly recognizable for their dramatic sweep, sharp lines and edges, and luminous formal purity. These giveaways are ironic, as they embody the artist’s own desire to leave the least amount of evidence that his hands ever touched the clay.

Fukami, born in 1947 as the youngest of six children, grew up in an area of Kyoto known for its pottery workshops; his family operated one of nearly 100 small kilns in the area. He studied ceramics in school, and his determination to become a ceramist himself was hardened when, at 20, he won a spot in Nitten (the Japan Fine Arts Exhibition), one of the country’s most famous art competitions.

In 1980, inspired by his brother’s use of slip casting for the mass production of household porcelain wares, Fukami began to develop his signature technique of high-pressure slip casting, a complicated method he employs to create the unique shapes of his sculptures. First he makes a mold, from which he creates a plaster cast. He then fills the cast with slip (a liquid mixture of clay and water), using pressurized air to distribute the material evenly throughout the cast. The filled cast is left for about three hours while the plaster absorbs the water from the outer layer of slip. When the remaining liquid is poured off, the plaster cast is left to dry for three hours and then removed. The result is a soft, hollow clay body about a half-inch thick. That body is dried for more than two weeks, and then Fukami carves and sands every edge. Next, the sharpened body is bisque-fired before being airbrushed with seihakuji and fired a final time, for about 24 hours.

Five years after devoting himself to high-pressure slip casting, Fukami experienced his international debut at the Premio Faenza International Competition of Contemporary Ceramic Art in Faenza, Italy, where he won the grand prize. Since that stellar introduction, his stature has continued to increase, resulting in numerous exhibitions, including a significant solo show in Faenza that marked the 20th anniversary of his grand-prize victory.

Fukami’s latest exhibition will take place September 18 to November 21 at Thomsen’s new gallery space on East 74th Street in Manhattan. The show will feature about 30 pieces, some up to 6 feet tall, ranging in price from $2,000 to $70,000. Thomsen has a familial tie to Fukami—his brother is married to Fukami’s niece—but even with that connection, he says, it is difficult to meet the demand for Fukami’s work. The artist’s laborious process and meticulous work mean that pieces take a long time to complete.

It is worth the wait, though, Thomsen says: “His clean lines are a continuation of the Japanese aesthetic in the classic Japanese art, but he is doing something brand-new.”