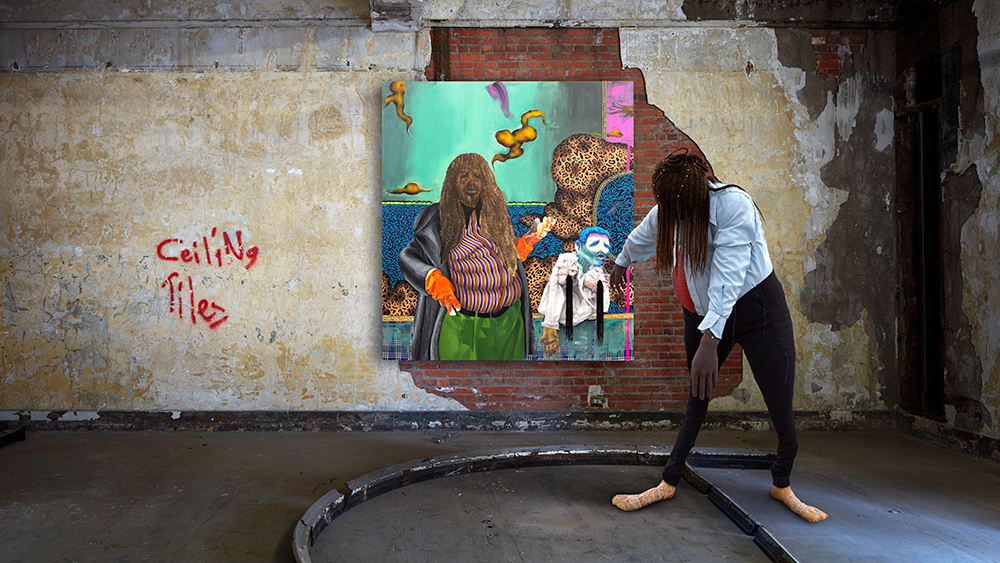 Courtesy of the artist, Library Street Collective, and Nicodim Gallery. Image and rendering by James Haefner

When the Covid-19 pandemic forced the nation’s galleries to close their doors, art dealers scrambled to digitize their exhibitions and begin selling artworks online. Seven weeks in, the question is: Are their efforts panning out?

Unlike in past crises—9/11, the 2008 global economic meltdown—the determining factor now is not so much the size of the gallery but its digital nimbleness. Those who were already starting to crack the e-commerce code before the pandemic are well ahead. Others are playing a stressful game of catch-up, or even doing the once unthinkable—partnering with Sotheby’s. Still, while sales have fallen dramatically almost everywhere, gallerists insist they’re not mounting fire sales of inventory or entertaining lowball offers, so collectors hoping to pick up a bargain Richter needn’t waste their time.

David Zwirner, with spaces in New York, London, Paris and Hong Kong, launched an online exhibition program back in 2017, giving it a head start in figuring out what plays and what doesn’t, according to its namesake founder. “Art wants physical space, so it’s kind of antagonistic [to the Web] from the get-go,” Zwirner said. “You have to create an experience that works.”

Recognizing that galleries are not only marketplaces but “free culture,” Zwirner started a podcast series in 2018. He quickly learned to add contextual elements to his website, such as the short travel-and-art montage video now on the Marcel Dzama page (featuring the artist’s mask-wearing son) and a time-lapse video of Dzama painting a watercolor. What’s key, in Zwirner’s view, is artists’ creative involvement. “Artists have to take this space and run with it,” he said.

Traffic to the site has been up 500 percent during the shutdown, and 43 percent of the sales through Zwirner Online have been to first-time clients, according to the gallery. (No, there’s not a “click-to-buy button.” Buyers still have to pass muster.) And while gallery revenue is down—he said his gut told him by half—transactions are actually up more than 10 percent. Zwirner has even had success putting consignments online, in an invitation-only forum called Exceptional Works, where a 1959 Josef Albers canvas sold for $1.8 million. “We launched it in the morning and sold it in the afternoon,” Zwirner said, adding that, unlike a gallery’s brick-and-mortar private viewing room, the shared digital version created the very motivating perception of competition.

Zwirner has also used his digital savvy to aid smaller galleries. This spring, he launched an extension of his site called Platforms, which established web pages for dozens of galleries that lack the resources to make their own digital push in tough times. Each of these independent galleries in New York, Los Angeles and London features one artist from its roster, then handles collector inquiries itself—and reaps 100 percent of the sales with its artist. Zwirner said that in addition to helping those galleries survive, the project has been “great for the morale of my operation.”

Hauser & Wirth also has experience online and knows how to lean into what digital does well—using video, interviews and personal touches such as artists’ booklists, playlists and even Rashid Johnson’s recipe for baby back ribs—to tell a bigger story than one would find on a gallery’s white walls. “The idea is to communicate not just with actual works,” said Marc Payot, president of the gallery, adding that web’s immediacy is another important consideration. “We have encouraged artists to present something that connects to the current moment.”

Two cases in point: Johnson’s online exhibition, Untitled Anxious Red Drawings, and George Condo’s Drawings for Distanced Figures, both of which featured works made during the pandemic. Payot said the shows, with prices up to $150,000, quickly sold out. Pre-crisis, online shows triggered less than 1 percent of the gallery’s sales but are now up to about 20 percent, he noted. Overall, though, he said primary market sales fallen roughly by half. 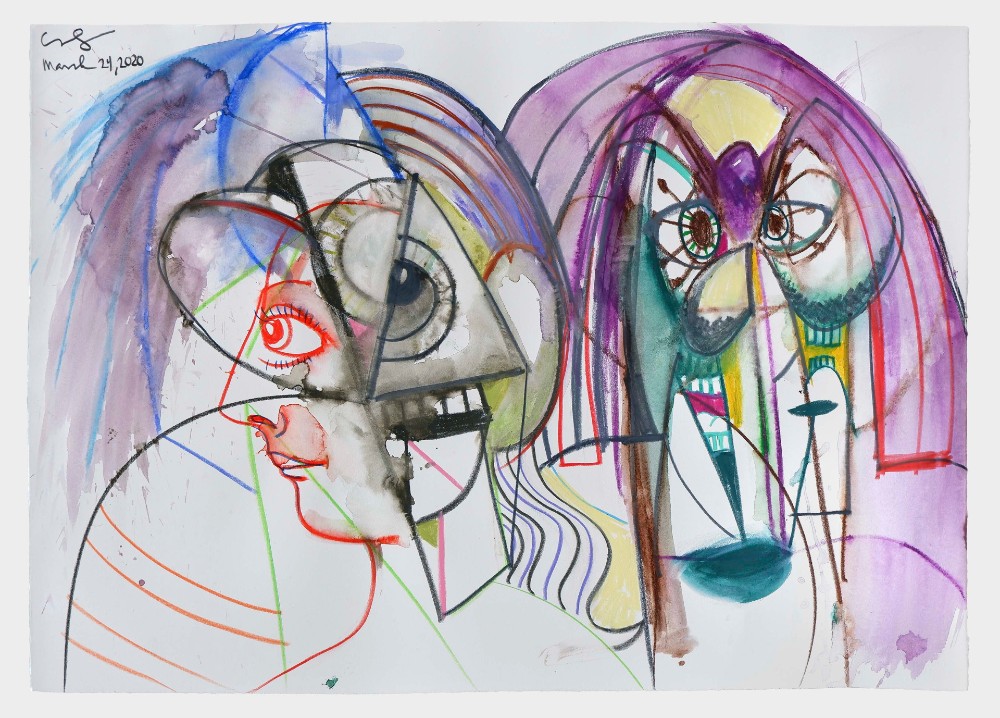 About 18 months ago, Hauser & Wirth began developing a virtual-reality program, which Payot described as a cross “between a computer game and an architectural tool,” largely as an eco-friendly effort to cut down on travel by giving artists a 3-D view of the gallery’s exhibition spaces dotted around the United States, Europe and Asia. The Covid-19 crisis prompted the gallery to accelerate its timetable. Last week, the project launched with an exhibition of works by Mark Bradford and Ellen Gallagher, among others, in its upcoming space on Menorca. It’s now viewable with a regular device or a VR headset.

It’s an innovation that Payot expects will outlast the pandemic. “For us what is attractive is the notion of access—the idea that a student in Asia can experience an exhibition much closer to reality than just images on a screen,” he said.

But it’s not just the behemoth multinational galleries demonstrating strength. Sales at Detroit’s Library Street Collective are actually up during this period, partly an indirect byproduct of the gallery’s philanthropic efforts, cofounder Anthony Curis said. Library Street collaborated with 29 artists to produce a coloring book, titled We All Rise, that benefits food and arts programs for local children during the crisis. Curis attributed the boost in sales to both reflective good will and a massive traffic spike to the site to buy the book. “We’re actually busier now than we’ve ever been,” Curis said, sounding a bit embarrassed, considering the painful climate.

But Library Street, where the bulk of sales are between $15,000 and $50,000, was already well-positioned digitally. Because Detroit is off the beaten path in the contemporary art world, it had already taken steps to build a bigger collector base online. About 15 months ago, the gallery began to develop Site, which digitally places artworks in architecturally significant but empty local buildings to dramatic effect. The program kicked off May 1 with an exhibition set in State Savings Bank. 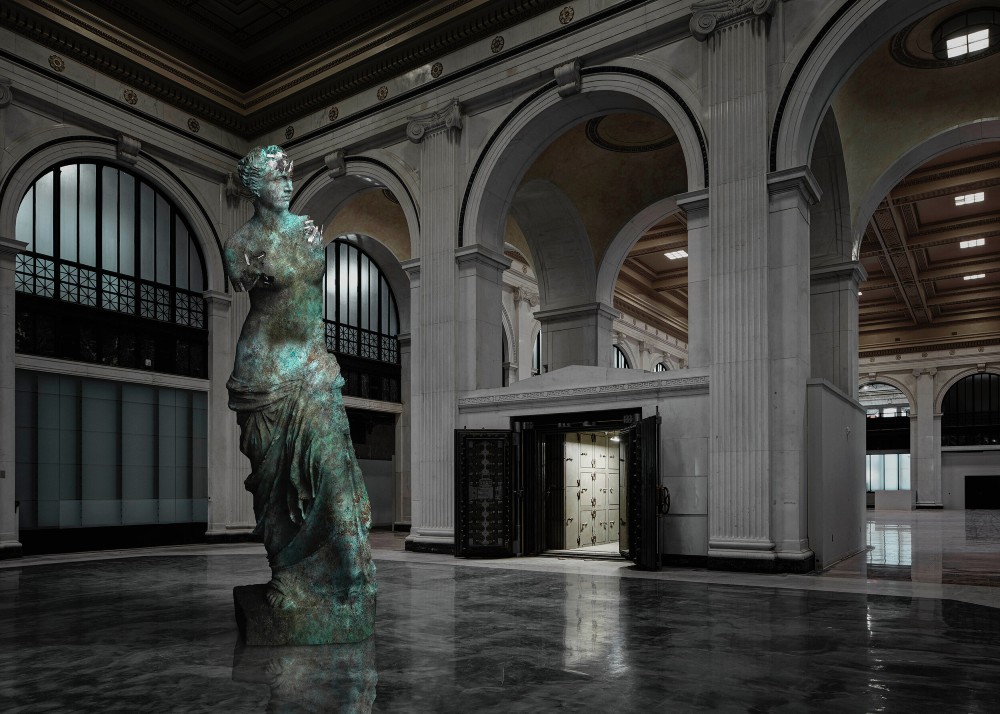 While other galleries, including Lehmann Maupin, are ramping up VR plans, overcoming the two-dimensionality and other constraints of the web has proved more difficult for some.

“The first couple of weeks, while dealing with the existential panic of, ‘Will we survive?,’ we felt very stupid for not having developed virtual viewing rooms,” said Sean Kelly, whose eponymous gallery in Chelsea represents Marina Abramović and Kehinde Wiley, among others. But now, he’s unconvinced digital is the answer. “People with disposable income are the least equipped to deal with this technology. If you’re trying to sell a $50,000 object to a 12-year-old, great. A 72-year-old? Forget it.”

Kelly estimated sales are down 35 percent. The sweet spot for the primary market is $50,000 to $200,000, he said, but his gallery is also taking in up to seven figures on some transactions. “The rich are still rich,” he added.

While business has slowed drastically at Lévy Gorvy, to about one sale a week, cofounder Dominique Lévy said seasoned collectors are taking the opportunity to snatch up works they’ve long coveted, and the gallery has sold two works for more than $5 million each during the temporary shutdown.

But Lévy, who operates spaces on the Upper East Side and in London, Hong Kong and Zurich, remains unconvinced that digital will be able to pick up the slack for most galleries during this crisis. Art websites, she said, just don’t compare to the sophisticated VR experience of, say, a recent invitation-only Fortnite event with a Travis Scott performance. Even with some success selling works on the gallery’s online viewing rooms—enhanced with video and music—Lévy said, “you need to see it [in person]. You need to feel it.”

Nevertheless, Lévy, like the other gallerists interviewed, remains bullish and insists that when galleries reopen they will provide much-needed refuges, where people “can look at books and art, have a Cognac and a conversation eight feet apart.”

“Being engaged with art,” she said, “has survived every epoch, every war, every pandemic.”