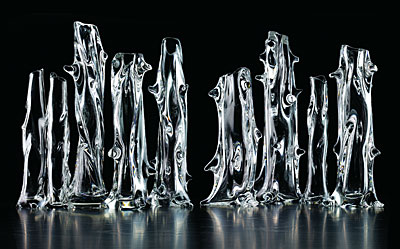 Steuben Glass is renowned for the clear, brilliant, and flawless lead crystal that its glassmakers shape into vases, stemware, and decorative objects. Artist Jeff Zimmerman is not so finicky. The glass in his works—which include opaque trumpetlike forms that would befit a Dr. Seuss illustration and chandeliers that resemble dangling bouquets—often is marked by striations and bubbles. But he compares these imperfections to freckles and birthmarks, saying that they add character to his pieces. Nevertheless, the 38-year-old Brooklynite and the 104-year-old Corning, N.Y., company have collaborated on Soft Explosion, a new lead crystal collection that the artist designed for Steuben. Ranging in price from $2,000 to $21,000, the pieces in the collection include the Splish and Splash bowls, each of which resembles a droplet of water striking a surface; a variety of Trees, upright lengths of twisting crystal with protrusions that resemble the nubs of failed branches; and Spiny Orbs, which look like, well, spiny orbs.

“It is really unusual and exciting for us,” Steuben president Marie McKee says of the collection. “When people see [the pieces] they say, ‘Wow, I’ve never seen anything like that—it’s pretty cool.’ ” McKee herself had a similar reaction when she first saw an example of Zimmerman’s work, a mirrored orb that a Steuben employee brought to a staff meeting more than two and a half years ago. “I thought, wow, what an exciting work,” says McKee, noting how that encounter ultimately led to the partnership with Zimmerman.

Steuben has collaborated with artists in the past. After its researchers perfected a technique for making lead crystal in 1932, the company began inviting artists to experiment with the material; a 1940 exhibit in its New York store included pieces by Georgia O’Keeffe, Henri Matisse, and Salvador Dali. For Zimmerman, working with Steuben and its lead crystal represented an opportunity to try his hand in a novel medium, though one closely related to the glass with which he usually works. “It really is like an artist who is used to bronze being invited to a gold-casting foundry,” he says. “It was a challenge to take that material, which is used very traditionally, and use it in a more organic, contemporary way. I knew the potential it could have.”

Two of the more enchanting Soft Explosion pieces are the Splish and Splash bowls, which call to mind Harold Edgerton’s 1957 stop-motion photograph of a falling milk drop arrested in the instant that it bursts into a crownlike shape. Zimmerman says he was not thinking of the late Massachusetts Institute of Technology professor’s work when he sketched the prototypes, but he points out that the similarities are more than visual. Both the photograph and the bowls, he says, manipulate a fleeting interaction of liquid and gravity to create something lasting and beautiful: Edgerton took his photo at precisely the right moment to capture a phenomenon that happens too quickly for the eye to see, and Zimmerman’s designs require Steuben’s artisans to rotate the unfinished glass bowls rapidly so that the stubby points around their rims reach the proper length before they cool and set. (The glassmakers produce the Splash bowl’s downturned rim by holding the hot glass at a 45-degree angle while spinning it.)

The latter task is more strenuous than pressing a shutter button but equally dependent on split-second timing. “You’re trying to control a lot of different things that are happening at once. You want [the rim] to stretch, but you don’t want it to stretch too far,” says Jeff Babcock, a master glassmaker who has been with Steuben for 34 years. “Lead crystal has a lot of movement to it, and it’s easy to go beyond where you want to be. The trick is to control the movement. You use a lot of subtle control to achieve what you’re after.”

Babcock says that working with Zimmerman provides a respite from the rigors of making the company’s more mainstream products. “Steuben tends to be pretty traditional, but his style is much more free-form,” says Babcock. “A lot of his pieces are one-of-a-kind, and each piece has its own feel and flavor. It’s a bit different from what we’re used to.”

Zimmerman says he enjoyed working with lead crystal, even though it lacks the flaws of the glassworks he creates in his studio. “There’s so much going on visually [in the Soft Explosion pieces] that it doesn’t need them,” he says. “It works with it being pure.”