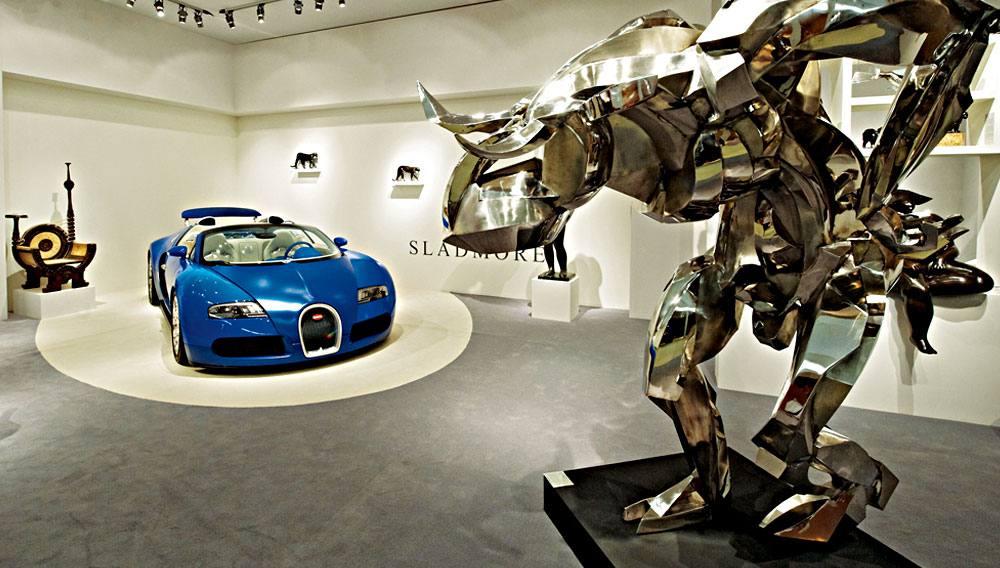 When the Grosvenor House Art & Antiques Fair—the leading British show of its kind—abruptly folded in 2009 after 75 years, speculation began almost instantly about what might fill the void. Would one of the competing fairs held in London in June lure its audience, or would something new emerge in its place?

To the surprise of much of the art world, the answer is already clear: Masterpiece London, an event that debuted in 2010 with celebrity-graced previews and an innovative mix of offerings, exceeded expectations and claimed the mantle of London’s premier event for serious collectors. The brainchild of Thomas Woodham-Smith, the former managing director of antiques dealer Mallett, and other like-minded dealers, Masterpiece aims to deliver what Woodham-Smith deems “the best of everything,” showcasing art and antiques alongside classic cars, jewelry, wine, and more.

Last year, the stand of London’s Sladmore Gallery exemplified the fair’s spirit by displaying a Carlo Bugatti chair, a Rembrandt Bugatti panther sculpture, and a Bugatti Veyron automobile, which was accompanied by an authorized Bugatti dealer who fielded questions and arranged test-drives. Edward Horswell, director of Sladmore, says he sold the chair and the sculpture, and he notes in passing that the panther cost more than the Veyron would have.

Masterpiece might be the first art and antiques fair to include cars in its lineup. While the Veyron did not sell at the fair, other cars did. Fiskens, a London-based specialist in historic automobiles, sold a vintage 1927 Bentley—known as “The Fast Lady” for its appearance in the British 1960s film of the same name—for a six-figure sum.

Masterpiece drew inspiration from The European Fine Art Fair (TEFAF), the king among art and antiques fairs, held annually in Maastricht, the Netherlands, and recruited Harry van der Hoorn, of Stabilo, the company that builds the stands at TEFAF, as a founding partner. Masterpiece cofounder Harry Apter, director of Apter-Fredericks, recalls a “brainstorming session” at Mallett around December 2007 with a few other dealers who felt that London needed a fresh attraction. Talk ultimately tilted in favor of a fair. “Grosvenor House had lost cachet,” Apter says. “We had worked for 18 months when it closed.”

The rival fairs—the Olympia International Fine Art & Antiques Fair (formerly the London Inter­national Fine Art Fair) and Art Antiques London—will also return this year. Olympia International will take place June 9 to 19, and Art Antiques London will be held June 9 to 15. Masterpiece London 2011 will take place June 30 to July 5, slightly later than last year, with a preview on June 29. It will move to a larger London location, the South Grounds of the Royal Hospital Chelsea, which will accommodate 151 booths, 34 more than in 2010. New exhibitors include Rolls-Royce, Marlborough Fine Art, and JAR Parfums, a Parisian jeweler and perfumer paradoxically famous for its exclusivity.

Though he won big last year with Masterpiece, Woodham-Smith found the victory incomplete: He had craved a showdown. “We were planning to mount the first fair in the teeth of Grosvenor House,” Woodham-Smith says. “We didn’t expect it to fold.”