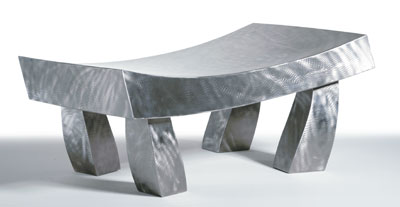 Bending and welding metal into a chair that is as compelling to look at as it is comfortable to sit on is a relatively straightforward process, in Paul Freundt’s opinion, if you understand human physiology. “All you’ve got to do is support the ischium bones,” says the 55-year-old metal sculptor, illustrating his point by grasping a pen, drawing a human pelvis, and indicating an area below the hip socket. “The whole body sits on those bones. You only need the width of the seat to support them. They’re seven or eight inches apart; it doesn’t take much.” Freundt has worked with metal for more than 30 years and has made furniture with it for the last 14, but his medical illustration skills—which he once planned to practice professionally—continue to serve him.

Freundt changed course and began sculpting metal while studying art at the University of Georgia in the 1970s, and he started focusing on creating metal furniture in 1990, after showing his first metal chair, an untitled piece, at an Atlanta gallery. “As soon as I finished it, everyone was attracted to it,” says Freundt, who priced the chair at $3,000. “I sold it off the bat.” Today, his furnishings can fetch as much as $14,000, and commissions can cost more. Although Freundt makes most of his furnishings of metal entirely and renders many in stainless steel, aluminum, or bronze, they do not appear cold or industrial, in part because they include few right angles. The lines are soft, almost sensual. From certain perspectives, some pieces appear as if they might fall apart at a touch. “A piece can be serviceable as a chair but not dynamic as a design,” says Freundt. “If it looks dynamic, is an original design, and functions successfully—if you’ve got that, you’ve got a masterpiece.”

The warm reception accorded to his furniture enabled Freundt, a lifelong resident of Georgia (excluding the summer when he studied in Italy during college), to leave Atlanta 11 years ago for a forested parcel in the town of Talking Rock in the Georgia mountains. He lives there with his wife, three children, and seven dogs, including a black dachshund named Pepe who is almost too plump for his own legs. In his 2,400-square-foot workshop, which is just steps from his house, Freundt toils at his discretion, making as many as 40 pieces a year or as few as 15. “Like anybody else at my age, I enjoy other things,” says Freundt. “I love gardening.”

However, his affection for furniture-making appears to be equally strong, because he spends much of his time in his workshop or considering what he is going to create there. A three-legged bronze chair that he has dubbed Scythia emerged from thinking about a specific form. “I was fascinated by the shape of an ax, and I wanted to make it into the back of a chair,” he says. “I repeat the shape in the outline of the seat.”

Freundt can mull over ideas for years before using them in his art. Viewing an authentic stone corn-grinding table in a 1997 exhibit of South and Central American artifacts at the Mint Museum in Charlotte, N.C., led him to make the Azteca bench six years later. The ends of the bench are uneven by design; one is 18 inches off the ground, the other 16, and its center dips to 14 inches to mimic the slope of a corn-grinding table. Although the bench, like all of his other furnishings, lacks upholstery, it is intended to be as functional as it is ornamental. “The thing I hear most often from people who come [to shows where he exhibits his furnishings] is that they are surprised at how comfortable it is,” says Freundt. “You don’t always think of metal being used for a chair.”