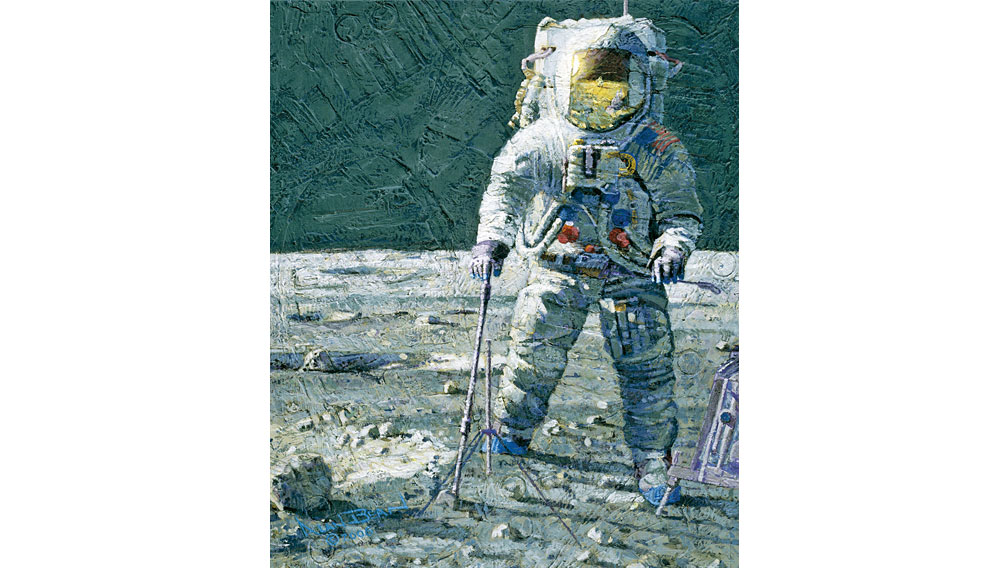 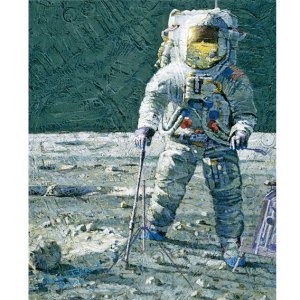 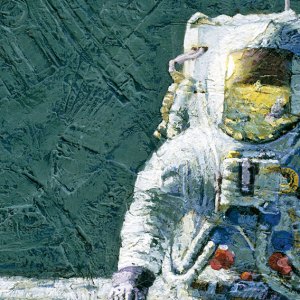 Nothing on the surface of the moon is violet or orange or pink or blue.

Alan Bean knows better than anyone that everything on the moon appears gray. He’s been there; during the Apollo 12 mission in November 1969, Bean became the fourth person to set foot on the moon. Nevertheless, he uses colors to depict the lunar landscape, and this choice suggests how much he has grown as an artist over the last three decades.

Bean, who became an astronaut 50 years ago, began painting full time in 1981 after resigning from NASA, an agency that places the highest priority on precision. His earliest moonscapes reflect a devotion to realism—they are mostly black, white, and gray. The American flag’s red and blue and the blue-green sphere of Earth in the background provide the only touches of color. It took time for Bean to fully absorb what he had learned during a side trip to Rouen, France, in the mid-1970s.

He visited France on his way home from Moscow where he had been training to serve as the commander of the U.S. backup crew for the Apollo-Soyuz Test Project, which took place in July 1975 and became the first joint U.S.-Soviet space flight. Two years earlier, in July 1973, Bean had made his second (and final) flight into space, on a mission to the Skylab III space station.

Bean arranged the detour to France so that he could stand at the spot where Monet stood while painting his cathedral series in the early 1890s. Monet’s works depict the building’s western facade in reds, blues, golds, and other colors. The color schemes reflect different weather conditions, times of day, and seasons of the year. Bean thought that by standing in the right place at the right time, he would see the hues and shades of Monet’s paintings. “What did I see as the sun came up?” he asks. “A gray granite cathedral. I didn’t see any of the colors that are on these paintings.” Instead, he saw that Monet had added the colors, that he did not transcribe the scenes—a revelation that was both liberating and intimidating. “It’s just me here,” Bean, now 81, says of his own art. “I decide if the crater with blues and purples is beautiful.”

To his delight, many agree that the moon’s craters are indeed beautiful rendered in blues and purples. Bean prices his commissions at $210 per square inch and has a 2-year waiting list. His paintings have commanded more than $225,000. Bean welcomes the money, but it is not the reason he paints. “My goal from day one,” he says, “has been to paint the great adventure of humankind as accurately as can be done—not because I’m a great artist, but because time passes.” He is alluding to his status as one of only eight people alive who have walked on the moon. NASA has no plans for future crewed moon landings, so that number will only dwindle. Though Bean may feel an urgency to depict the lunar experience, his meticulous nature limits his output to no more than seven works a year.

Massachusetts-based Lawrence McGlynn, a collector of space memorabilia and space-related artwork, treasures his 2003 Bean painting John Young in the Mountains of the Moon. Bean textured the painting’s surface with marks from the hammer he wielded on the moon, a replica of a boot he wore there, and tiny pieces of his Apollo 12 name patch, mission patch, and other keepsakes that are laden with moon dust. “That’s a reason why I liked that painting,” McGlynn says: “It had something from the moon in it.” He quickly notes that the moon dust is only one of many reasons why he values the painting. “Other space painters don’t paint what they know; they paint what they think.Alan went to the moon and brought that back. He’s one of the later descendants of the Hudson River School of exploratory painters.”

Bean is humble about his talents. Imagining how Monet might regard his paintings, he says, “Monet could do this better. He could make it more beautiful than I do. But he would like that I try to do this.”