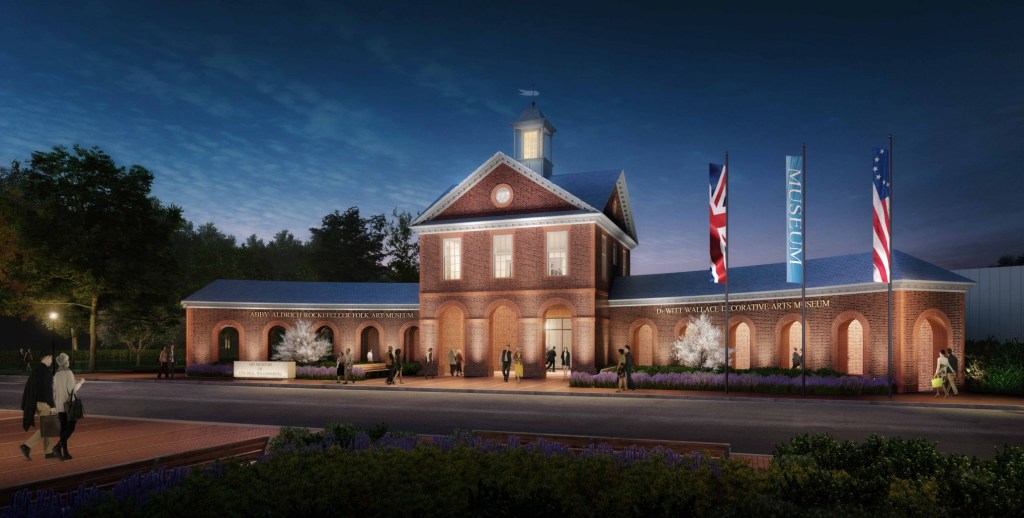 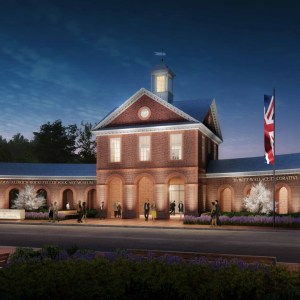 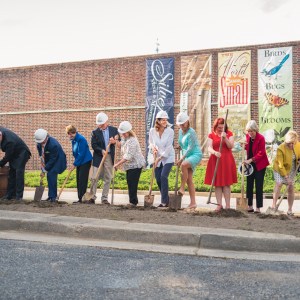 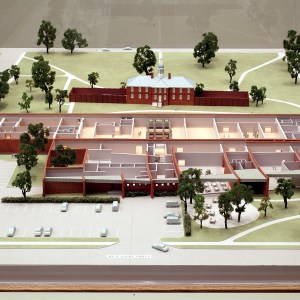 Nearly two and a half years after announcing the public phase of a $40 million capital campaign with its goal met, the Art Museums of Colonial Williamsburg held a groundbreaking ceremony this afternoon, on the site where construction is set to begin on the first large-scale expansion and upgrade to its building. The project, the primary capital priority of the Colonial Williamsburg Foundation’s $600 million Campaign for History and Citizenship, will significantly enhance the home of the Abby Aldrich Rockefeller Folk Art Museum, currently celebrating its 60th anniversary year, and the DeWitt Wallace Decorative Arts Museum.

Mitchell B. Reiss, president and CEO of the Colonial Williamsburg Foundation, welcomed guests including Art Museums Board members, CWF Trustees, major donors to the Art Museums, as well as several state and local officials.  Henry C. Wolf, chairman of the CWF Board of Trustees and vice chairman and CFO-retired of Norfolk Southern Corporation in Norfolk, Virginia, and Sheila Miller, chair of the Art Museums Board, made brief remarks, as did Ronald L. Hurst, Colonial Williamsburg’s Carlisle H. Humelsine chief curator and vice president for collections, conservation and museums who also served as the master of ceremonies for the groundbreaking.

“The Art Museums’ expansion is a fundamental component of our core mission,” Wolf said. “It is being completely funded with dedicated donor funds and not with the Foundation general endowment.”

“The Art Museums of Colonial Williamsburg are treasured institutions in which guests experience both the world’s premier collection of American folk art and our nation’s early decorative culture,” said Reiss. “The critical work that begins today, made possible wholly due to our supporters’ foresight and generosity, will allow us to improve the visitor experience, draw more visitors, and more appropriately display our world-class collection.”

“For so many, Colonial Williamsburg is a treasure because of its people and its places, and rightly so. It is in its collections, however, that we see and hear the stories of individuals who, against long odds, created a nation based on ideals that still guide the world today,” said Miller. “On this project’s completion, the Art Museums’ doors will open even wider to welcome new generations of guests to experience our shared, enduring story.”

Following the remarks, members of the Art Museums Board, each wearing a hard hat with the Art Museums of Colonial Williamsburg logo on the front and their name on the back, along with donors who contributed $1 million or more to the expansion campaign, dug into the ground with replica, 18th-century shovels and hoes. Other guests, including staff of the Art Museums and the Colonial Williamsburg Foundation and general public who attended the ceremony, were invited to participate and break ground so as to include as many people as possible in this momentous aspect of the project.

The Art Museums of Colonial Williamsburg are home to internationally renowned collections of American folk art through the present day and to British and American fine and decorative arts from 1670-1840. The Abby Aldrich Rockefeller Folk Art Museum is the oldest, continuously operating institution in the United States dedicated solely to the collection, exhibition and preservation of American folk art. The DeWitt Wallace Decorative Arts Museum, which marked its 30th anniversary in 2015, features furniture, paintings, silver, numismatics, ceramics, tools, textiles, maps, weapons and other media. Combined, these diverse and extensive collections play critical roles in Colonial Williamsburg’s mission to inform and engage Americans in the dramatic story of their country’s founding.

When the expansion is complete, the new wing of the building will add 60,000 square feet to the Art Museums, offering a 22-percent increase in gallery space. This will enable considerably more of the celebrated collections to be on view. New galleries will be designated for an introduction to the Art Museums; folk art; coins, currency and medals; archaeology; musical instruments; costumes; maps, prints and drawings; toys and dollhouses; tools, weapons and scientific instruments; architectural preservation; paintings; silver and metals; and an additional space for changing exhibitions.

The expansion will also significantly improve public access to the building through a new visitor-friendly entrance on South Nassau Street. This new entrance will replace a circuitous, partly-underground route with a tunnel and multiple stairs through the reconstructed Public Hospital of 1773, which was the first building in North America dedicated to treatment of the mentally ill. Additional improvements will include:

A new lobby and orientation space overlooking the pastoral site of the John Custis House and Garden, and a grand concourse that will provide access to both museums, which will improve visibility of the complex to guests approaching on foot from the Historic Area.

Guest services, such as an expanded museum café and store, will move to lobby level where they may be accessed without a ticket and will be bathed in natural light through new, expansive windows overlooking the picturesque Bicentennial Park. Car parking, including that for the mobility challenged, will also be considerably improved. In addition, the Colonial Williamsburg bus stop will move to the museum entry area from its current location near the intersection of South Henry and Francis streets.

Space and equipment for efficient operations and exhibition presentations.

Samuel Anderson Architects, based in New York City, designed the expansion. The same firm in 2006 designed the space that now houses the Abby Aldrich Rockefeller Folk Art Museum when it moved from its previous location. It is expected that the expansion construction will take approximately 24 months to complete.

About the Art Museums of Colonial Williamsburg

About The Colonial Williamsburg Foundation