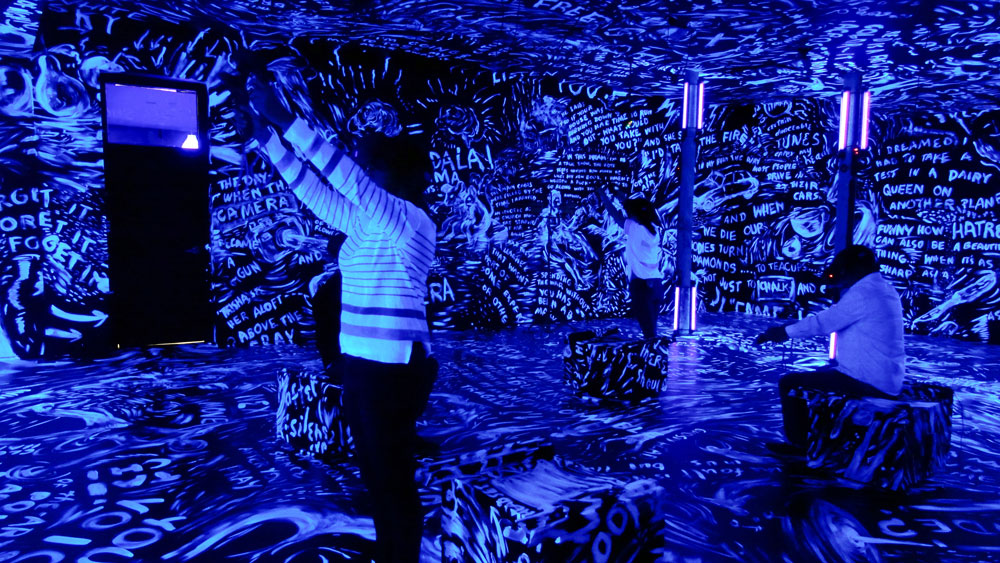 Once the preserve of game developers, space agencies, and military training facilities, virtual reality (VR) is fast becoming a formidable means for artistic expression, as evidenced by a suite of new works by notable artists making waves at museums over the past year.

These include Laurie Anderson’s story-centric The Chalkroom, which debuted at the Massachusetts Museum of Contemporary Art (Mass MoCA) in 2017, and Jon Rafman’s apocalyptic View of Harbor—in which an incoming tsunami sweeps viewers out to sea—at the Institute of Contemporary Art in Boston this past spring. And at Art Basel Hong Kong in March, a pair of immersive works by Marina Abramović and Anish Kapoor were presented by Taiwanese company HTC, maker of the Vive Virtual Reality System, a top-of-the-line consumer market headset.

In viewing these pieces, the allure of the medium is readily apparent, particularly its formidable capacity to offer an out-of-body experience—or, in the case of Kapoor’s Into Yourself—Fall (2018), an inner-body experience. The work is a visceral odyssey in which a disembodied viewer travels throughout internal organs of the human body before being jettisoned out into the vastness of the cosmos. In The Chalkroom, viewers spend some 15 minutes flying through a series of chambers covered in handwritten texts rendered in chalk—what Anderson calls “fractured language”—some of which appear to float off the walls. Encountered objects, also made of words, hover in space, their individual letters surrounding the viewer like flurries of falling snow. “In creating The Chalkroom,” says the artist, “I wanted to see what it would be like to travel through stories.” Given the vertiginous nature of the medium, VR viewers must be careful, cautions Anderson, explaining that it is not uncommon for those experiencing the artworks to stumble or fall off their chairs. “When one looks down, one sees not one’s feet but rather a void. It can take a bit of time to gain one’s balance in this virtual world.”

Viewers explore a post-human landscape in Jon Rafman’s apocalyptic work, “View of Harbor” (2017), which debuted at the Institute of Contemporary Art in Boston this past spring.  Photo: Courtesy ICA Boston

As artists seek to find their own footing within the new medium, technology is evolving to support them. “When HTC ventured into the virtual reality field with the launch of its first head-mounted display in 2015,” says Victoria Chang, director of HTC Vive Arts, “we soon realized that—as we had experienced in the smartphone arena—content was the most important thing. So, we began investing heavily in programming that was well beyond the gaming sphere, and HTC Vive Arts was born.” Launched last November, the multimillion-dollar VR initiative aims to change the way the world creates and engages with art. This spring, HTC Vive Arts became Art Basel’s first official virtual reality partner.

Over the past year, Chang has been instrumental in the development of a number of virtual reality projects, not only with artists but with the cultural institutions that support them—including Tate Modern, where HTC Vive Arts and London-based content developer Preloaded recently collaborated on a VR reconstruction of Amedeo Modigliani’s 1919 Parisian studio for the artist’s retrospective at the museum this past winter. There, headset-wearing museumgoers could virtually explore Modigliani’s Ochre Atelier, the sun-drenched room filled with his personal affects and many of his paintings in various states of completion.

“VR has become increasingly important in the museum setting, primarily as a didactic tool enabling us to re-create known places and provide visitors with virtual visits to distant or fragile places or places that no longer exist,” says Mass MoCA curator Denise Markonish, citing the Ochre Atelier at Tate as a prime example. “It’s only recently that we’ve begun to consider the medium as a means in itself to create original and often surreal environments born of an artist’s imagination.” A case in point is The Chalkroom, she says, adding that as a multimedia artist, musician, and one-time artist-in-residence at NASA, Anderson has spent her career at the forefront of technology, “playing with things that museums don’t quite know what to do with yet.” And, she says, that includes the acquisition of such works for a permanent collection.

”In creating ‘The Chalkroom’ (2017),” says artist Laurie Anderson, “I wanted to see what it would be like to travel through stories.”  Photo: Courtesy MassMOCA

For the artist commissions presented at Art Basel, HTC Vive Arts teamed up with London-based VR content developer Acute Art, which has been building a portfolio of artworks by blue-chip names as well as emerging artists since launching its cloud-based VR Museum last fall. The company’s most recent collaboration has been with artist Christo, having created a VR version of his Mastaba installation. A pyramid constructed of 7,506 bright-red, 55-gallon drums, the sculpture, which the artist conceived with his late wife and partner Jeanne-Claude, is currently floating on Serpentine Lake in London’s Hyde Park and will remain there through September 23.

“Our role is to provide artists with the technical capacity to realize their visions,” says Acute Art ceo Jacob De Geer, adding that the process can take months, if not years, depending on an artist’s fluency in alternative media such as multichannel video and how developed their vision for a given piece may be. Kapoor’s Into Yourself—Fall, he says, took some 10 months from conceptualization to completion. According to De Geer, all of the works produced by Acute Art are currently available to subscribers through HTC’s Viveport as well as via the Steam and Oculus content platforms.

“What has made VR so exciting for me as an artist is its neural and muscular interface and the relationship it forges between my brain and my physical activity,” says the Danish-Icelandic artist Olafur Eliasson, whose Rainbow (2017) is among the VR Museum’s offerings. “Instead of being merely a consumer or observer of art, VR encourages you to become a producer and participant.” Moreover, the medium, he says, has the capacity to transform intangible and otherwise ephemeral qualities such as light and atmosphere into art. In Rainbow, a virtual rainbow appears only when there is a harmonic convergence between the position of the viewer, the light source, and a curtain of virtual water droplets, as would be the case with a naturally appearing rainbow.

“Every single thing I’ve ever done, whether it’s a piece of music or a drawing or a performance, it’s about one thing: the thrill of disembodiment, and that is what virtual reality offers,” says Anderson, who readily admits she initially had misgivings about the medium. “I wasn’t really interested in it until my collaborator—Taiwanese visual artist Hsin-Chien Huang—said, ‘Let’s do something together.’ From what I had seen, it seemed brittle, harsh, and unbelievable, particularly in its representation of humans, which tend to look like they are made of rubber. But Hsin-Chien, who has been experimenting with the medium for some time, assured me it did not have to be that way. I told him that if I could create a world that was dark and looming and full of mystery, I was game. And that is what we have done with Chalkroom, which is quite gritty and tactile rather than slick and shiny, as so much of VR tends to be.”

“Anderson’s observations about the seemingly artificial nature of a lot of VR, particularly in the game space, reflects a dichotomy inherent in the medium,” says VR pioneer and one-time Google artist in residence Michael Naimark, now a visiting associate arts professor at NYU in Shanghai. “There’s the game space and there’s the cinema space, and they are uncomfortably non-overlapping.” As Naimark explains it, cinematic VR is produced by playing frame after frame of linear material, whereas VR games are produced based on a 3-D-model-driven game engine.

The attraction of cinematic VR, simply put, is that “it looks real” because in large part the material used to create it was shot by a camera, as was the case with The Chalkroom.  VR games, on the other hand, are fully interactive, especially with the addition of “haptics,” physical interfaces such as paddles and wired gloves that enable the viewer to make “physical contact” with objects within the virtual space rather than simply floating through it. “You can move a virtual chair or blow up a virtual watermelon,” says Naimark, “but, by and large, these things look cartoonish.” The real but linear offerings of cinematic VR and the interactive but cartoonish offerings of VR games, he says, reflect their disparate lineage, culture, technology, style, and content.

Artists thus far seem decidedly in the cinematic VR camp—although a few, including Marina Abramović, are beginning to experiment with the gaming space. This was evident in the Art Basel Hong Kong presentation of her climate-change-focused work, Rising (2017), in which a viewer can meet mano a mano with the artist’s digitally created avatar.

Prior to Mass MoCA commissioning The Chalkroom—one of two Anderson VR works on view at the North Adams institution through 2019—Markonish says she was wary of the medium’s artistic potential. “I think we can easily be enchanted by the toys of technology, and as a curator, I would not want to show something that was not intrinsically an important work of art. In Laurie’s hands, the medium became something wonderful as the artist was able to take it out of the gaming world and out of a didactic world and put viewers into a free-floating space that is evocative of her performances.”

Anderson and Huang have since embarked on another VR project, a closely guarded NASA-inspired piece called Moon, which will make its debut at the Louisiana Museum of Modern Art in Copenhagen on September 13. The work is one of the highlights of an exhibition leading up to next year’s celebration of the 50th anniversary of the first lunar landing.

As museums and other cultural institutions continue to venture into VR territory, private collectors are also taking notice of the medium—particularly those accustomed to acquiring alternative media. The emergence of a nascent art market for VR works was evident at Art Basel in Hong Kong. There, Berlin-based Société was tendering A New Protocol, Part II (2018) by German-Mongolian-Chinese artist Timur Si-Qin for $85,000. At the booth of Beijing-based gallery Long March Space, collectors had a chance to acquire She’s Already Gone (2017), a collaboration between Chinese artist Yu Hong and Danish VR production company Khora Contemporary. Produced in an edition of eight, the immersive piece, which traces the life of a female character through both her own time and the annals of Chinese history, was available for $100,000. According to the gallery, one of the eight editions was acquired by a Chinese collector prior to the fair’s opening.

“When it comes to the future of VR in the art space,” observes Naimark, “I hope the art community can take a leadership role and not bend to the business and entrepreneurial pressures that are so prevalent in VR right now.” At present, he says, the VR territory is so big and so unexplored that it’s hard to predict the future. “My hope is to wake up one morning and catch wind of some VR artwork that simply blows us all away.”