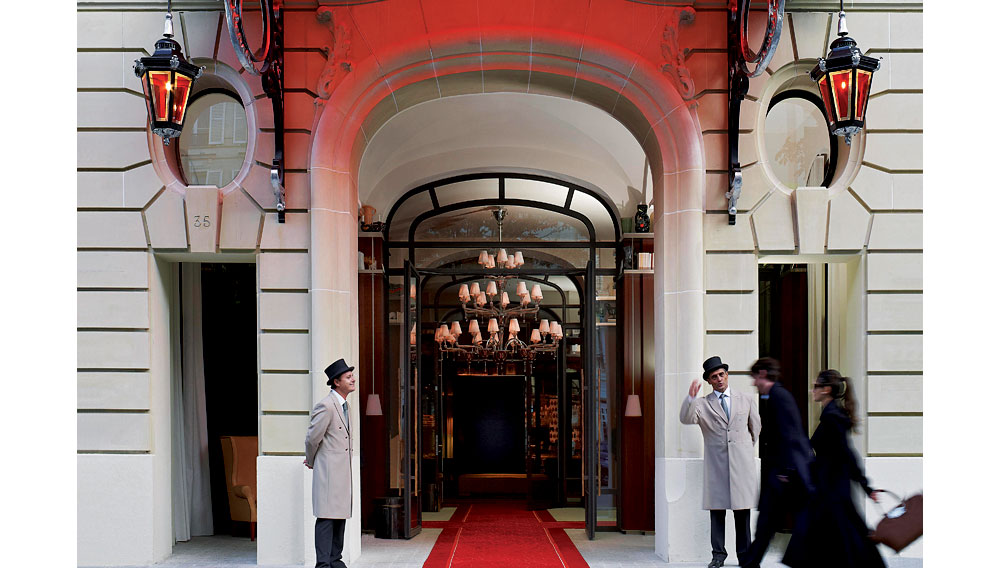 The vast contemporary art collection at the Pompidou Center in Paris has been known to overwhelm visitors, yet Domoina de Brantes wends expertly through the galleries, guiding her charges to works of particular significance and giving a tutorial on the Paris art scene along the way. Stop­ping in front of Thomas Hirschhorn’s wall-size Outgrowth, she describes the artist as “very politically engaged,” and contemplates the artwork’s rows of globes, which are pasted with images of tragic events and bandaged with masking tape as if they were swollen wounds. At Carsten Höller’s Giant Triple Mushroom, she notes that Höller is a former scientist. “He uses his research to create his art,” she explains. “This monumental mushroom is supposed to be the result of nature if we human beings don’t pay attention.”

Though she may sound like a docent or historian, de Brantes is actually an entirely new kind of art professional: the art concierge. Her position, at Le Royal Monceau–Raffles Paris, is the brainchild of Philippe Starck, the brilliantly madcap French designer who oversaw the hotel’s rebirth last winter. Within the luxury-hotel realm there is a small trend of putting fine art at the center of the experience: London’s 45 Park Lane and One Aldwych, Barcelona’s Hotel Arts, New York’s Gramercy Park Hotel, and 21c in Louisville, Ky., all show off rare works. But none takes the concept as far as Starck at Le Royal Monceau. In addition to an extensive, curated collection in public spaces and guest rooms, the 149-room Beaux-Arts hotel runs the Art District exhibition gallery (which displayed previously unseen Den­nis Hopper photographs last fall), a 99-seat cinema, and an art bookstore with more than 700 titles. Courtesy of the world’s first art concierge, the hotel also arranges most any art-related request, from private gallery and museum tours to assistance with purchases and showings in guest rooms.

The hotel’s curator, Hervé Mikaeloff—who also consults for the LVMH luxury-goods group—orchestrates the artistic experience of the property and commissions artists to produce works. He chose French artist Stéphane Calais to create a gardenlike ceiling fresco in the French restaurant La Cuisine, and Portuguese sculptor Joana Vasconcelos for an oversize teapot in the hotel garden. Russian artist Nikolas Polissky designed dozens of hunting trophies in natural, unpolished wood for an unexpected animal encounter on the first-floor landing.

De Brantes, a former gallery owner, edits the hotel’s Art for Breakfast (www.artforbreakfast.com) blog and produces a weekly newsletter of recommended exhibitions. (To see de Brantes’s February recommendations for Robb Report readers, visit www.robbreport.com/paris-art.) Among her current favorites is Danser Sa Vie, which explores the relationship between visual arts and dance and runs through April 2 at the Pompidou. Though the hotel emphasizes contemporary art, de Brantes also handles arrangements involving classical art or other areas, such as fashion. One of the most extravagant requests so far was a private party and viewing of the recent Mondrian exhibit at the Pompidou. De Brantes was mystified, though, when the guests spent only 20 minutes looking at the art before going off for dinner.