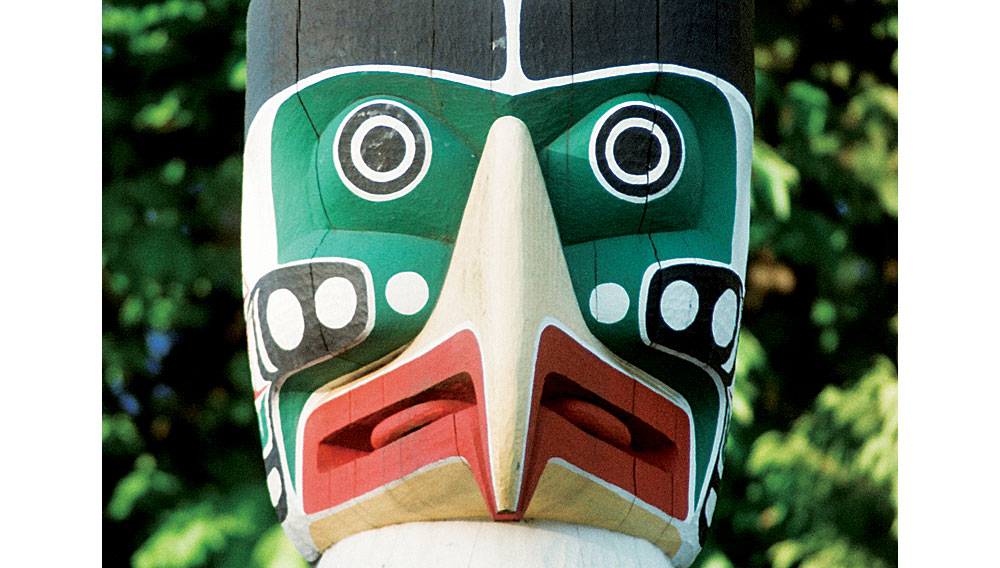 On a nondescript industrial street in Vancouver is the Bill Reid Gallery of Northwest Coast Art. The art gallery and cultural center, which opened last year, is dedicated to the man who in the latter half of the 20th century strove to bring the works of the First Nations tribes—most notably their totem poles—to the forefront of the art world.

By the early 1900s, the totem pole—with its soaring wings, glaring eyes, and gaping mouths—had become a symbol of the Pacific Northwest. The poles amazed crowds at fairs such as the World’s Columbian Exposition in Chicago in 1893 and the St. Louis World’s Fair in 1904. But in British Columbia, the totem poles were banned. So, too, was the potlatch, which pitted the wealthiest and most powerful members of a tribe against each other in feats of extreme generosity.

These laws were repealed in 1951, setting off a surge of interest in the cultures of the First Nations, as many of the Aboriginal peoples in Canada are now known. But restoring ancient cultures and their forgotten practices was not a matter of simply flipping a switch. Ceremonial paraphernalia like masks, headdresses, and dance regalia had been put aside long before and were moldering into dust. Totem poles were an enigma; the figures carved into them and the stories they told were tantamount to a forgotten language.

This is where Bill Reid—whose artwork appears on Canada’s $20 bill—came in. The multitalented artist was an unlikely cultural hero: He was born to a Haida mother and a father of Scottish and German descent in 1920, when Canadian law dictated that children of European fathers could not call themselves Indian. (After that law changed in 1985, Reid applied for Indian status.) In 1948, though already a successful radio announcer, Reid decided to follow in the footsteps of his maternal grandfather and take up gold- and silversmithing. He studied both modern-day techniques and old works of gold, silver, and argillite stored in museums, and he became the first First Nations artist born in the 20th century to decipher the symbolism of Haida jewelry.

Reid was equally adept with much larger pieces, rendering canoes and totem poles in cedar and large sculptures in bronze. Once, for the University of British Columbia’s Museum of Anthropology, he and his followers rebuilt a section of a Haida village. By the time of his death, Reid had become one of the most celebrated artists in the history of the First Nations, the recipient of numerous awards, and a member of France’s Order of Arts and Letters. His final leave-taking was true to tradition: In 1998, friends and relatives paddled a large cedar canoe of Reid’s carving on a two-day journey along the Pacific coast to bring his ashes to Tanu Island in Haida Gwaii, the site of his mother’s ancestral village. Ten years later, a foundation established in his honor opened the Vancouver gallery that bears his name.

Central to the gallery is a permanent exhibit of Reid’s art—including gold and silver jewelry, a large bronze frieze, and his works depicted on the $20 Canadian note—and the Celebration of Bill Reid Pole, a nearly 22-foot-tall cedar totem pole carved by Haida artist James Hart. Revolving exhibitions, such as Continuum: Vision and Creativity on the Northwest Coast (now through January 31, 2010), showcase area artists and help keep their customs alive.

It is the measure of Reid’s genius that his artistry did not die with him, but has instead inspired a new generation of artists to express First Nations traditions in their own way. One of these is a Coast Salish carver and graphic designer named Jody Broomfield, 32, who created the official logo commemorating the First Nations’ partnership in the 2010 Olympic and Paralympic Winter Games, in Vancouver. The Olympics, he promises, “will be the biggest potlatch the world has ever seen.”