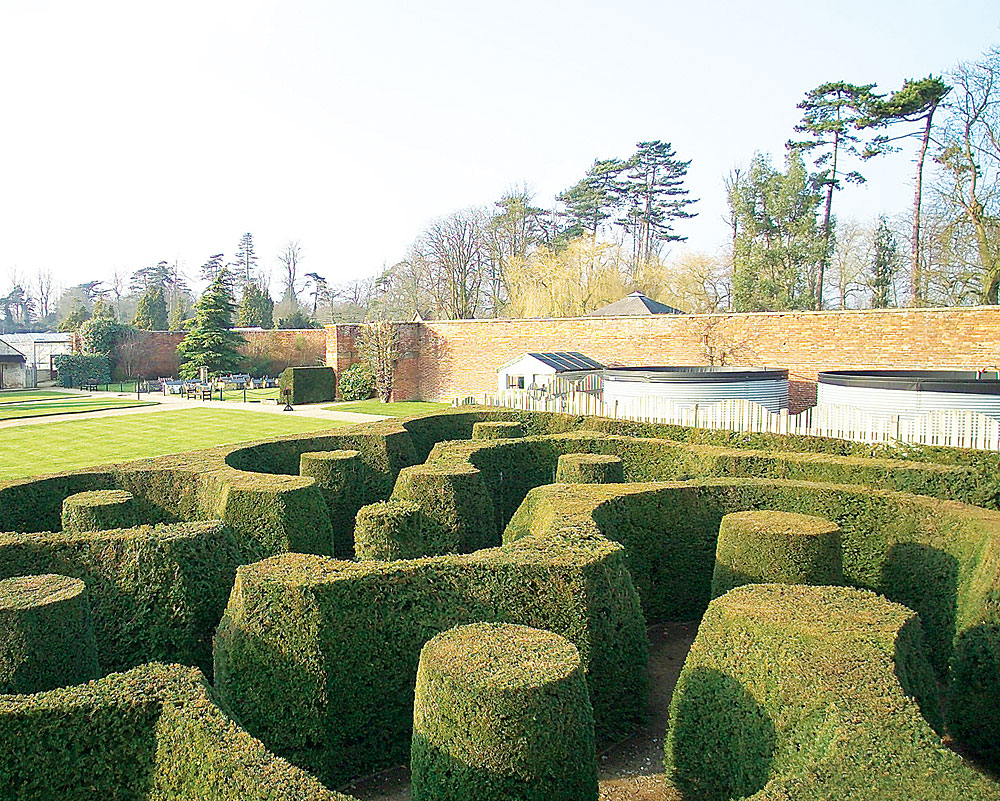 In private, maze-maker Adrian Fisher allows himself to be devilish. He and the five-member design team at his namesake firm in Dorset, England, annually plot 60 to 75 mazes that are created from a variety of different materials: stalks of corn, mirrors, mosaic tiles, wooden panels, rocks, paving stones, and hedges. Most of the mazes are for properties that are open to the public, and the designs are generally hospitable. The 1.8-acre Marlborough Maze at Blenheim Palace in Woodstock, Oxfordshire, England, which Fisher completed in 1991, is impressive but still family-friendly. The 1704 Battle at Blenheim, Bavaria, in which John Churchill, the first Duke of Marlborough, trounced the forces of King Louis XIV, serves as the maze’s theme. The path to the center leads through a stack of cannonballs, across banners, and along the shafts of blaring trumpets, all of which are rendered in 6-foot-tall yew trees.

The mazes that Fisher creates for private estates are more idiosyncratic and, in some cases, downright wicked. Consider the one that Fisher is constructing for himself at his 7-acre home in Dorset. The puzzle is 80 feet by 80 feet, which is the minimum size that he recommends for a hedgerow maze. It will not be finished until about two years from now, when the yew trees have grown to their full size. Then the maze will change as often as Fisher pleases. So that he can alter the path to the center in numerous ways, he is going to install a quartet of gates that he can lock and unlock. He also will include a 10-foot section of hedge that rotates 90 degrees. Another gate will use sensors to detect your approach and rise from the ground to block the way forward; when you turn around, the sensors will note your acquiescence, and the gate will drop and let you continue toward the center, or solution, of the maze.

“On a small scale, it’s not a problem to do those things,” says Fisher, who is 56 and has been making mazes for more than 30 years. “If I had lots of people trying to use it at once, it would be difficult to do. I can design a private garden to be much more joyful and varied. Each one is different, and normally it reflects the character of the owner.”

An English client asked for a large hedgerow maze that incorporated his favorite sport, cricket, in overt and subtle ways. The entrance to the puzzle features white wicker gates decorated with a Players Only sign, both of which appear on a professional cricket field. Also, Fisher employed willow trees because cricket players wield bats made from willow wood. Fisher placed a 10-by-6-foot cricket pavilion, a veranda-like structure, at the center and equipped it with a small refrigerator. “[The client] used it to get away from the wife for a bit,” Fisher says, “a quiet place to retreat to with a book or to have a gin and tonic.”

He never has seen the final version of his most private commission. A young woman requested that he design a maze so that she could have an image of that design depicted in a tattoo. “I told her I’d like to reserve the right to see the completed design and take a photo,” says Fisher. “She said, ‘Oh, I had a part of my anatomy in mind that you aren’t allowed to see.’ I said, ‘OK, I won’t see it,’ and she answered, ‘No, you will not.’ Her boyfriend must be thrilled with it, I suppose.”