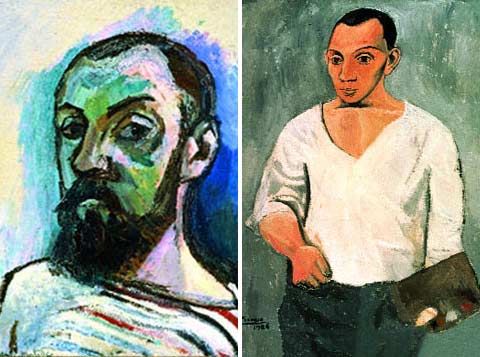 It is natural to view Henri Matisse and Pablo Picasso as artistic rivals. They were contemporaries who possessed rare and formidable artistic talent, yet differed in temperament, nationality, age, background, and creative approach. Matisse was French, 12 years Picasso’s senior, born to a father who sold grain, studied law before ultimately committing himself to painting, and produced colorful, often sensual works. Picasso was born in Spain to a father who painted and taught art, and was a child prodigy who went on to create provocative, sometimes disturbing works.

From their first meeting in 1906 to Matisse’s death in 1954, the two artists enjoyed 48 years together—sometimes as friends, sometimes as enemies, but always as the other’s only true peer. Pondering who was the better artist of the pair remains a popular pastime among art watchers. (Currently, the consensus favors Picasso.)

Despite the tendency to position the two artists as competitors, Matisse Picasso, which opens at the Museum of Modern Art’s temporary Queens location on February 13 and runs through May 19, is not designed as a battle royal of art. “This is not about King Kong vs. Godzilla. It’s about how the work impacted each artist,” says John Elderfield, chief curator at large at MoMA and one of six curators of the show. Indeed, it backs Picasso’s statement that “No one has ever looked at Matisse’s paintings more carefully than I; and no one has looked at mine more carefully than he.” Some paired originals become almost a conversation in paint. “They respond, sometimes aggressively, sometimes tentatively [to each other’s work],” Elderfield says. “To see that is wonderful. It makes the artists seem more human.”

A statement-and-response relationship is evident between Picasso’s Les Demoiselles d’Avignon (1907) and Matisse’s Bathers with a Turtle (1908), a pairing that is exclusive to the MoMA edition. “Bathers with a Turtle was Matisse’s immediate response to Les Demoiselles d’Avignon,” Elderfield explains. Both Matisse and Picasso had been exploring various forms of primitive art, from African tribal items to works by children. Matisse reacted to the tribal mask–like faces of the Demoiselles with a painting that referenced the pre-perspective style of medieval European artists. Bathers depicts boldly simplified figures against a solid field of color, stylistic features that would come to characterize Matisse’s work. “It was a landmark picture for him,” Elderfield says. “Picasso did him a great service in that way.”

Viewing the 139 originals hanging together is a privilege that is not likely to come again. “Matisse Picasso is the first full-scale historic exhibit of their works, and probably the last, given the difficulty of putting it together,” says Elderfield. He is confident that Matisse Picasso settles the debate over who was the greater artist by rendering the question moot. “I thought the show would be unsuccessful if people did not come out unsure of the answer, or think they were asking the wrong question,” he says, adding, “I don’t believe either would have been as great without the other. It was a joint activity. They spurred each other on.”