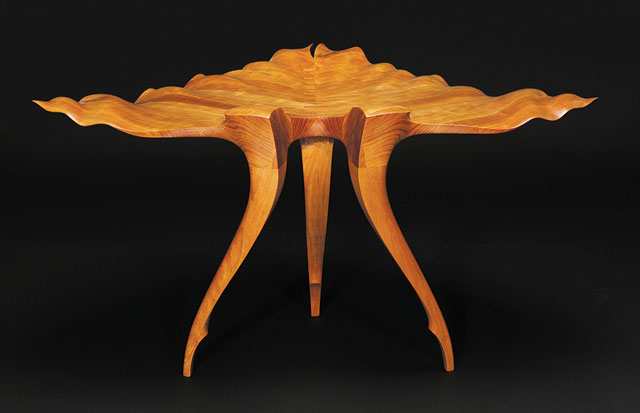 Some people experience epiphanies when they marry or when they become parents. But Mark Levin’s life was changed by a wooden bench. To Levin’s chagrin, he lost track of that bench, but he vividly recalls the day in 1972 when he presented it in front of his Ohio University architecture class. Following the professor’s instructions to make a piece of furniture based on an architectural element, Levin, then 20, created something that resembled a bridge truss. The project allowed him to display his talent for woodworking, which he had pursued as a teenager growing up in Ohio but set aside when his father demanded that he devote his undergraduate years to premed studies. Levin eventually brokered a compromise that permitted him to change his major to architecture, a field closer to his interests but still acceptable to his father.

As Levin stood in front of the class discussing his bench, which he made from Ponderosa pine and which looked like a letter C lying on its side (a shape that curved like the cables of the Golden Gate Bridge), a transformation occurred. “Until then, I was a wallflower, a behind-the-scenes person. But as I spoke, the professor left the room and brought in other professors [to listen]. I received a standing ovation at the end. Girls came up to me and talked to me,” he says. “Woodworking made me a confident person.”

Now 53 and operating his business out of a 2,500-square-foot studio in San Jose, N.M., Levin continues to make wooden furniture that draws raves—and commissions that begin at $7,500. His most striking pieces are his leaf tables, named as such because their tops resemble leaves, but which feature edges that appear to waft and billow like the skirt of a spinning figure skater. Levin plans to unveil a new version of the leaf table at the Philadelphia Furniture and Furnishings Show, scheduled to take place from April 28 through 30.

To produce these pieces, Levin first glues groups of large, laminated blocks of wood (he prefers cherry, walnut, alder, and African mahogany) into a whole that can weigh as much as 192 pounds and measure from 5 to 6 inches thick. He then uses band saws, specially fitted chain saws, automotive disc grinders, and other power tools to sculpt the raw tabletop. Levin sketches the delicate folds and curves of the table’s edge onto the wood with a black marker and refines them with rasps and hand files. When one side is complete, Levin turns over the block and repeats the process. Then he glues on the legs and carves them into shape. The finished tables can weigh as little as 34 pounds.

Levin, who estimates that each leaf table represents about 150 hours of work, arrived at the ethereal shape through trial and error. “I lost a lot of them [early on], and I still lose two pieces a year because I have to carve the edges so thin,” he says. “I have to focus, because it’s so easy to cut through the top, and the tops can’t be patched, they must be destroyed. Mistakes end up in the fire.”

Levin built his first fruit-shaped table after a client sliced an apple in half and challenged him to use one piece as a model.

In addition to the leaf series, Levin offers an equally popular line of fruit-shaped furniture that sprouted from a discussion he had more than 20 years ago with one of his keenest collectors, Elaine Snyderman. He remembers that she requested something that was “a little more radical than I had done in the past,” but she struggled to offer a more precise description. Frustrated, Snyderman grasped a nearby apple, cut it in half, gave one half to Levin, and said, “Here, Mark, build this.” Using the sliced apple as a model, he built a 16-inch-tall, 54-inch-wide, 44-inch-deep coffee table in bird’s-eye maple with a cocobolo stem. He then built a sliced pear version of the piece.

Working with wood and creating these furniture pieces holds a visceral appeal for Levin. “It fits my personality,” he says. “I’m a black-and-white person. When I start to draw [an item of furniture], I can see that this is what it’s going to be. There’s no gray, and I can see the results in the end. Nothing in the world gives me the satisfaction of finishing a good piece.”