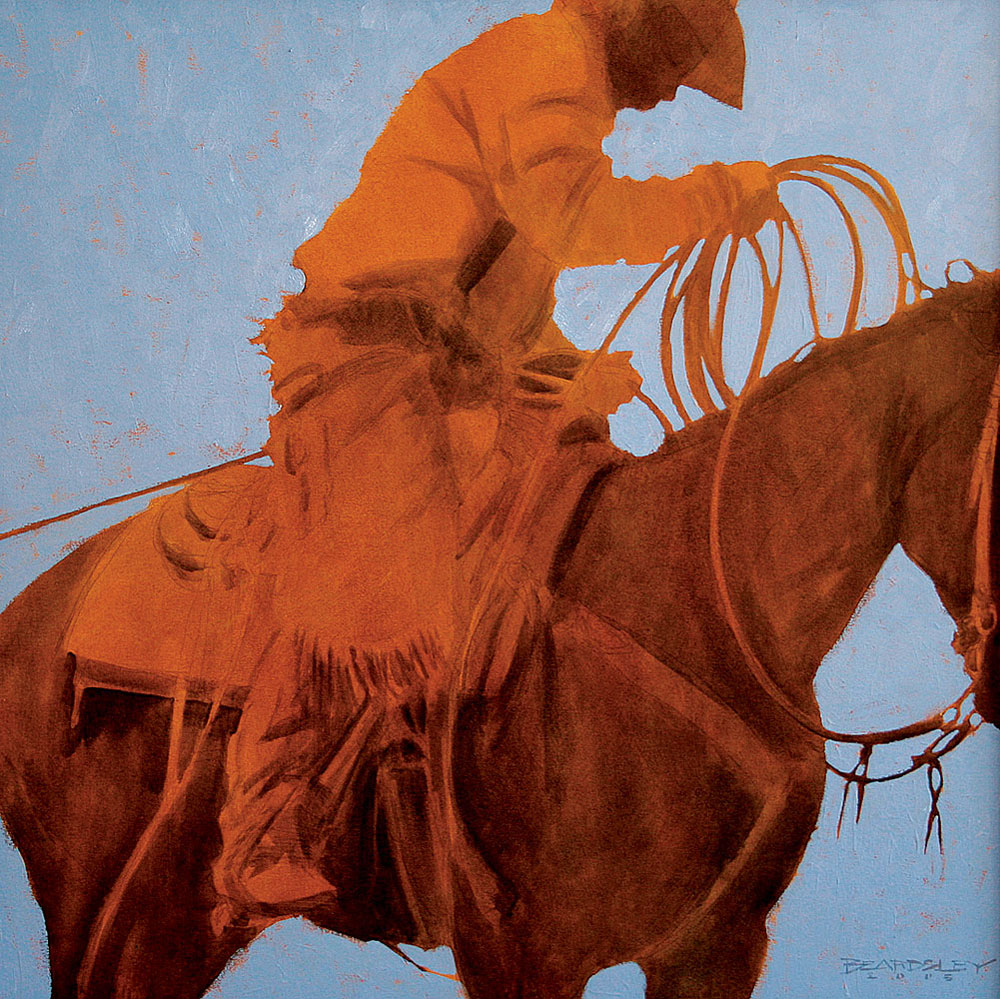 The crack of bullwhips splits the air as 12 cowboys steer hundreds of bellowing cows and calves to a dusty, sun-drenched pasture. Artist Duke Beardsley, manning his post on horseback, wheels around to block a bolting calf. As the animals settle in, he rides over to the ranch manager to discuss breeds, swap stories of other roundups, and talk of good horses and his father and grandfather, both ranchers from southeastern Colorado.

The cattle quiet, and the cowboys cull the unbranded calves. Beardsley then rides lazy eights around the herd and, with his digital camera, captures cowboys in flat buckaroo hats as they slip lariats around calves’ necks or rope the animals’ hind legs. Later he will use several hundred of these images in his studio in downtown Denver to inspire artworks that he will execute mainly in charcoal and oil.

Although Beardsley incorporates the traditional iconography of Western art in his pieces—cowboys, horses, wildlife, landscapes—he diverges from many of his peers in how he presents his subjects. Beardsley often works on larger canvases than the norm, and he crops his images in arresting ways—across a horse’s nose or a cowboy’s leg—shifting the focal point from the expected full vignette to leave a rider off-center. He also uses flame reds, yellows, and teal blues to electrify his works, forgoing a more representational, dusty-brown palette.

The artist blends into his surroundings seamlessly in his Carhartt jacket, black hat, Wranglers, and worn, fringed chaps. He grew up in Denver, working on a nearby family ranch on weekends and during summers. “A big piece of this was handed down from my uncle, granddad, and dad,” he says. “Their other jobs were primary, but they did this. They always had good horses around. They loved to ride.”

The nuances that Beardsley observes in the field—how cowboys rope in different parts of the country, how their dress and gear vary, how different animals relate to the land—show up in his artwork. Cowhands are particularly interesting to watch, he says, because they follow centuries-old traditions of ranching but still show subtle distinctions in technique when working on horseback. “There’s always some little difference,” he says. “My brother and I laugh about it—he’s as big a junkie as I am. But he does get tired of it. I never do.”

Beardsley says that the risks he takes in presentation turn off some buyers of Western art, but adds that his work appeals increasingly to collectors of other genres. “For every client I lose, I pick up two or three more,” he says. “My art parallels who I am.”