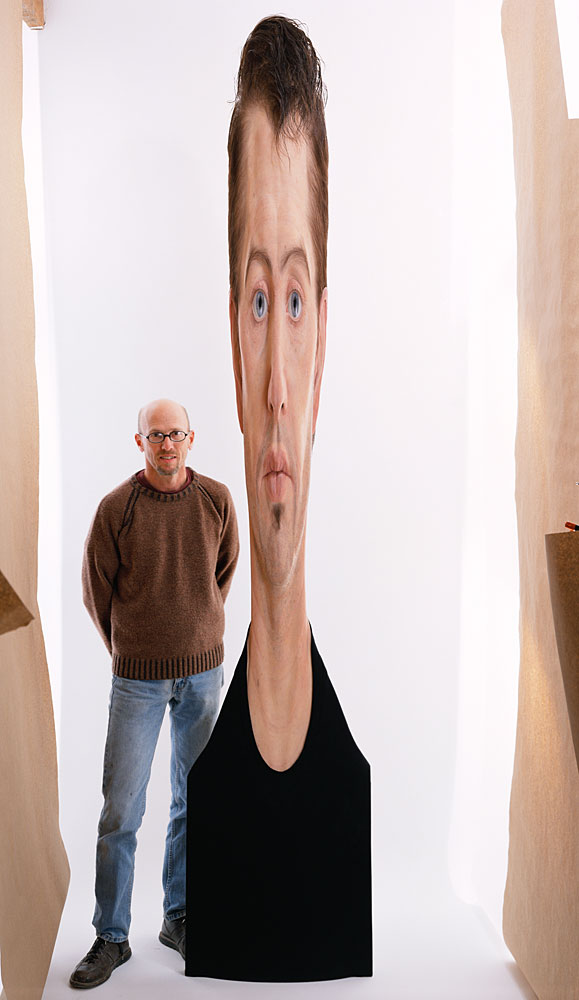 Evan Penny’s portrait sculptures can be painstakingly realistic and at the same time completely absurd. The Toronto artist pockmarks their silicone skins with pores, fashions faces and necks with tiny wrinkles and folds that are too minor for most cameras to record, and roots tens of thousands of hairs into heads, eyebrows, and beards one by one with a modified sewing needle. But his artworks most often are larger or smaller than life-size, and sometimes he warps them by slanting them or stretching them to implausible lengths.

“Every representation of reality is an artifice. That’s just the way it is,” Penny says. “That’s my story, what I’m interested in: amplifying reality by amplifying artifice. My art is about that dynamic.”

He relies in part on materials and techniques that he employed while doing special effects work in Toronto for more than two dozen movies and television shows from the late 1980s to the late 1990s. “I learned a lot on films, but it was an indirect process,” Penny says, adding that the freelance jobs left him little time to pursue his art career. “I never had a comfortable relationship with it. I enjoyed it, but I found it a threat to my artistic identity. I was in the heart of pop culture. But that conflict was ultimately really informative. When I left [special effects], I felt I could allow it into my own work.”

Penny invests much effort in his work. After sculpting a prototype in clay, he makes a mold and fills it with layer upon layer of silicone, into which he might build dark moles, birthmarks, and other skin blemishes. “Because it’s silicone, you want to make sure the color is internal,” he says. “It won’t accept treatment on the surface. Paint can wipe right off.” Penny will spend an entire day sculpting, casting, painting, and polishing a pair of plastic eyes, while inserting hairs can consume more time than the actual sculpture itself requires. He produces a handful of pieces annually, and each fetches a five- or six-figure sum.

A sculpture such as Stretch #1, a 2003 work that is shown here, distorts reality, but Penny employs a computer to ensure that it does so in a precise manner. He would work on Stretch #1 and then photograph it at the end of each day. Then, on the computer screen, he would compress the photo and see if the compressed image looked normal. “If it didn’t, I’d fix the sculpture so that the translated stretched image would look normal,” he says. “I was playing with the idea that the photo dictates reality, proceeding as if the reference was taken away. The normal version exists only in photographs.”

Penny’s recent project Panagiota: Conversation #1 also involved photography. He collaborated with a photographer who used a special camera to shoot multiple images of a live model over the course of 30 seconds and then composite those shots into one image. The resulting photograph reflects dozens of subtle, fleeting movements. Penny converted that photo into a sculpture that fixed something evanescent—a snatch of small talk—forever in silicone.

The sculpture took Penny six months to complete and is the first in a series. “I’m interested in how his camera represents time, how time plays out in a static image,” Penny says. “The camera records the passage of time, but you can see that only if the model moves, not if she stands still. I’m interested in the implications of that, if I can make a 3-D rendering of that.”