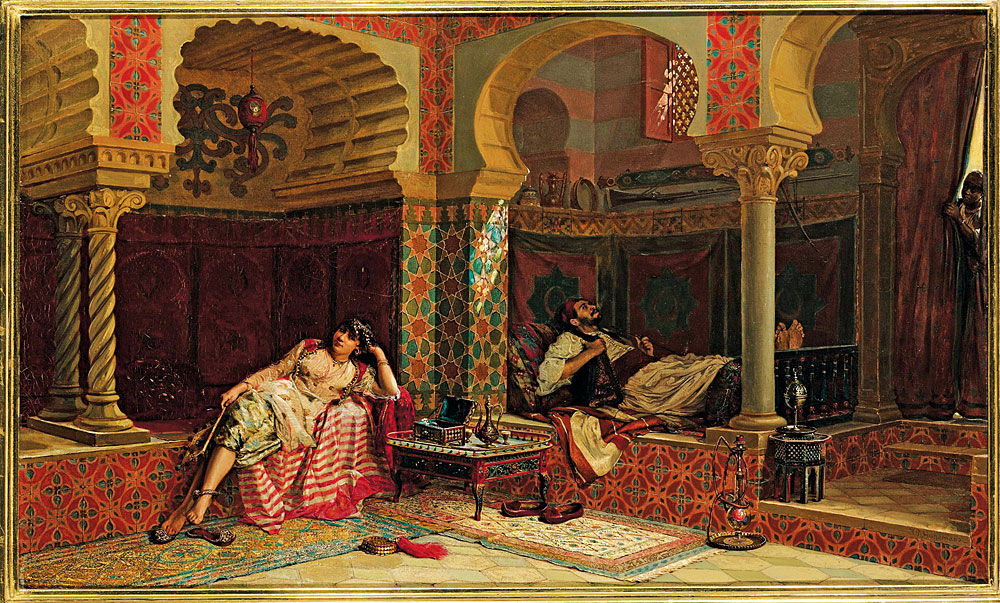 Having drifted on and off the Western cultural radar for decades, the Qatari art market is enjoying a seemingly permanent revival that is rapidly influencing the artistic landscape of nearby emirates.

“Doha is today a center of dynamic economic and cultural growth,” says Bill Ruprecht, Sotheby’s president and CEO. Jussi Pylkkänen, president of Christie’s Europe and the Middle East, adds, “This region drives the Middle Eastern art market. It will be very important to the global art scene in the coming years.”

Generations of European painters have found inspiration in the decadence of hookah-smoking sultans, obsequious odalisques, and scenes of exaggerated servitude, and Middle Eastern artists have answered with well-received abstract and realistic representations of their surroundings. Among the former is Belgian painter Jan Baptist Huysmans, who became entranced by Middle Eastern cultures upon his arrival in the region in the mid-19th century. He soon began bringing vibrant scenes of daily life back to the hungry European art market. Austrian artist Rudolf Ernst, whose visual accounts of Middle Eastern society have sold well at auctions in recent years, followed Huysmans. (Sotheby’s valued Ernst’s The Fountain of Ahmed III, Istanbul, at $650,000 to $850,000 prior to a New York sale last April; the piece sold for $1.27 million, further elevating the artist’s stature in the Orientalist market.)

Paintings by both Huysmans and Ernst will headline the first major international auction series hosted by Sotheby’s in the Middle East, which will be held March 18 and 19 at the Ritz-Carlton hotel in Doha, Qatar’s capital city. Sotheby’s estimates that Huysmans’ A Private Meeting will bring in between $60,000 and $80,000; the auction house values The Waterpipe Smoker, by the better-known Ernst, at $400,000 to $600,000. The auction will also include a contemporary art sale, consisting of works by international, Arab, and Iranian artists, with Mohammad Ehsai’s conceptual diptych Eshgh (Love) predicted to fetch between $150,000 and $200,000. “Our links with Qatar go back almost 20 years, when we held pioneering sales for Arab stallions in the U.S., which attracted great interest from [the region],” Ruprecht notes. “This is the beginning of an exciting new phase.”

For its part, Christie’s has had a strong presence in the Middle East for several years. Pulling in $120 million in semiannual Dubai art-and-jewelry sales since opening an office there in 2005, the auction house helped lay the groundwork for major Western players setting stakes in the region. “We have seen a steady growth in the Middle Eastern market over the past few years,” Pylkkänen says. “Even when other global markets have somewhat buckled under economic pressures, our sales in this realm have remained extremely healthy.” Christie’s will hold its next Dubai art sale April 29, with works by European, Turkish, Iranian, and Emirati artists.