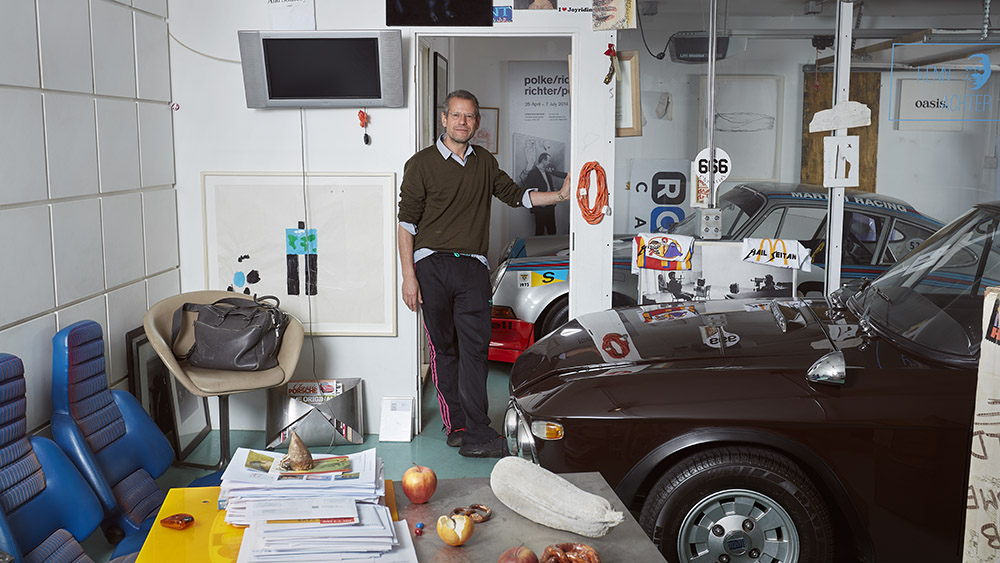 Perhaps nobody lives their passions quite like Kenny Schachter. The London-based artist turned dealer, curator and mega-collector has earned his reputation as the straight-talking provocateur of the art world, whether he’s predicting the future of the market, sizing up the latest fair or snapping up another record-breaking piece at auction. But Schachter is obsessed with more than art—he’s a serial acquirer of everything from motors and fashion to cheese. From his classic-car-filled home office in Kensington, he shares what’s driving him right now.

I buy art virtually every week so I’m always adding something to my collection. The most recent were some paintings by Ambera Wellmann, a young Canadian painter based in Berlin, and watercolors by Stanley Whitney.

A monochromatic joke painting by Richard Prince that I underbid at Christie’s last November.

Vintage Adidas track pants. If there was a source for these wonders in polyester, I wouldn’t share it with you because I covet them so much. But sadly, you can hardly even find a used pair online. They are rarer than gems—not for everyone, but hard to let go.

Yes, it’s an old battery-powered early-1990s Rolex that I inherited from my father-in-law.

Where do you buy your clothes?

For shirts, I like Majestic Filatures in Paris; for jeans, Acne. I like the sweaters from Elder Statesman. And I wear Asics sneakers with customized laces from Mr. Lacy.

A 1973 Porsche 911 RSR prototype that came in fourth place in Le Mans that year. It doesn’t get much better than that if I do say so myself.

Cheese! Parmesan, Jarlsberg—really anything I can find in the fridge. There’s a study that came out a few years ago that revealed cheese affects areas of the brain similarly to drugs.

I keep it simple: something on the rocks—usually Monkey 47 gin. When it comes to food and booze, I am a bit eccentric. I am not a foodie or wine connoisseur. In fact, I can admit I am not sure there is any wine or spirit that I actually like, except for Monkey 47. It has a distinct, flavorful taste that doesn’t quite resemble any other alcohol.

The Baur au Lac in Zurich. My friends own the place, and it is the best of all the world. The service is so extremely good and personal that it adds a dimension beyond the rooms alone. It’s from another time.

What are your regular tables in London, New York and LA?

There’s only one: the Wolseley in London. My table is right in the central geography of the restaurant.

My calendar is still in a book! I don’t even keep a digital version of it. Any generic version from Ryman, my local London stationery store, will do. Oddly, its diaries start with the month of August.

What is your email etiquette?

I am known for writing brusque emails mainly contained in the subject line. And when it comes to reading emails, I am known for not scrolling past one screen’s worth of info—so be warned!

I was going to say to learn a language besides English, but as a writer, I still find English so beguiling. My new skill would be to enlarge the small reservoir of English-language words in my head.

What’s your most annoying quality?

I am brutally honest.

Anyone who pursued a dream and never capitulated or settled.

Everything that’s good: a sweater, shoes, a 1973 Lotus, a 1970s Wayne Thiebaud drawing . . . I don’t distinguish between anything great. I have a very broad, democratic and nonhierarchical sense of design, art and aesthetics.