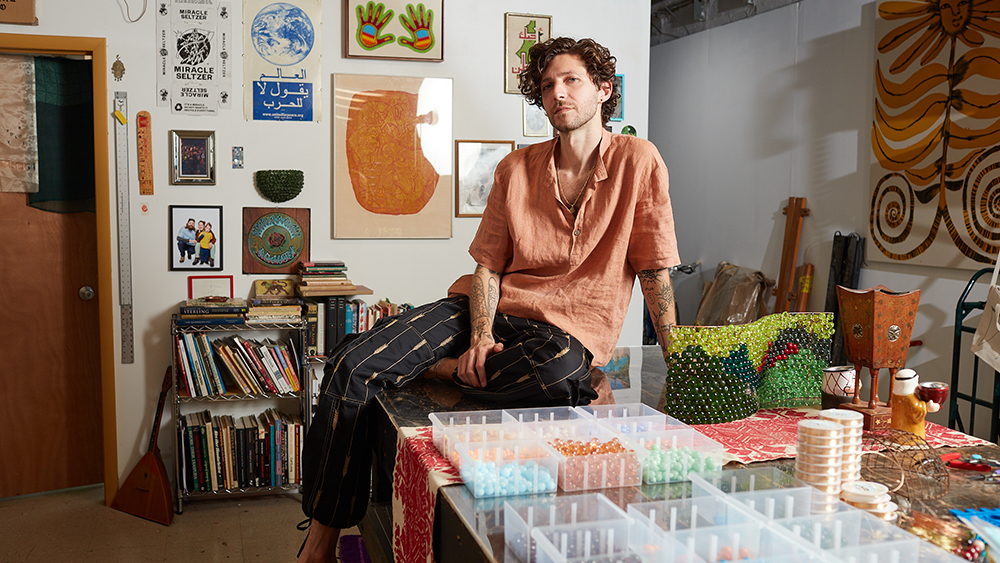 The cozy workroom in the Gowanus section of Brooklyn looks like a cross between a grad student’s bohemian pad—there’s a well-worn couch and an assortment of curiosities on one wall—and a well-stocked craft store, with shelves stowing hundreds of balls of thread in brilliant pinks, reds, yellows and greens. Here, Jordan Nassar painstakingly embroiders the intricately patterned, subtly political “paintings” that have quickly won him an excited following.

On a sticky summer morning, he’s sitting at his desk, playing with a ball of black thread as he talks about his growing practice, which borrows traditional Palestinian craft techniques and motifs. The 35-year-old didn’t become an artist until well into his 20s. After growing up on New York’s Upper West Side and studying languages at Middlebury College, he moved to Berlin on a whim. There Nassar landed a job at a small gallery, where he received a crash course in the inner workings of the art world.

Berlin also served, indirectly, as a catalyst for embracing his Middle Eastern heritage (his father is of Palestinian descent; his mother, Polish). He absorbed the influence of the city’s vibrant Turkish and Arab communities and also met his husband, Israeli artist Amir Guberstein, who brought him to visit Tel Aviv. “I think there was guilt about dating an Israeli that gave me an urge to connect with my Palestinian identity,” says Nassar, twisting a red strand around his fingers.

He had taken up crochet and weaving as hobbies but then thought about tatreez, the embroidered textiles ubiquitous in Palestinian-diaspora homes. Nassar spent the next several years “homeschooling art school,” as he puts it with a laugh, teaching himself how to stitch and, conceptually, how to elevate the skill to art. He began reinterpreting the geometric designs found in tatreez into abstract landscapes and other images, much the way pixels build digital pictures or dots of pigment create pointillist paintings. Nassar was in his first group exhibition in 2014; a year later, he made his solo debut.

Perhaps owing to his gallery experience, Nassar is extremely pragmatic about his pursuit, which is why he stretches his finished pieces like canvases rather than tacking them to the wall or making pillows. He has no desire for his work to prompt the question “Is it art?”

“It’s business,” Nassar says. “It’s not doing you any good if it’s not selling. Things can be beautiful and smart.”

That embroidery has long been dismissed as “women’s work” was neither a deterrent nor a motivation for Nassar. “Honestly, it didn’t enter my mind,” he says. “I was teased and called a girl until people learned the word ‘faggot’ and called me that. It resulted in a kind of freedom. I didn’t think in terms of ‘girlish’ or ‘boyish,’ because people would tease me regardless. Ten years later, it didn’t even dawn on me that it was women’s work.”

The Palestinian women embroiderers he visited on the West Bank while on an artist residency in Jaffa, Israel, giggled at first, but once they saw his handiwork, he says, “even they stopped caring I was a boy.” He now frequently collaborates with them, inviting the women to embroider on his panels, following his designs. Several such pieces hang in another room of the studio, including a type he casually calls “split screen,” with two joined panels made by the women and a central image he then stitched himself.

With four new shows slated for this fall—at James Cohan in New York, Anat Ebgi in Los Angeles, Louisville’s KMAC Museum and the inaugural Asia Society Triennial in New York—and a single piece requiring up to 100,000 stitches, Nassar had to scramble when the global pandemic struck. He could no longer rely on the Palestinians’ contributions, so he leaned more on his New York assistants—and his own labor. “I’m embroidering 24/7,” he says. “But there are not enough hours in the day to execute enough work for the exhibitions.”

Adding to the intensity, Nassar has been determined to pursue a new direction for his debut at Cohan: sculptures assembled from glass beads, another ancient Palestinian medium. He’d planned to have artisans on the West Bank make the baubles but had to resort to learning the technique himself at Brooklyn Glass, where he has spent up to four days a week blowing roughly 150 beads a day in a rainbow of hues. But because the sculptures will require 700 to 3,000 beads each, he’s finally getting some help.

Nassar shows off a test-run: a tabletop piece in which the beads act as pixels to form a rolling landscape on a metal frame. “The idea is to continue with my visual language but in a new medium,” he says.

For all the artworks still in progress and the prospect of hard deadlines, Nassar seems surprisingly chill. “The stressful thing is when I don’t know what to do,” he says. “This is just exciting.”