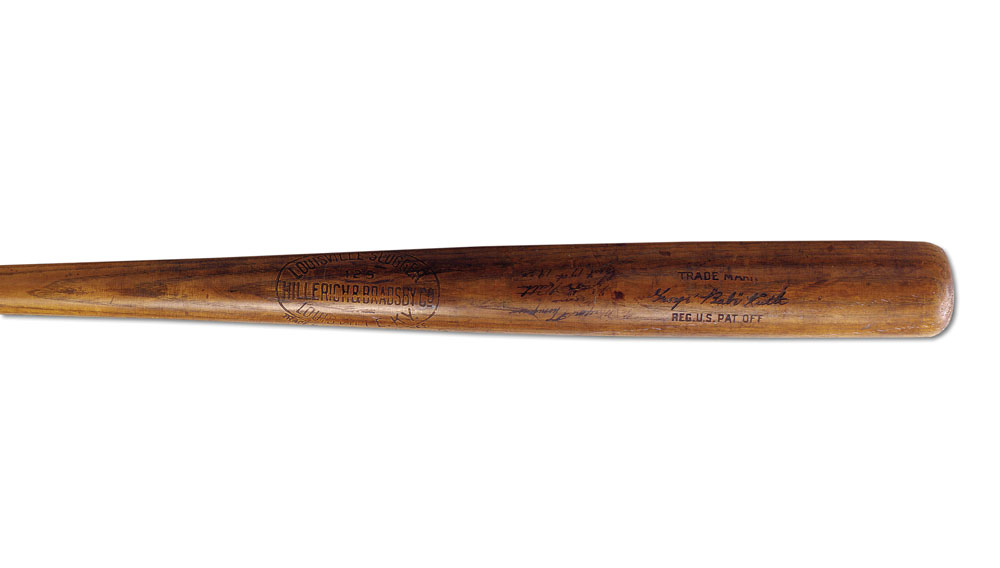 Ty Cobb, Ted Williams, and Tony Gwynn are among the original owners of the 80 or so bats in Scott Foraker’s baseball memorabilia collection. A lifelong Yankees fan who grew up in northern New Jersey before relocating to California, Foraker also has bats that once belonged to Lou Gehrig and Mickey Mantle. He turned his attention to bats in the early 1990s, after he had acquired most of the trading cards that he wanted. “Bats bring you closer to the game,” says Foraker, who is a vice president for Amgen, a biotechnology company based in Thousand Oaks, Calif. “They’re the tools of the trade.”

Foraker’s favorite is a 42.5-ounce Louisville Slugger that he procured 10 years ago during an SCP Auctions sale. Babe Ruth swung it during the 1920 season, his first with the Yankees, before giving it to William “Big Bill” Thompson, the

Prohibition-era mayor of Chicago who has been called one of the most corrupt public officials in U.S. history. “He was an interesting cat,” says Foraker.

Toward the end of the season, the Yankees were in Chicago for a series with the White Sox, and the mayor wanted a photo op with Ruth, so he invited him to his office. Ruth obliged and surprised Big Bill with the bat, which bears the inscription, “To Mayor Thompson, From Babe Ruth, September 17, 1920.” Foraker also has a photo of Ruth presenting the bat to the mayor. “It may be the only Ruth bat in the world with a photograph documenting its provenance,” he says.

Judging from the bat’s extensive wear, Ruth used it to hit at least some of his 54 home runs that season, when he shattered the record of 29 he had set a year earlier with the Red Sox. “Ruth was beginning to transform baseball that first year with the Yankees,” says Foraker. “He hit more home runs that season than some entire teams did. He was becoming a big deal.”