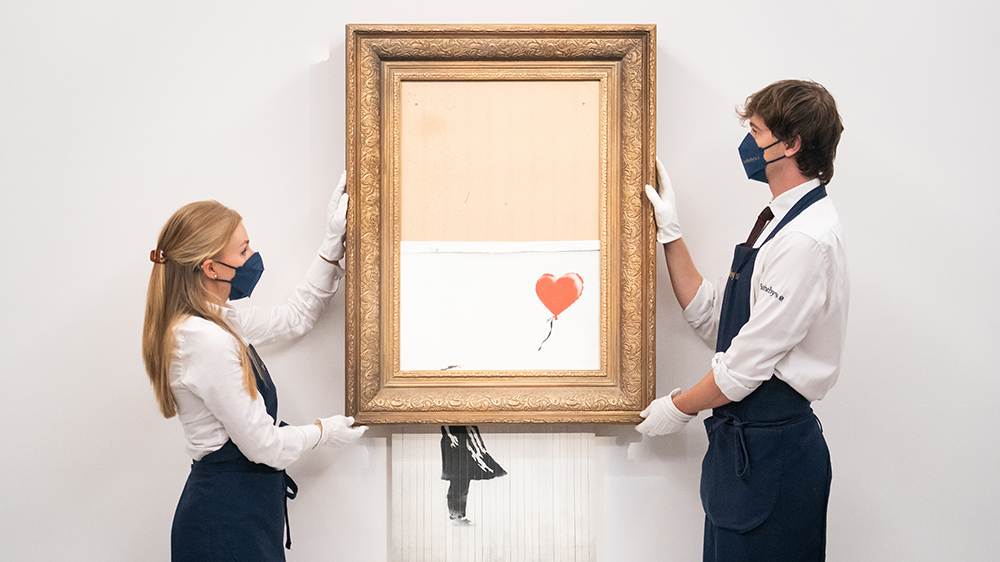 One of Banksy’s most infamous works is now also his most expensive.

Love is in the Bin, the painting that partially shredded itself after it was sold at auction in 2018, sold for $25.4 million at Sotheby’s Contemporary Art Sale in London on Thursday evening, according to the auction house’s website. The gavel price represents a new auction record for the mysterious artist, beating out the $23 million his painting Game Changer sold for this past March.

The new record holder was the subject of a bidding war between nine parties that lasted ten minutes and was won by an anonymous collector represented by Nick Buckley Wood, according BBC News. The sale price easily beat the $5.5 million to $8.3 million the lot had been expected to sell for, signifying just how intense the demand was for the notorious work.

Banky’s “Love is in the Bin”  Sotheby's

Even if the painting had sold for the low end of that estimate, it would have marked a substantial return for its seller, whose name has also not been revealed (although the auction house did say it is a woman who is a long-term client). They purchased Love is in the Bin for $1.4 million in October 2018, at another auction held by Sotheby’s.

Of course, when the anonymous seller bought the painting it was known by another name, Girl with Balloon. The name change owes itself to what happened after the painting sold. As soon as the gavel sounded, the bottom half of the canvas descended into a shredder installed within its gold frame, partially destroying itself. It was easily one of the most shocking moments from the past decade in the art world and also the first time an artwork was created at an auction.

Sotheby’s has long held that it had no idea what Banksy had planned for the work. “It appears we just got Banksy-ed,” Alex Branczik, the auction house’s head of contemporary art in Europe, said in a statement at the time. Banksy confirmed as much in an Instagram post, in which he wrote, “Some people think the auction house were in on it, they weren’t.”

Whatever the seller’s feelings were when they watched Girl with Balloon turn itself into Love is in the Bin, we’re guessing they’re pretty pleased with how things have ultimately played out.