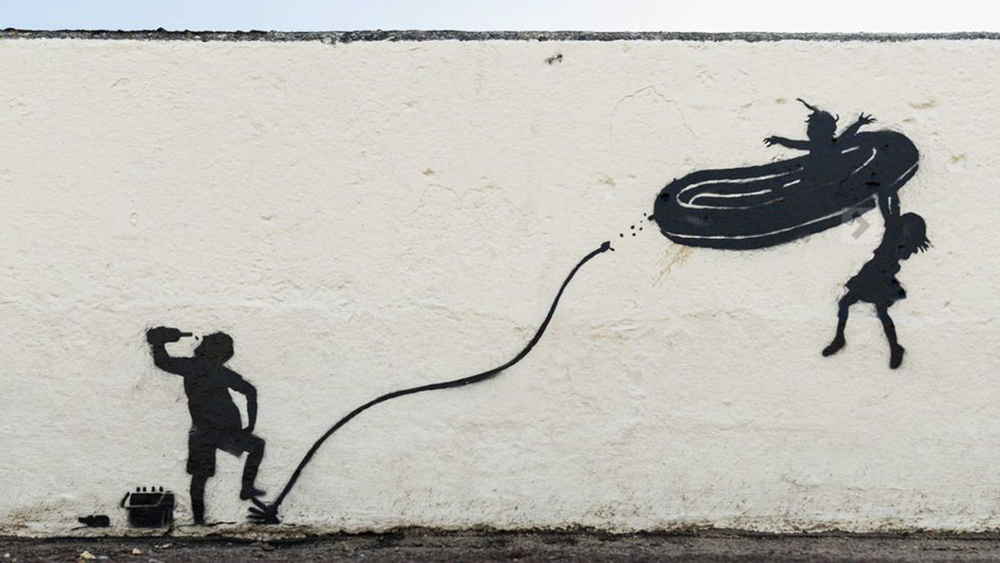 The elusive street artist Banksy is at it once again, producing a slew of works that have appeared along the east coast of England, the country he calls home. He confirmed that he was the creator of the works by way of an Instagram video focused on his travels in a camper van.

The first of the murals, featuring a couple dancing atop a bus shelter and a man playing an accordion, was spotted in Great Yarmouth, followed by one showing an arcade toy-grabber crane that appeared in the nearby town of Gorleston. More artworks—one depicting a child building a sandcastle with a crowbar in Lowestoft, the other featuring three children in a boat in Oulton Broad—soon arrived.

In an unusual move for the graffiti artist, Banksy also left a miniature thatched stable bearing his signature at the Merrivale Model Village.

In the short film posted to Instagram, titled “A Great British Spraycation,” the artist is shown finishing a mural of a rat sipping a cocktail.

The post helped bring attention to some of the more innocuous murals created during the art-making spree, such as an ice cream cone and tongue added to a statue of Frederick Savage, a 19th century mayor of King’s Lynn. The film also captures the reaction of passersby, with one local calling Banksy’s mural of the girl building a sandcastle “mindless vandalism.”

One of the murals from this prolific period is already gone. Earlier this week, a Banksy mural depicting two children on an inflatable dinghy was taken off view by local authorities in Great Yarmouth. Council members in the town told the BBC that the artwork was covered up amid “sensitivity” to a young girl who died after being flung from an inflatable trampoline on a nearby beach in 2018. The Great Yarmouth Borough Council said concealing the work was “the right decision, respecting local people and feelings.”