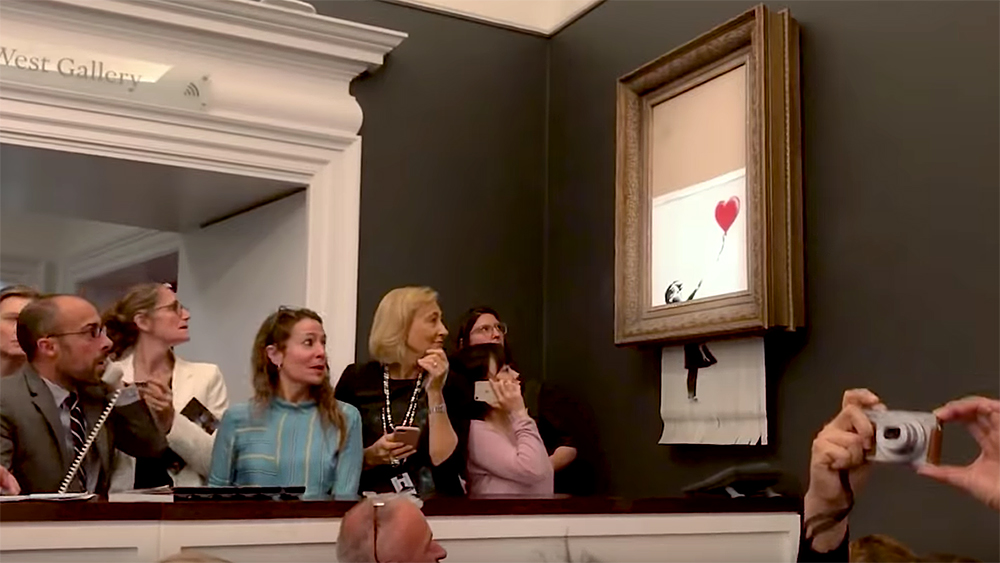 Nearly a fortnight after Banksy made headlines at Sotheby’s in London with his spectacular self-destructing painting, the artist has posted a video titled Shredding the Girl and Balloon: The Director’s Cut (check it out below) that provides far more detail on just how he managed to pull off the caper, which caught the art world by surprise.

To recap for those who may have missed the shenanigans, the Frieze Week sale of postwar and contemporary art at the house on October 5 ended with what might best be described as a masterful marketing stunt (or perhaps a pull-out-the-stops piece of performance art, depending on who you ask). As the gavel fell on street artist Banksy’s Girl with Balloon (2006) for £860,000 ($1.13 million)—catalog Lot 67 and the evening’s final offering—the “spray paint and acrylic on canvas, mounted on board” began to slowly slip through a built-in shredder hidden within the frame as the prankster artist posted on Instagram “Going, going, gone.”

“What a prank,” Brooke Lampley, vice chairman of global fine arts for Sotheby’s told Robb Report immediately after the sale, fueling speculation that the house may have somehow been in on the stunt. After all, how could such an embedded device have eluded conservators and auction house specialists?

But it seems slipping by such tight security might be easier than one might have imagined if one is willing to pay a sufficient seller’s fee and knows just the right people, at least according to London-based art-world insider and frequent Artnet contributor Kenny Schrachter, whose source, “Deep Pockets,” was able to shed some light on the deal. The “consignor”—via a PR for the artist—it seems, was only willing to sell the painting if 1) it was given prime positioning in the sale room; 2) it would be offered late in the sale; and 3) it was not examined out of the frame. “They simply said there would be no deal if inspection was required,” Schrachter told Robb Report.

Despite these revelations, the house has continued to officially deny participating in the act, although it seems at least someone in the room was in on the deal.

According to the house, the purchaser—a female European collector and longtime client—seems quite happy to have the now half-shredded work. It may have, in fact, dramatically increased rather than decreased in value as a result of the theatrical alteration—as the artist might have intended. Moreover, according to the video, the whole work, not just half, was to have been destroyed. The work has since been rechristened Love Is in the Bin, and the artist—the likely consignor—has since reissued a certificate of authenticity.

Commenting on the stunt, street-art curator Roger Gastman, who has worked with the artist, said, “Banksy continues to amaze me with his ingenuity,” adding, “He continues prove that you can be a great artist 100 percent on your own terms.”