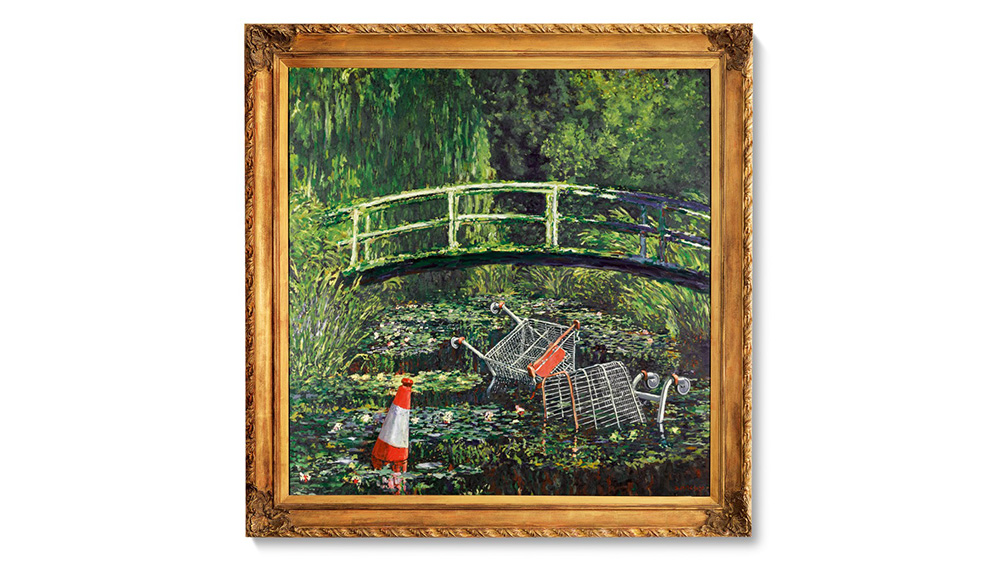 It doesn’t seem to matter how much Banksy skewers capitalism. Those who most profit from it still shell out big bucks to own his work. Case in point: On Wednesday, the anonymous street artist’s cheekily titled Show Me the Monet (2005) sold for just shy of $10 million at Sotheby’s, nearly double pre-auction estimates.

The oil painting, a send-up of Claude Monet’s Bridge Over a Pond of Water Lilies (1899), was included as part of the London auction house’s latest Contemporary Art Evening Auction sale. The work reimagines the French master’s bucolic original as more contemporary scene filled with trash and refuse, including a traffic cone and two half-submerged shopping carts. The pointed interpretation was originally part of his 2005 show, Crude Oils: A Gallery of Re-mixed Masterpieces, Vandalism and Vermin, in which he applied the same treatment to works by Edward Hopper, Jack Vettriano and Vincent van Gogh.

“The vandalized paintings reflect life as it is now,” the artist said of the painting during a television interview in 2005. “We don’t live in a world like [the one featured in John Constable’s The Hay Wain] anymore and, if you do, there is probably a travelers’s camp on the other side of the hill. The real damage done to our environment is not done by graffiti writers and drunken teenagers, but by big business. . .exactly the people who put gold-framed pictures of landscapes on their walls and try to tell the rest of us how to behave.”

Show Me the Monet’s final hammer price of £7.6 million (about $9.9 million) followed a nine-minute bidding war. That easily exceeded the $3.9 million to $6.5 million pre-sale estimates, and it’s the second most paid for a Banksy work at auction. The record is held by Devolved Parliament. The 2009 painting, which depicts the UK’s House of Commons filled with chimpanzees, sold for $12.2 million at Sotheby’s last year.