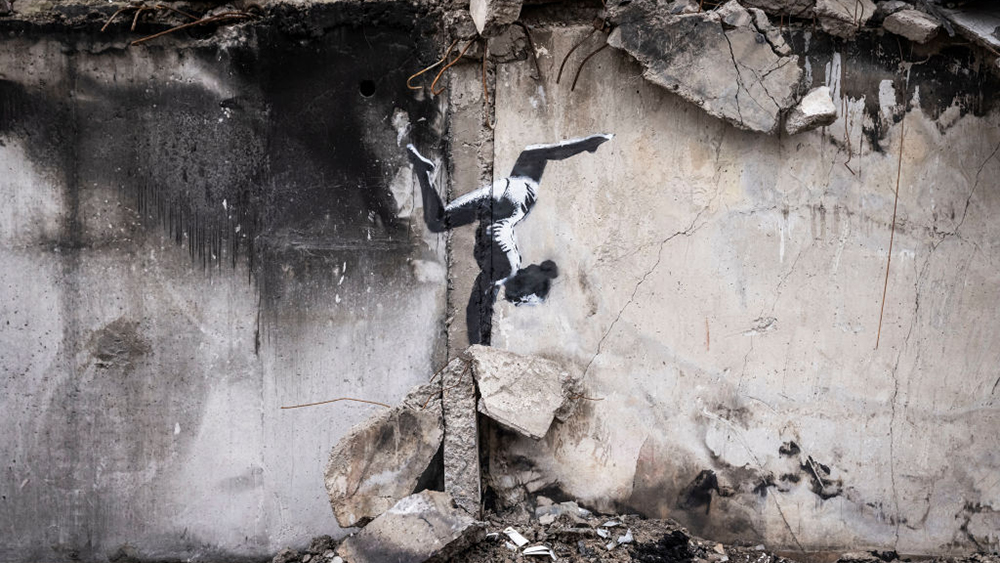 The elusive street artist Banksy debuted a new work Friday in Borodyanka, Ukraine, where an image of a woman flipping herself over using her hands now appears on a partly destroyed building.

As usual, Banksy debuted the work on his Instagram, where the post has garnered well over 1.6 million likes.

The woman’s image is displayed so that it appears as though she is balancing on the building’s foundation, which now exists largely as rubble. Banksy posted several views of the new work that accentuate just how small it is in comparison to this structure. If seen from afar, one would likely not even notice this work.

Another viral image that did not appear in that Instagram post shows a boy trouncing a man that is spray painted on a cracked wall. Many have linked that piece to Banksy, although it remains unclear, as it often does with all things related to him, whether he is the artist behind it.

Yet another image that did not appear in the post shows a spray-painted gymnast twirling a streamer. Because of the way the picture is positioned, she stands atop a hole in a wall.

While Banksy is known mainly for his sly stunts in England, the country where the anonymous artist is known to be based, he has not shied away from creating art in settings elsewhere that have made the news for various reasons. He once spray painted a piece on Israel’s separation barrier in the West Bank, and he created murals in Calais, France, the city that migrants often pass through on their way to the U.K.

Borodyanka, a town about an hour northwest of Kyiv, was among the many towns occupied by Russian forces during the initial invasion. By the time troops withdrew in April, they had upended daily life for its citizens. According to NPR, Ukrainian officials said at the time that Russians had bombed civilian areas on purpose.