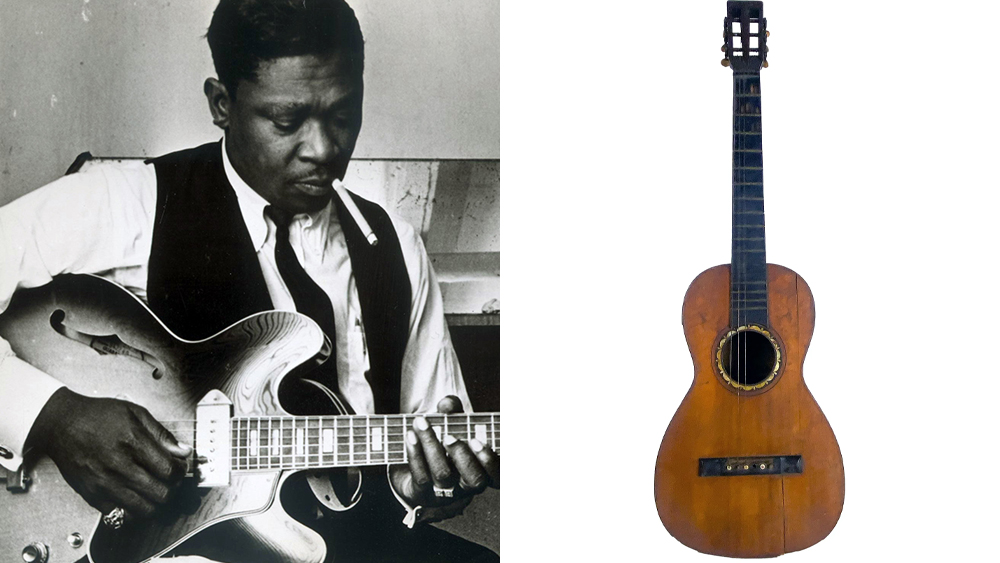 The guitar that kickstarted B.B. King’s career is going under the gavel at Guernsey’s this summer.

The auction house’s Legends and Treasures sale, which will take place online on September 21, comprises more than 100 lots of rare memorabilia connected to some of the world’s most famous individuals.

The acoustic ax in question was given to a young Riley B. King by his mother’s first cousin in 1931. It was actually the first guitar he ever played. King would go on to become one of the most influential musicians in rock ‘n’ roll history. Indeed, many consider the King of the Blues, who died in 2015, the single most important electric guitarist of the late 20th century. Although the wooden parlor guitar only sports three of the six original strings, it helped spawn a legend and is a true rarity. As a result, it is expected to fetch between $600,000 and $800,000.

That’s not the only item to be offered from the estate of “The Thrill Is Gone” singer, either. The sale also includes King’s handwritten music and a collection of his dazzling on-stage outfits, including a purple jacket he wore in front of the pope at the Vatican. There’s even an African tribal drum that was gifted to the blues musician by former South African leader Nelson Mandela.

Other highlights of the auction include a pair of Jimi Hendrix’s speakers, photos of John Lennon’s last recording sessions, Billie Holiday’s passport and previously unseen pictures of a young Marilyn Monroe. There are historic items up for grabs, too, such as bricks from the first home of Rosa Parks and a sword that stood by John F. Kennedy’s casket in the White House.

“It’s an auction of iconic objects, things that may have no relation to one another…” Arlan Ettinger, Guernsey’s founder and president, told Reuters. “What they do have in common is that in one way or another, they are pretty remarkable—whether they relate to a famous incident or a famous person.”