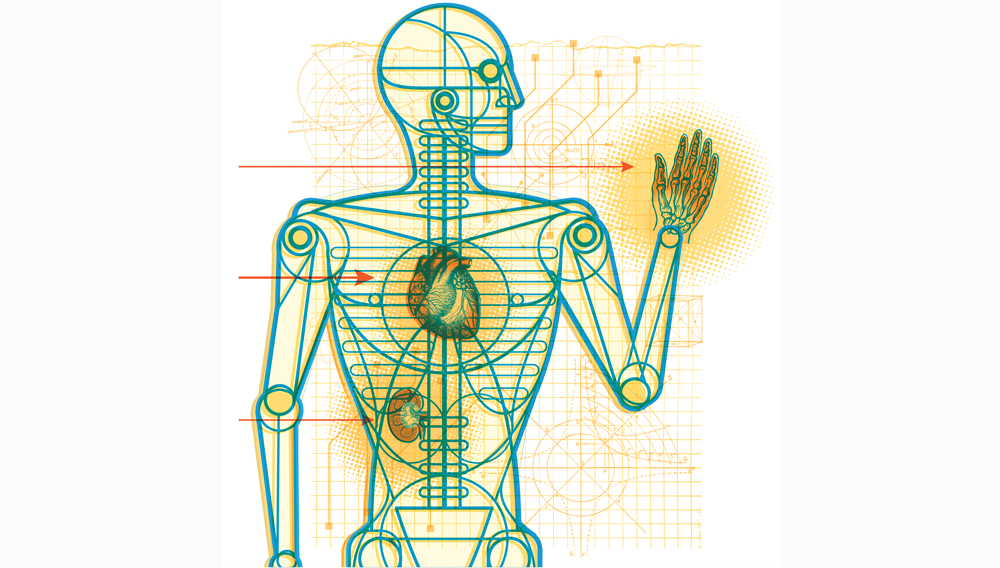 When Thomas Starzl, MD, PhD, stitched a donor kidney into 37-year-old truck driver Bob Phillips in January 1963, he never dreamed that his patient would live to see the next millennium. Hoping for even a five-year survival rate was tempting fate in the early 1960s, an era when it was cause for jubilation when kidney transplantees made it to a year post-operation. Yet in 2012, the men met again to smile and pose for photos. By then, Dr. Starzl was 20 years retired from clinical practice and Phillips had outlived his donor, his younger sister Ruth. The kidney had thrived despite the fact that Ruth’s blood type did not match Bob’s. More remarkable still, Phillips had lived the last 18 of those nearly 50 years without needing immunosuppressive, or antirejection, drugs.

The knowledge gleaned from Phillips and a handful of other long-lived organ recipients has continued to shape the course of transplant medicine, a field that has evolved rapidly. Once considered the purview of fiction—along the lines of Mary Shelley’s Frankenstein—organ or limb transplantation was considered unnatural and akin to interfering in the realm of gods. Just 65 years ago, successful organ transplants were essentially impossible; by 1999, doctors had mastered the transplantation of kidneys, hearts, livers, and other organs and were starting to attempt even more complex transplant surgeries. Last year, New Jersey’s Matt Scott celebrated 15 years with his donated left hand, a world record for a limb recipient. The first partial face transplant took place in France in 2005 and the recipient remains stable; in 2012, Isabelle Dinoire gave a rare interview to the BBC in which she thanked the donor, saying, “She saved my life.” And in September 2014, an anonymous Swedish woman gave birth to the first child gestated successfully in a donor uterus. The mother, who lacked a womb but had healthy ovaries, accepted a uterus from a postmenopausal friend who had given birth twice. Conceived via IVF and delivered by C-section at 32 weeks, the 3-pound, 14-ounce boy was named Vincent, which means “to conquer” in Latin. The organ donor is Vincent’s godmother.

Within the last half-century, the science of organ transplantation has gone from resembling the Apollo lunar program—experimental, expensive, and high-profile—to the Space Shuttle: still extraordinary, still requiring the efforts of platoons of highly trained people, and still expensive, but understood to the point where it is now considered almost routine. Although faces, hands, and wombs continue to edge closer to the Apollo side of the equation, all transplant recipients confront astronomical obstacles, not only in managing their postoperative lives but first finding a suitable donor organ in time to save them.

Several medical breakthroughs were needed to make organ transplantation viable, but the biggest was the creation of effective immunosuppressant drugs, the earliest of which emerged in 1957. It is no coincidence that the first successful human kidney transplant, performed by Joseph Murray, MD, in Boston in 1954, involved identical twins, who do not have to worry about organ rejection. On the cellular level, the body is xenophobic, attacking anything that is not native. Immunosuppressant drugs tamp down the aggressive reaction to non-native cells by weakening the immune system, yet at the risk of admitting infective agents that can devastate or kill.

Also required for transplants to work were new tools and techniques for stitching tiny blood vessels, the development of heart-lung and dialysis machines, and the forging of formal donor-recipient networks like the United Network for Organ Sharing (UNOS). Equally important was a revision of the medical definition of death to include the complete and irreversible loss of cerebral function, aka brain death, which improves the viability of donor organs. The now widespread acceptance of the concept of brain death by doctors, lawyers, ethicists, and the general public was by no means a given.

According to UNOS, nearly 300,000 people in the U.S. are alive today with the help of donor organs. The inherent complexity of the procedure never leaves the mind of Kodi Azari, MD, a surgeon at UCLA who has participated in six hand transplants and is readying for a face and abdominal wall transplant that he anticipates will take place this year. “The operation is the simplest part,” he says of hand transplants. “The surgeon puts it on. But the immunologist keeps it on, and the therapist makes it work.”

Another sign of change is the broad acceptance of organ transplantation. David Hamilton, MD, a retired Scottish transplant surgeon who trained under Sir Peter Medawar (see “Stitches in Time,” page 18) and authored the 2012 book A History of Organ Transplantation: Ancient Legends to Modern Practice, remembers when transplants were disdained in the medical community. “It’s difficult to reconstruct the general hostility,” he says. “It was seen as distasteful and against nature to attempt it.” He says that some staffers at Boston’s Peter Bent Brigham Hospital (now Brigham and Women’s Hospital) tried to stop Murray from operating on Richard and Ronald Herrick in 1954, even though they knew Richard’s immune system would not reject his twin’s kidney. “They were concentrating on harm to the donor,” Dr. Hamilton says, and worried that Murray might end up with two dead patients. While it is rare for a live organ donor to die or suffer serious complications from the operation, it has happened, and doctors are wary of performing surgery on a healthy person.

Dr. Starzl gained a priceless insight into the donor-recipient relationship once his early kidney and liver transplantees began reaching the 25th anniversaries of their operations in the late 1980s and early 1990s. Subsequent studies of Bob Phillips and other long-term survivors showed that all had developed microchimerism: Leukocytes (white cells) from the donor organs had settled throughout their bodies, a sign that the bodies had come to accept the foreign tissues as their own. It also explained the mechanism by which organ acceptance was maintained. Once microchimerism has taken hold, doctors can consider reducing or even eliminating the immunosuppressants these patients were once assumed to need for the rest of their lives.

This finding has made all the difference to Dr. Starzl. “I wrote a depressing paper in 1963 or 1964 that said transplantation had to be considered a palliative form of treatment, not curative. I continued to have that point of view until I discovered that every patient bearing a long-term functioning allograft [a tissue graft that is not genetically identical] had chimerism,” he says. “Just by understanding what the mechanisms were, we can make organ transplants a truly curative operation in some cases.”

We heart the future

Improved immunosuppressant regimens and a greater understanding of microchimerism have allowed more surgeons to attempt challenging operations like hand transplants. In addition to the obstacle posed by managing many different tissues—skin, bone, and muscle—hand transplants pose a stark emotional burden: Unlike a kidney or liver, the patient sees the graft every day. “Not only does it have to be accepted immunologically, it has to be accepted psychologically,” says Dr. Azari. “Initially, patients call it ‘the hand,’ but after a few months, they call it ‘my hand.’ ” Dr. Hamilton, for his part, remains amazed that organ transplantation even works: “Young medical students, just starting, see transplants as a routine service. To an old-timer like me, who knows the trauma of rejection, to see it as an everyday medical therapy continues to surprise me.”

Of even greater surprise might be the paths ahead that could right the tragic supply-demand imbalance. According to the U.S. Department of Health and Human Services, an average of 18 people die every day while waiting for a donor organ. Successful xenografts—the surgical grafting of organs from animals such as pigs or baboons into humans—has long been a dream. In an effort to fulfill that dream, last year Craig Venter, PhD, the scientist who led the effort to decode the human genome, announced that his La Jolla, Calif., company, Synthetic Genomics, had entered a multiyear agreement with United Therapeutics of Silver Spring, Md., to breed genetically altered pigs with lungs fit for transplant.

On the mechanical front, a team that includes William Cohn, MD, of the Texas Heart Institute (THI) in Houston, is at work on a device that can permanently replace a failing heart. He and a THI colleague, renowned heart surgeon O.H. “Bud” Frazier, MD, had implanted the first continuous-flow mechanical heart in 2011 and thus piqued the interest of Daniel Timms, PhD, an Australian who holds a doctorate in biomedical engineering and had brilliant ideas of his own. Dr. Cohn recruited Timms and his team to Texas to create an artificial heart that relies on a single moving part that remains suspended by magnetic levitation.

As of January 2015, the device, dubbed the Bivacor artificial heart, has been shaved down to half the size of a soda can and was performing well in animal trials. “Essentially, all the big problems are solved. The thing works,” says Dr. Cohn, fresh from implanting a Bivacor in a bovine test subject. “It’s all details now.” Those details include ironing out the external aspects of the device—the battery pack and control unit—and scaling them down to the size of two paperbacks. Dr. Cohn hopes to approach the FDA about human trials in two to three years.

The heyday of Cosmas and Damian, twin doctors who, according to legend, grafted a leg onto a patient who had lost one to disease.

Lt. Winston Churchill donates skin to a British officer wounded in the Battle of Omdurman in Sudan.

Austrian surgeon Emerich Ullmann attempts the first non-skin organ transplant between any species, a kidney transplant involving a dog and a goat.

French surgeon Mathieu Jaboulay attempts the first non-skin organ transplants in humans. All were kidney transplants from animals. None of the grafts took.

While tending to injured pilots in Scotland, Peter Medawar suspected that the patients’ immune systems were responsible for rejecting donated skin.

Richard Lawler, MD, a surgeon from Chicago, performs the first human kidney transplant in the U.S.

A Harvard Medical School panel counsels accepting the loss of brain function as the definition of death, opening a new avenue for organ donation.

New Zealander Clint Hallam undergoes the first successful hand transplant. Dissatisfied after issues with chronic rejection, he has it removed in 2001.