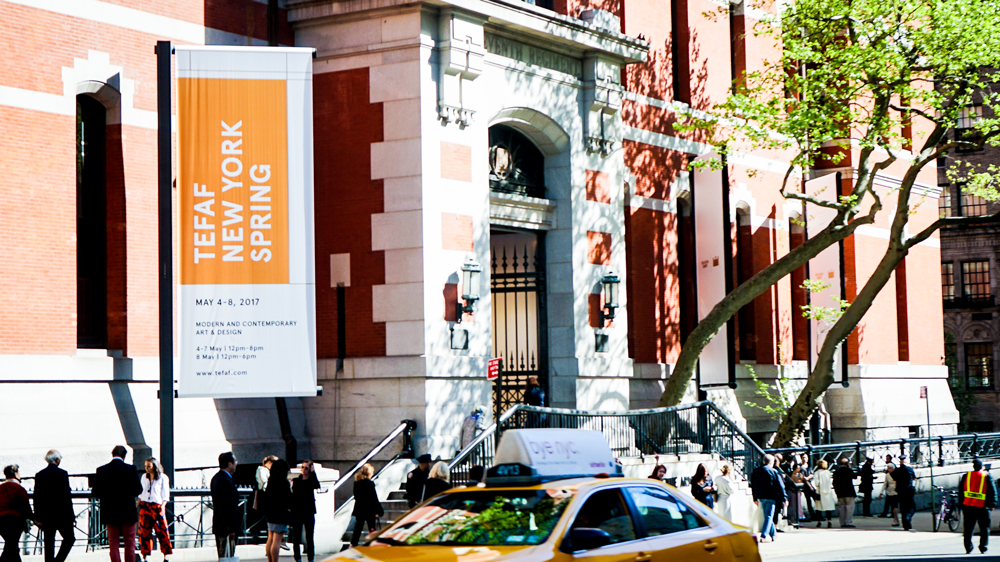 On May 4, the second edition of TEFAF New York Spring steps off at the Park Avenue with a 90-strong roster of galleries purveying the best of the best, with its seasonal emphasis on modern and contemporary art and design. Robb Report caught up with fair co-managing directors Jeff Rabin and Michael Plummer to get a behind-the-scenes look at what attendees have to look forward to for this edition of the event.

For the inaugural edition of the fair, creative director Tom Postma elaborated on the visuals he had created for the TEFAF New York Fall, with its emphasis on more traditional and ancient art. In terms of the fair’s design, have you changed things up a bit?

Jeff Rabin: This Spring we have a phenomenal mix of dealers across the modern and contemporary art and design categories and the juxtaposition of those exhibitors through the run of the Armory is extraordinarily compelling. In terms of the design of the fair itself, the most dramatic change has been in the color of voile used to cloak the heavy paneled walls of the Armory. This year, the corridors of the historic building will be shimmed in royal blue to impart a more contemporary feel. We are also displaying works from our various exhibitors as focal points throughout the public spaces. We have also enhanced the bar and restaurant facilities on the Balcony Café (Panoramic Terrace), partnering with the legendary Raffles to create two special installations that capture the essence of both the Long Bar Singapore and Le Bar Long in Paris. And as always, there will be glorious flowers, a hallmark of the TEFAF enterprise.

Will you be welcoming new exhibitors to the fair for its second edition?

Michael Plummer: We are delighted to welcome 24 new galleries to the TEFAF family, which did not participate in the inaugural Spring Fair in 2017. These include some of the foremost gallerists dealing in modern and contemporary art in the world—among them Larry Gagosian, Marian Goodman, Dominique Lévy and Brett Gorvy of Lévy-Gorvy, Matthew Marks, Robert Mnuchin, and Barbara Gladstone.

The venerable European Fine Art Fair (TEFAF) launched in New York in the fall of 2016, after nearly three decades of holding its main fair in the Dutch city of Maastricht each March? Have you found the city welcoming?

JR: As New Yorkers, Michael and I had high expectations for TEFAF New York and the reception has even exceeded those. We knew it was time for a world class fair encompassing over 7,000 years of art history to be established in North America and we have been humbled by the interest of galleries, dealers, museums, and collectors.

Michael Plummer: Each fair we build on the last and we take note of things that can be implemented to make the next edition of the fair even better. Some of those are simple design changes and changes in dealer placement. This year, our partnership with the Raffles will add a bit more élan to the dining experience. In the end, our goal always to make the experience for all those that attend as captivating as possible. For us, it is critically important that the fair is accessible to everyone, knowledgeable art collectors, art lovers, students, as well as those just beginning their collecting journey. The experience of walking through the space and talking to the exhibitors is unparalleled. Engaging a dealer regarding a work in their booth can be magical as their understanding and excitement about the art is contagious. We encourage people to come out and see the fair and begin what has been a love affair with art for both of us for decades.