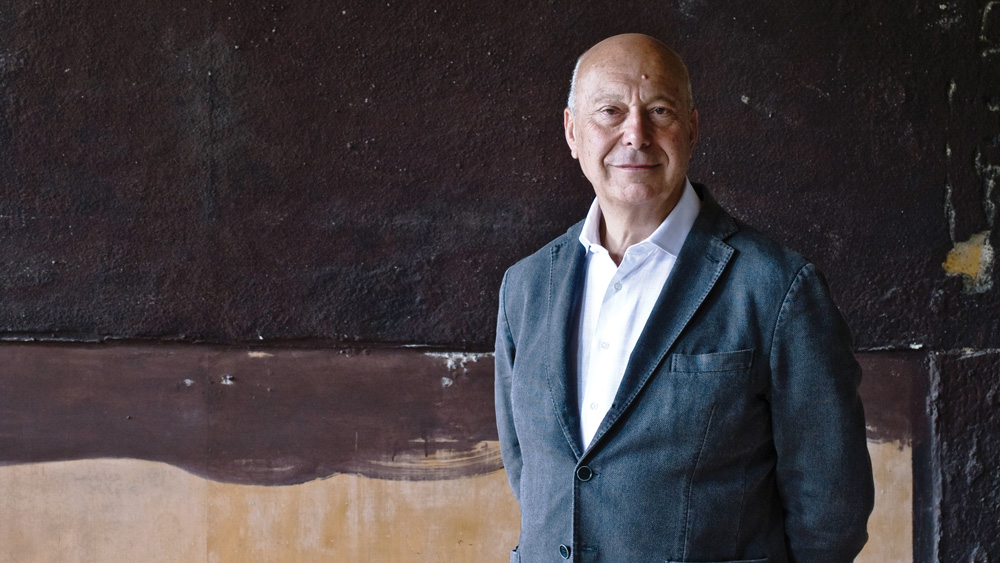 “I just knew this statue was destined to be here,” says Axel Vervoordt of a lacquer-and-gilt-wood Song-dynasty Luóhàn, recounting its acquisition at auction more than a decade ago. “I saw a postage-stamp-sized image of it in the catalog and it just called out to me.” The 13th-century seated figure represents one of the original followers of the Buddha who has attained nirvana—having followed the Eightfold Path to enlightenment—and thus has been freed from want of worldly things. Its emotional resonance may seem a bit of a paradox for the Belgian tastemaker, who over the past five decades has built a formidable reputation creating sublime spaces and building important collections for others. Yet in many ways the Luóhàn epitomizes Vervoordt’s philosophy of his craft: “My task is to eliminate the unnecessary and uncover the essence of things, to give objects a better place and to create spaces that make people happy.”

A Song Dynasty seated figure of a Luóhàn is among Vervoordt’s most prized possessions  Photo: Courtesy Jan Liégeois

The Luóhàn is one of more than three dozen works newly installed at Kanaal—a 600,000-square-foot mixed-use art, commerce, and residential enclave on the banks of the Albert Canal, some 10 miles east of the historic heart of Antwerp, Belgium. Vervoordt unveiled the facility in late November, after nearly 7 years of renovation, reimagination, and redevelopment undertaken with the help of his sons Boris and Dick and the Tokyo-born, Brussels-based architect Tatsuro Miki.

Housed largely within the remains of a mid-19th-century brewing and malting facility, Kanaal serves as the headquarters for Vervoordt’s multifaceted design enterprise while affording ample gallery space for selling exhibitions for artists he represents. Perhaps more important, the Kanaal campus has provided a permanent and publicly accessible venue for much of the vast art collection he and his wife May have entrusted to a family foundation after building it over the course of half a century. When asked about this latest venture, Vervoordt says, “I take great joy in being surrounded by art and being inspired by art, and it is that great joy I wish to share.”

The Vervoordt holdings include more than 600 works, which span some 6,000 years of human history. The oldest objects are predynastic Egyptian makeup palettes from the early 4th millennium BC; among the most recent are site-specific commissions by artists such as Anish Kapoor, whose massive domed crimson void At the Edge of the World (1998) is installed in a former granary at the heart of the property. “Not only is the work centrally located, it serves as the beating heart of Kanaal,” Vervoordt explains during a walkabout.

The collection is particularly rich in postwar works by Zero artists Heinz Mack, Günther Uecker, and Otto Piene and artists associated with the Osaka-based Gutai Art Association. Among the latter are canvases by Kazuo Shiraga, Shozo Shimamoto, Saburo Murakami, and Norio Imai, as well as an important washi-paper work by Fujiko Shiraga. Vervoordt lent several pieces to the 2013 exhibitions Gutai: Splendid Playground at the Guggenheim in New York and Destroy the Picture: Painting the Void, 1949–1962 at the Museum of Contemporary Art in Chicago. (It should come as little surprise that his prescience in seeing the artistic value in these works early on is paying off handsomely as the market for them continues to climb.)

The interior of a 19th-century chapel at the east end of the property has been literally stripped bare, transformed into a serene reliquary for James Turrell’s monumental 1995 light work Red Shift, which until recently had been on view at the Palazzo Fortuny in Venice. A cluster of eight grain silos to the west houses individual works by artists including Takis, Angel Vergara, and Otto Boll. Among the most visually arresting spaces is within a building Vervoordt has dubbed Karnak, after the Middle and New Kingdom site on the east bank of the Nile at Luxor. It encloses a central chamber supported by nearly a dozen brutalist columns, their papyriform shape reminiscent of those supporting Egypt’s ancient temples. At Kanaal, however, these sentinel supports shelter a quartet of Mon-Dvaravati temple sculptures from the 7th and 8th centuries.

The installation and adaptive reuse of this structure and all of those at Kanaal underscore Vervoordt’s approach to presentation, as well as his unending quest to find new uses for old things. Throughout the site, he has sought to emphasize an artistic counterpoint he perceives across space and time—a prime example being his pairing of spatialist Lucio Fontana’s tortured bronze orb Concetto Spaziale Natura (1959–60) with a 17th-century six-panel screen by Japanese master Kano Tan’yu. “There is a Flemish term volledig, which I use to explain how I view my life and work. It means the fullness of emptiness. For me,” says Vervoordt, “it is about keeping the very best and eliminating all but the essentials.”