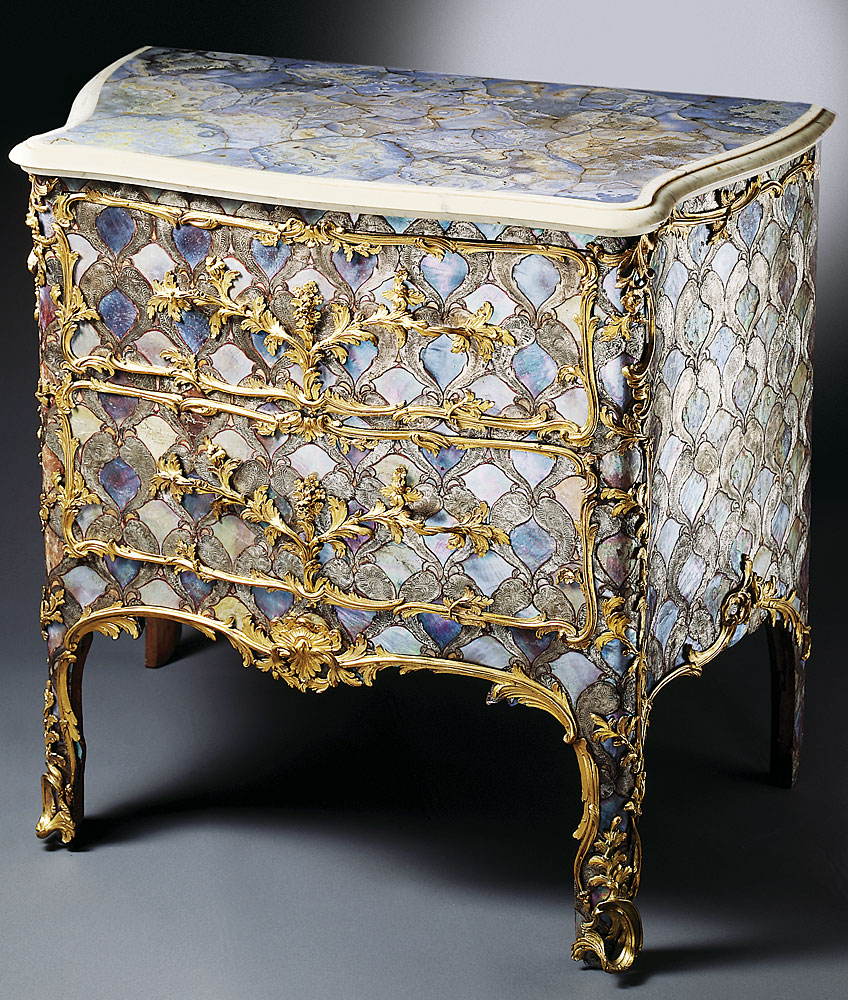 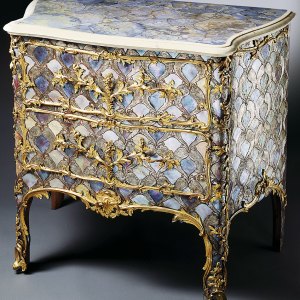 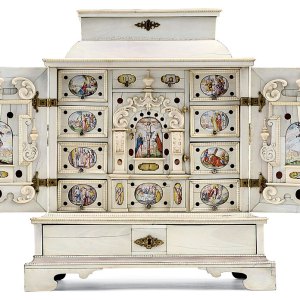 Furniture usually plays only a supporting role at Senger Bamberg Kunsthandel (+49.951.54030, www.senger-bamberg.de); it is the gallery to call if you want a medieval wooden sculpture with personality. Such sculptures might include a 15th-century bust of a long-haired, dreamy-eyed St. Barbara, or a gold-clad St. Catherine of Alexandria looking down on the severed head of her tormentor, the Emperor Maximinus, with a smug expression of triumph. But the gallery recently displayed a dresser that was more compelling than any of its other pieces. Made circa 1740 in Mannheim, Germany, for the castle of the local ruler, it is called a peacock feather chest of drawers for reasons that are evident on sight: The artisans covered the dresser with pieces of silver and mother-of-pearl in a pattern resembling the feathers of a peacock. They also lined the dresser’s edges, drawers, and handles in gilt and crowned it with a white marble top. Simone Senger, a gallery official who is also the daughter of its founder, says only one other such chest is known to exist, and Senger Bamberg’s chest has never before come to market. “It is so small and special, maybe it was made for a woman’s taste. It is in a romantic style, and it’s lockable,” Senger says, sliding a piece of gilt to the left to reveal a keyhole. “Maybe it held love letters.”

Belgian dealer Francis Janssens van der Maelen (+32.2.502.71.80, www.fineart?silver.com) knows he will not find another pair of vases quite like the Le Mer vases that Ernest Carrière made for the Parisian silversmith firm Christofle at the turn of the 20th century. Not only are they the largest set in existence, but Carrière achieved the effect of silver water swirling around golden fish with a technique that would be illegal today because it employs mercury, a toxin, to affix the gold. Though van der Maelen’s range of silver spans several centuries, he offers sculptures and paintings as well. “I can’t find in silver a nice subject like that. It doesn’t exist,” he says, pointing to a 19th-century bust of a beaming maiden with grapes and leaves woven into her hair. “I like very much objects in three dimensions.”

The namesake founder of the gallery Kunstkammer Georg Laue (+49.89.?2781.?8555, www.kunstkammer.com), in Munich, Germany, says he spent 10 years amassing 46 Kunstkammer—antique cabinets made from rare woods, decorated with silver, gold, and ivory, and designed to hold curiosities—and he sold 15 of them in 10 days. The traffic in his booth in March at TEFAF Maastricht, where he debuted the collection, validated his patience. His assistant, Virginie Spenlé, explained that the tinier cabinets did not just store the precious minerals, branches of red coral, and carved amber prized by European princes of the 16th and 17th centuries. “They were collectible pieces by themselves,” she says. “It’s extremely rare to find a small cabinet.”