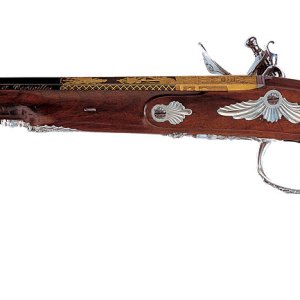 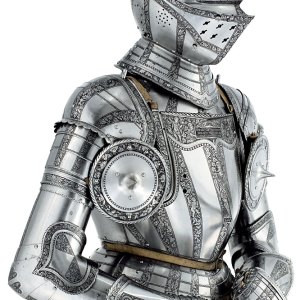 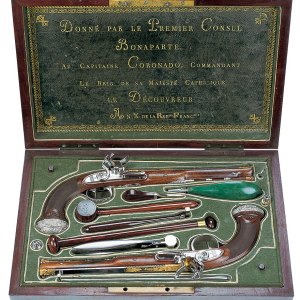 Peter Finer is a different sort of gun nut. Finer’s late father, an experienced skeet shooter, taught him to handle firearms when he was a teenager, and many years later Finer fired off six British cannons—four Napoleonic guns and two from the Raj era—in celebration at the wedding reception of his daughter, Daisy. But he did not become a preeminent dealer in antique arms and armor out of a fondness for weapons. “I love the treasure hunt,” says Finer, who is 63. “My thrill is to go to a small country sale or private house and find things no one has ever seen before.”

Hunting was integral to his education as a dealer. After a short apprenticeship at Sotheby’s followed by a stint at an antiques shop in the 1960s, Finer set out on his own, driving around England in a minibus stripped of its passenger seats, searching for items that he could acquire and then resell to London dealers. “In my first year in business, I made 10,000 pounds, which was the same salary as the prime minister’s,” he recalls, allowing a smile to flicker across his face. “I thought I had made the right career choice.”

Finer displays his trophies at his showrooms in London and rural England, and at the many art and antiques fairs at which he exhibits. His holdings include one of his greatest finds in his four decades as a dealer: a suit of armor made in north Germany in 1549 for Duke Heinrich I of Brunswick-Wolfenbüttel. Craftsmen detailed it with acid etching, a technique in which acid is painted directly on the metal to produce the desired patterns. The 55-pound suit was part of a cache containing more than 200 guns, 50 swords, and 30 suits that Finer purchased from a European collector about six years ago. “That’s the best deal I’ve ever done,” he says. “The 1549 armor is the highlight of the collection.”

It was a highlight at the fairs as well, but it was one among many. Also commanding attention was a set of flintlock pistols fashioned in 1802 at Versailles for Napoléon Bonaparte, still in the original case. Finer also displayed a Japanese hand cannon that is as rare as the German armor and, at 53 pounds, almost as heavy. Craftsmen, perhaps Japanese, made it in 1864, a decade after Commodore Matthew Perry’s black ships forced Japan to end its self-imposed isolation. Finer says that the lavishly decorated, 29-inch firearm, which he purchased from an American collector, typifies his stock. “Much of what we sell is highly decorated to reflect the wealth and status of the owner, who bought it to show the world that he could afford it,” he says. “A lot of these guns are almost male jewelry.”

As of late March, the German suit, the Napoléon pistols, and the Japanese cannon were available for $2.4 million, $1.6 million, and $120,000, respectively, but a fourth item, a 17th-century sculpture of a nobleman lying in state that Finer featured on the cover of his 2008 catalog, sold almost instantly to an American who paid a six-figure sum. The work, which the catalog describes as an “alabaster effigy” and which was probably carved as a funerary monument, seems tangential to Finer’s focus until you realize that the sculptor depicted the mustachioed nobleman in a suit of parade armor and crossed his gauntleted hands over the hilt of a sword. “I’ve always dealt in other things as well, and I’m not interested in dealing in the ordinary,” Finer says. “I want to buy things that I love and would be perfectly happy to live with.”