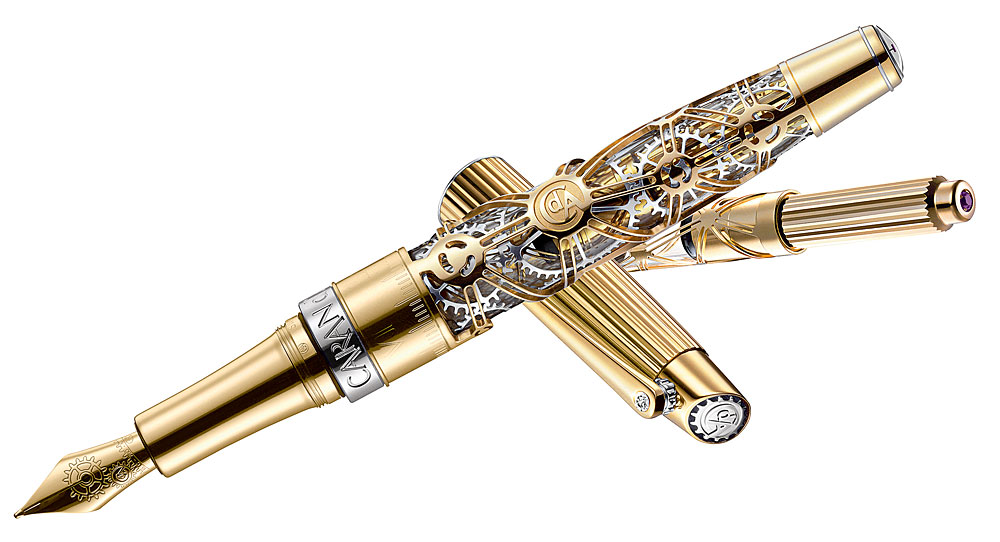 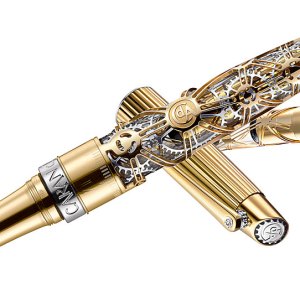 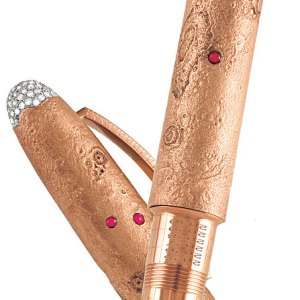 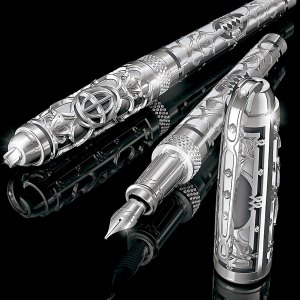 Every detail of the Caran d’Ache 1010 (718.482.7500, www.carandache?.com)—from the tiny screw at the top of the clip to the multidimensional gold overlay of gear wheels and bridges—is intended to evoke a timepiece and thus Switzerland, the pen-making brand’s homeland. The pen, made of 18-karat gold and limited to 10 pieces, is priced at $120,000.

The cap, with its linear engraving, recalls a watch crown, and the clip is reminiscent of a watch hand. The pen’s name, 1010, refers to the hour and minute when a watch’s hands are considered to be in perfect balance. Just as a see-through caseback allows you to see the inner workings of a fine timepiece, the pen’s transparent cap and barrel reveal the intricacies of its piston-pump filling system, which is embellished with a ruby.

The limited-edition Omas Marte (516.741.0011, www.omas.com) fountain pen references man’s fascination with Mars. Made from rose gold and precious gems, the pen’s surface is a miniature map of the red planet, replete with craters and canyons. Olympus Mons, the highest point, and Hellas Planitia, the lowest point, are among the topographical features that are visible. Two carats of brilliant-cut diamonds on each end conjure polar ice, and four rubies set on the sculpted cap and barrel mark the landing spots of U.S.- and Soviet-launched probes. The edition comprises only 30 pens, each priced at $43,000. Marte is the final piece in Omas’ Man’s Journey series. It follows Merveille du Monde, Apollo 11, Atlantide, and Gaia.

S.T. Dupont’s New York 5th Avenue Super Prestige fountain pens (800.341.7003, www.st-dupont.com) pay homage to 1930s and ’40s New York City architecture, particularly Fifth Avenue buildings designed by architects such as Ely Jacques Kahn, who studied at Paris’ École des Beaux-Arts. S.T. Dupont crafted 20 of the diamond-studded, pearl-gray-and-charcoal-colored lacquer pens, each of which is priced at $25,000. The pen is set with 125 diamonds and gilded with white gold in high relief that features a globe design reminiscent of the 1936 statue of Atlas at Rockefeller Center.