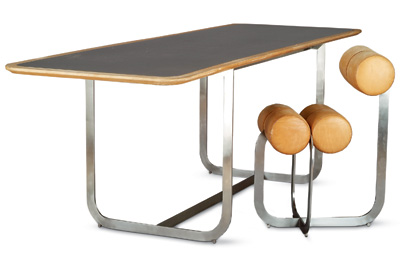 At its booth at the 2005 TEFAF Maastricht fair, London antiques dealer Trevor Philip & Sons displayed an object that no doubt piqued the curiosity of most passersby. The turn-of-the-century brass jockey scales are vaguely sinister-looking and resemble a cross between a ducking stool and an oil derrick. Dangling from one arm of the crossbeam of the structure, which stands almost eight and a half feet tall, is a chair, freshly reupholstered in green leather, where a jockey would sit. Suspended from the other arm is a platform that holds a selection of weights ranging from 8 ounces to 56 pounds. A small brass object shaped like a lightbulb hangs above the platform; it would have been filled with buckshot to obtain the jockey’s precise weight.

British company W & T Avery designed the scales so that they were portable and easily assembled, because race officials had to erect them at many different venues. Saf Waterman, director of the gallery and son of its founder and chairman, Trevor Waterman, explains that the piece came to their attention about a year ago, adding with a grin, “Maybe it will end up with a racehorse owner from Kentucky.”

Predictions aside, the scales, which are priced at more than $85,000, typify the items that distinguish the 32-year-old gallery. “You want to hit people with something that isn’t obvious, and you want them to really think about what they’re looking at,” says Saf. Indeed, the booth at Maastricht, the world’s premier art and antiques fair, was full of items that demanded contemplation, or at least a second look: a carved ivory elephant with two riders seated on its back in a howdah, an 18th-century French admiralty model of a privateer, a collection of antique keys, a handsome wooden postbox that was used at an English country house or estate, and a series of 28 turned wooden goblets from the 17th century, each paper-thin vessel fitting inside the next like a nesting doll. These were displayed alongside conventional but equally stunning antique chess sets, globes, and scientific instruments, which Saf estimates constitute about 70 percent of the gallery’s inventory.

Trevor, 65, obtained his first scientific instrument at age 10, when he saved his allowance for 12 weeks so that he could pay the one pound, 10 shillings price for a Victorian-era microscope. Economics trumped science a month later, when his physics teacher offered him five pounds for it. “I was fascinated by its construction: It had lots of knobs and moving parts, and it was aesthetically beautiful,” he recalls. “But once I sold it, I realized I could make a profit.”

He opened his original gallery on Penny Lane in Liverpool, England, and ultimately relocated to Jermyn Street in London in 1986. More than three decades later, he finds the business as exciting as he did when he was a boy. “I love the chase,” Trevor says. “I love hearing about an object, researching it, following up, and, more hopefully, selling it.” —Sheila Gibson Stoodley

At a Christie’s auction of 20th-century decorative arts last year, a steel wave desk made in the 1970s by French designer Maria Pergay sold for $32,000, nearly three times the estimated value. The selling price came as little surprise to Yves Gastou, owner of Paris’ Galerie Yves Gastou, a dealer in French furniture produced from the 1940s through the 1970s. Gastou was among the first to recognize the collectability of pieces from this era. Rules at Paris’ 2004 Biennale des Antiquaires prevented him from presenting furniture pieces more recent than those from the 1940s, but his gallery’s inventory includes many examples of the best in 1970s design. Among these are a red Plexiglas-topped steel table by Marie-Claude de Fouquiére and a one-of-a-kind polished steel and leather dining set by Gaudin.

“What makes pieces from this period collectible is they are very pure in their design and they mix well with a variety of styles,” Gastou says, adding that many are one-offs incorporating novel uses of steel and bronze that were often too expensive to put into production. Such inventiveness made these designs unusual in their day and enhances their appeal today.  —William Kissel

Jaime Eguiguren remembers the first valuable antique that he acquired and sold: a kakemono (a Japanese ornamental scroll), which he purchased at age 16. “I bought it for $500 and sold it the next day for $2,500,” he says. Now 44, Eguiguren runs Jaime Eguiguren Arte y Antigüedades in Buenos Aires, Argentina, and while Japanese scrolls are not part of his stock, he does handle precious objects from Latin America and antiques that were made in Europe and imported across the Atlantic. His booth at the 2005 TEFAF Maastricht fair featured numerous outstanding pieces, including a chest and matching table decorated with mother-of-pearl, and wrought iron gates originally made for a monastery in Spain in the 16th or 17th century. “I like to buy very special things,” says Eguiguren. “Everything that you see here is different, not just the furniture or the sculptures. All the pieces are unique.” —Sheila Gibson Stoodley

Among the treasures in Paris’ Galerie Gismondi is a commode decorated with boulle (metal and tortoiseshell marquetry), which once belonged to Marie Antoinette. Beside it is an oversize pietre dure (stone marquetry) box inlaid with semiprecious metal and stone and made as a gift for Italy’s Ferdinand de’ Medici. These pieces represent a sampling of the offerings that Jean Gismondi exhibited at the 2004 Biennale des Antiquaires in Paris. Antiques of this caliber usually are difficult to come by, but not for Gismondi, one of France’s foremost dealers in boulle and pietre dure designs from the 17th and 18th centuries. Such works frequently appear in his gallery because he often buys back pieces he sold years earlier. One example, an 18th-century pietre dure Regency table that he sold two decades ago for five figures, was repurchased earlier this year and resold at the 2004 Biennale for more than $1 million. —William Kissel