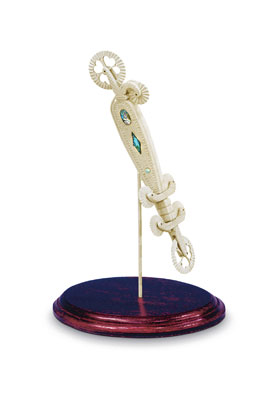 Janice Hyland and husband Alan Granby’s approach to art and antiques fairs is homegrown. The booth displays of Hyland Granby Antiques, the couple’s Hyannis Port, Mass., gallery of nautical artifacts, include marine paintings, scrimshaw, and navigational instruments, all of which are positioned by Hyland. She plots the layouts weeks beforehand in what the couple calls the “barn,” an area that they added to their Cape Cod home 10 years ago so that she could arrange their inventory in a space that approximates an exhibit booth. These test-runs have helped Hyland find innovative ways to show delicate models of antique ships. “I like to display the ships without covers. It draws a lot of attention because people like to see the intricacy of things,” Hyland says, explaining that she surrounds the models with larger items that prevent visitors from moving too close. “She plans the booth and has a natural, God-given talent for making it look great,” Granby says. “I could never do it like she does it.”

Their house is not a storefront—Hyland and Granby conduct most of their business at fairs—though it is enmeshed in their gallery pursuits. The house is itself an antique that includes a decommissioned 32-foot-high lighthouse, which was built in 1849 and overlooks Nantucket Sound. When the pair purchased the property in 1985, it was in such disrepair that they had to spend two years renovating it to render it habitable. Today, a pair of antique globes decorates the dining room, a stack of Nantucket baskets graces a small table near a side entrance, and a 5-foot-long model of the Thomas W. Lawson, the only seven-masted schooner ever built, dominates the library, which holds most of the 3,000 research books that the couple has accumulated during 28 years in the antiques business.

Every marine antique, with the ex­ception of about 30 items that Granby acquired before the two opened their first gallery in Dennis, Mass., in 1978, was once available for clients to purchase. (The globes still are.) “Anything we buy, we offer for sale for at least two years, even if we want it ourselves,” Hyland says. After that time, the item becomes part of their home. However, the couple did bend this rule to sell a particularly fine carved wooden eagle by John Bellamy, which they had offered for $325,000. Hyland and Granby received a surge of inquiries after the deadline had passed, but neither wanted to sell. “Finally, a guy who had built an excellent folk art collection called and wanted to buy it,” Granby says. “We felt it would go to a better home than ours, so we let him buy it.”

Granby and Hyland met in 1970, when both were teaching at the same Massachusetts elementary school. (They married in 1995.) In 1978, at Hyland’s suggestion, they opened a shop on Cape Cod to sell the nautical antiques that Granby had been collecting since 1974. Granby continues to spearhead the gallery’s acquisitions. “I find the items, and if we both agree to buy them, we do. But she has more guts,” Granby says, recalling how when the price of an exquisite specimen of whale’s tooth scrimshaw rose past his limit at a recent auction, Hyland urged him to continue bidding.

“Early on, we were offered fabulous pieces, and we couldn’t afford them,” Hyland says. “Today, we don’t see 45 great pieces of scrimshaw at auction anymore, we see two. When we see something that we think is great, it’s hard to pass up.”